Advertisement - You can get this game from STEAM
Not to be confused with cactus; nearly all cacti are succulents but not all succulents are cacti. 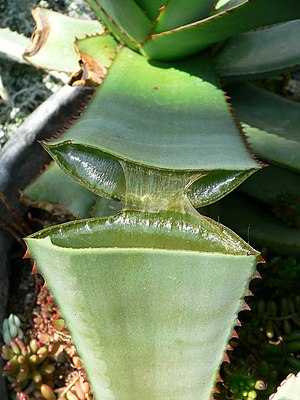 Succulent plants have thickened stems, or leaves, such as this Aloe.

In botany, succulent plants, also known as succulents, are plants with parts that are thickened, fleshy, and engorged, usually to retain water in arid climates or soil conditions. The word succulent comes from the Latin word sucus, meaning 'juice', or 'sap'.[1] Succulent plants may store water in various structures, such as leaves and stems. Some definitions also include roots, thus geophytes that survive unfavorable periods by dying back to underground storage organs may be regarded as succulents. In horticultural use, the term succulent is sometimes used in a way which excludes plants that botanists would regard as succulents, such as cacti. Succulents are often grown as ornamental plants because of their striking and unusual appearance, as well as their ability to thrive with relatively minimal care.

Many plant families have multiple succulents found within them (over 25 plant families).[2] In some families, such as Aizoaceae, Cactaceae, and Crassulaceae, most species are succulents. The habitats of these water preserving plants are often in areas with high temperatures and low rainfall, such as deserts. Succulents have the ability to thrive on limited water sources, such as mist and dew, which makes them equipped to survive in an ecosystem which contains scarce water sources. 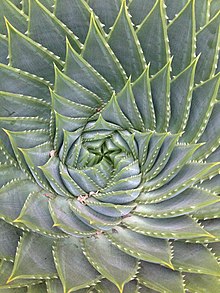 Center of a succulent (Aloe polyphylla)

A general definition of succulents is that they are drought resistant plants in which the leaves, stem, or roots have become more than usually fleshy by the development of water-storing tissue.[3] Other sources exclude roots as in the definition "a plant with thick, fleshy and swollen stems and/or leaves, adapted to dry environments".[4] This difference affects the relationship between succulents and "geophytes" – plants that survive unfavorable seasons as a resting bud on an underground organ.[5] These underground organs, such as bulbs, corms and tubers, are often fleshy with water-storing tissues. Thus if roots are included in the definition, many geophytes would be classed as succulents. Plants adapted to living in dry environments such as succulents are termed xerophytes. However, not all xerophytes are succulents, since there are other ways of adapting to a shortage of water, e.g., by developing small leaves which may roll up or having leathery rather than succulent leaves.[6] Nor are all succulents xerophytes, since plants like Crassula helmsii are both succulent and aquatic.[7]

Those who grow succulents as a hobby use the term in a different way from botanists. In horticultural use, the term succulent regularly excludes cacti. For example, Jacobsen's three volume Handbook of Succulent Plants does not cover cacti,[8] and "cacti and succulents" is the title or part of the title of many books covering the cultivation of these plants.[9][10][11] However, in botanical terminology, cacti are succulents.[3] Horticulturists may also exclude other groups of plants, e.g., bromeliads.[12] A practical, but unscientific, horticultural definition is "a succulent plant is any desert plant that a succulent plant collector wishes to grow."[13] Such plants less often include geophytes (in which the swollen storage organ is wholly underground) but do include plants with a caudex,[14] which is a swollen above-ground organ at soil level, formed from a stem, a root or both.[5]

A further difficulty is that plants are not either succulent or non-succulent. In many genera and families there is a continuous gradation from plants with thin leaves and normal stems to those with very clearly thickened and fleshy leaves or stems, so that deciding what is a succulent is often arbitrary. Different sources may classify the same species differently.[15]

A collection of succulent plants, including cacti, from the Jardin botanique d'Èze, France

The storage of water often gives succulent plants a more swollen or fleshy appearance than other plants, a characteristic known as succulence. In addition to succulence, succulent plants variously have other water-saving features. These may include:

Other than Antarctica, succulents can be found within each continent. While it is often thought that most succulents come from dry areas such as steppes, semi-desert, and desert, the world's driest areas do not make for proper succulent habitats. Australia, the world's driest inhabited continent, hosts very few native succulents due to the frequent and prolonged droughts. Even Africa, the continent with the most native succulents, does not host many of the plants in its most dry regions.[17] However, while succulents are unable to grow in these harshest of conditions, they are able to grow in conditions that are uninhabitable by other plants. In fact, many succulents are able to thrive in dry conditions, and some are able to last up to two years without water depending on their surroundings and adaptations.[18] Succulents may also occasionally occur as epiphytes, growing on other plants with limited or no contact with the ground, and are dependent on their ability to store water and gain nutrients by other means; this niche is seen in Tillandsia. Succulents also occur as inhabitants of sea coasts and dry lakes, which are exposed to high levels of dissolved minerals that are deadly to many other plant species. Potted succulents are able to grow in most indoor environments with minimal care.[19] 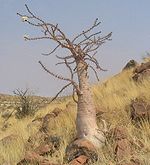 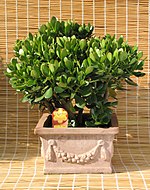 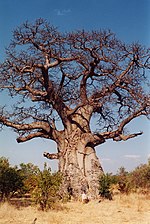 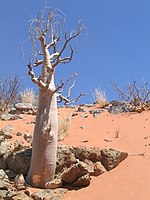 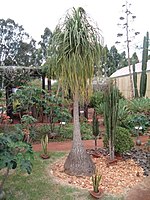 Succulents kept at 25 °C (77 °F) in a Connecticut greenhouse 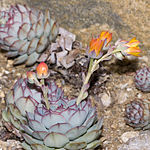 There are approximately sixty different plant families that contain succulents.[20] Plant orders, families, and genera in which succulent species occur are listed below.

There are also some gymnosperms:

For some families and subfamilies, most members are succulent; for example the Cactaceae, Agavoideae, Aizoaceae, and Crassulaceae.

The table below shows the number of succulent species found in some families:[citation needed] 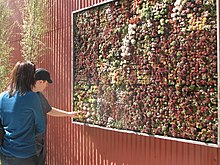 Succulent wall in a nursery in San Francisco, United States consisting of Sempervivum, Echeveria and Crassula

Succulents are favored as houseplants for their attractiveness and ease of care. If properly potted, succulents require little maintenance to survive indoors.[27] Succulents are very adaptable houseplants and will thrive in a range of indoor conditions.[28] For most plant owners, over-watering and associated infections are the main cause of death in succulents.[29]

Succulents can be propagated by different means. The most common is vegetative propagation; this includes cuttings where several inches of stem with leaves are cut and after healing produce a callus. After a week or so, roots may grow. A second method is division consisting of uprooting an overgrown clump and pulling the stems and roots apart. A third method is propagation by leaf by allowing the formation of a callus. During this method, a bottom leaf is fully removed from the plant often by twisting or cutting. The leaf then dries out and a callus forms preventing the leaf from absorbing too much moisture and thus rotting. This method typically takes up to a few weeks to produce healthy roots that would eventually create new plants.[30] The vegetative propagation can be different according to the species.[31]