Wayback Machine Equator Tropic of Cancer
This article is about the geographical area. For other uses, see Horse latitudes (disambiguation).
Subtropical latitudes 30–35 degrees north and south 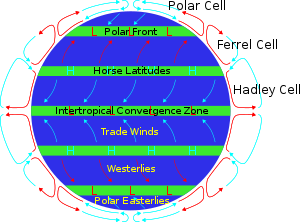 A diagram showing the relative positions of the Horse latitudes

It is the product of the global air circulation cell known as the Hadley Cell. The subtropical ridge is characterized by mostly calm winds, which act to reduce air quality under its axis by causing fog overnight, and haze during daylight hours as a result of the stable atmosphere found near its location. The air descending from the upper troposphere flows out from its center at surface level toward the upper and lower latitudes of each hemisphere, creating both the trade winds and the westerlies. The subtropical ridge moves poleward during the summer, reaching its highest latitude in early fall, before moving equatorward during the cold season. The El Niño southern climate oscillation (ENSO) can displace the northern hemisphere subtropical ridge, with La Niñas allowing for a more northerly axis for the ridge, while El Niños show flatter, more southerly ridges. The change of the ridge position during ENSO cycles changes the tracks of tropical cyclones that form around their equatorward and western peripheries. As the subtropical ridge varies in position and strength, it can enhance or depress monsoon regimes around their low-latitude periphery.

The consistently warm, dry, and sunny conditions of the horse latitudes are the main cause for the existence of the world's major non-polar deserts, such as the Sahara Desert in Africa, the Arabian and Syrian deserts in the Middle East, the Mojave and Sonoran deserts in the southwestern United States and northern Mexico, all in the Northern Hemisphere; and the Atacama Desert, the Kalahari Desert, and the Australian Desert in the Southern Hemisphere.

A likely and documented explanation is that the term is derived from the "dead horse" ritual of seamen (see Beating a dead horse). In this practice, the seaman paraded a straw-stuffed effigy of a horse around the deck before throwing it overboard. Seamen were paid partly in advance before a long voyage, and they frequently spent their pay all at once, resulting in a period of time without income. If they got advances from the ship's paymaster, they would incur debt. This period was called the "dead horse" time, and it usually lasted a month or two. The seaman's ceremony was to celebrate having worked off the "dead horse" debt. As west-bound shipping from Europe usually reached the subtropics at about the time the "dead horse" was worked off, the latitude became associated with the ceremony.[1]

An alternative theory, of sufficient popularity to serve as an example of folk etymology, is that the term horse latitudes originates from when the Spanish transported horses by ship to their colonies in the West Indies and Americas. Ships often became becalmed in mid-ocean in this latitude, thus severely prolonging the voyage; the resulting water shortages made it impossible for the crew to keep the horses alive, and they would throw the dead or dying animals overboard.[2]

A third explanation, which simultaneously explains both the northern and southern horse latitudes and does not depend on the length of the voyage or the port of departure, is based on maritime terminology: a ship was said to be 'horsed' when, although there was insufficient wind for sail, the vessel could make good progress by latching on to a strong current. This was suggested by Edward Taube in his article "The Sense of "Horse" in the Horse Latitudes" (Journal of Geography, October 1967).[3] He argued the maritime use of 'horsed' described a ship that was being carried along by an ocean current or tide in the manner of a rider on horseback. The term had been in use since the end of the seventeenth century. Furthermore, The India Directory [4] in its entry for Fernando de Noronha, an island off the coast of Brazil, mentions it had been visited frequently by ships "occasioned by the currents having horsed them to the westward".

Heating of the earth near the equator leads to large amounts of convection along the monsoon trough or Intertropical convergence zone. This air mass rises to the lower stratosphere where it diverges, moving away from the equator in the upper troposphere in both northerly and southerly directions. As it moves towards the mid-latitudes on both sides of the equator, the air cools and sinks. The resulting air mass subsidence creates a subtropical ridge of high pressure near the 30th parallel in both hemispheres. At the surface level, the sinking air diverges again with some returning to the equator, completing the Hadley circulation. This circulation on each side of the equator is known as the Hadley cell and leads to the formation of the subtropical ridge.[5] Many of the world's deserts are caused by these climatological high-pressure areas.

The subtropical ridge shows up as a large area of black (dryness) on this water vapor satellite image from September 2000.

When the Atlantic Multidecadal Oscillation's mode is favorable to tropical cyclone development (1995–present), it amplifies the subtropical ridge across the central and eastern Atlantic.[9]

On the subtropical ridges western edge (generally on the eastern coast of continents), the high pressure cell creates a southerly flow of tropical air. In the United States the subtropical ridge Bermuda High helps create the hot, sultry summers with daily thunderstorms with buoyant airmasses typical of the Gulf of Mexico and East Coast of the United States. This flow pattern also occurs on the eastern coasts of continents in other subtropical climates such as South China, southern Japan, central-eastern South America Pampas, southern Queensland and KwaZulu Natal province in South Africa.[13]

When surface winds become light, the subsidence produced directly under the subtropical ridge can lead to a buildup of particulates in urban areas under the ridge, leading to widespread haze.[14] If the low level relative humidity rises towards 100 percent overnight, fog can form.[15]