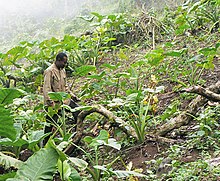 A Bakweri farmer working on his taro field on the slopes of Mount Cameroon (2005).

Subsistence agriculture occurs when farmers grow food crops to meet the needs of themselves and their families.[1] In subsistence agriculture, farm output is targeted to survival and is mostly for local requirements with little or no surplus. Planting decisions are made principally with an eye toward what the family will need during the coming year, and secondarily toward market prices.[1] Tony Waters[2] writes: "Subsistence peasants are people who grow what they eat, build their own houses, and live without regularly making purchases in the marketplace.[3][1]"

Despite the primacy of self-sufficiency in subsistence farming, today most subsistence farmers also participate in trade to some degree, though usually it is for goods that are not necessary for survival, and may include sugar, iron roofing sheets, bicycles, used clothing, and so forth. Most subsistence farmers today reside in developing countries.[4] Although their amount of trade as measured in cash is less than that of consumers in countries with modern complex markets, many have important trade contacts and trade items that they can produce because of their special skills or special access to resources valued in the marketplace.[4]

Subsistence agriculture has several characteristics which are, it requires small capital/finance, mixed cropping is mostly practiced, there is limited use of agrochemicals e.g. pesticides and fertilizer, unimproved varieties of crops and animals are used, there is little or no surplus for sale, it involves the use of crude/traditional tools such as hoes, machetes/cutlasses, it involves mainly the production of food crops, it is done on small scattered land, it uses family/unskilled labour, and yield is low

Subsistence agriculture was the dominant mode of production in the world until recently, when market-based capitalism became widespread.[5] Subsistence horticulture may have developed independently in South East Asia and Papua New Guinea.

Subsistence agriculture had largely disappeared in Europe by the beginning of World War I, and in North America with the movement of sharecroppers and tenant farmers out of the American South and Midwest during the 1930s and 1940s.[2] As recently as the 1950s, it was still common on family farms in North America and Europe to grow much of a family's own food and make much of its own clothing, although sales of the farm's production earned enough currency to buy goods. Many of the items, as well as occasional services from physicians, veterinarians, blacksmiths and others, were often bought with barter rather than currency.

In Central and Eastern Europe subsistence and semi-subsistence agriculture reappeared within the transition economy since about 1990.[6]

Subsistence farming continues today in large parts of rural Africa,[7] and parts of Asia and Latin America. In 2015, about 2 billion people (slightly more than 25% of the world's population) in 500 million households living in rural areas of developing nations survive as "smallholder" farmers, working less than 2 hectares (5 acres) of land.[8]

In this type of agriculture, a patch of forest land is cleared by a combination of felling (chopping down) and burning, and crops are grown. After 2–3 years the fertility of the soil begins to decline, the land is abandoned and the farmer moves to clear a fresh piece of land elsewhere in the forest as the process continues.[9] While the land is left fallow the forest regrows in the cleared area and soil fertility and biomass is restored. After a decade or more, the farmer may return to the first piece of land. This form of agriculture is sustainable at low population densities, but higher population loads require more frequent clearing which prevents soil fertility from recovering, opens up more of the forest canopy, and encourages scrub at the expense of large trees, eventually resulting in deforestation and land erosion.[10] Shifting cultivation is called dredd in India, ladang in Indonesia, milpa in Central America and Mexico and jhumming in North East India.

While this ”slash-and-burn” technique may describe the method for opening new land, commonly the farmers in question have in existence at the same time smaller fields, sometimes merely gardens, near the homestead there they practice intensive ”non-shifting" techniques until shortage of fields where they can employ "slash and burn" to clear land and (by the burning) provide fertilizer (ash). Such gardens near the homestead often regularly receive household refuse, and the manure of any household, chickens or goats are initially thrown into compost piles just to get them out of the way. However, such farmers often recognize the value of such compost and apply it regularly to their smaller fields. They also may irrigate part of such fields if they are near a source of water.

In some areas of tropical Africa, at least, such smaller fields may be ones in which crops are grown on raised beds. Thus farmers practicing ”slash and burn” agriculture are often much more sophisticated agriculturalists than the term "slash and burn" subsistence farmers suggests.

In this type of farming people migrate along with their animals from one place to another in search of fodder for their animals. Generally they rear cattle, sheep, goats, camels and/or yaks for milk, skin, meat and wool.[11] This way of life is common in parts of central and western Asia, India, east and southwest Africa and northern Eurasia. Examples are the nomadic Bhotiyas and Gujjars of the Himalayas. They carry their belongings, such as tents, etc., on the backs of donkeys, horses, and camels.[11] In mountainous regions, like Tibet and the Andes, yak and llama are reared. Reindeer are the livestock in arctic and sub-arctic areas. Sheep, goats, and camels are common animals, and cattle and horses are also important.[11][12]

In intensive subsistence agriculture, the farmer cultivates a small plot of land using simple tools and more labour.[13] Climate, with large number of days with sunshine and fertile soils, permits growing of more than one crop annually on the same plot. Farmers use their small land holdings to produce enough for their local consumption, while remaining produce is used for exchange against other goods. It results in much more food being produced per acre compared to other subsistence patterns. In the most intensive situation, farmers may even create terraces along steep hillsides to cultivate rice paddies. Such fields are found in densely populated parts of Asia, such as in the Philippines. They may also intensify by using manure, artificial irrigation and animal waste as fertilizer. Intensive subsistence farming is prevalent in the thickly populated areas of the monsoon regions of south, southwest, and southeast Asia.[13]

Subsistence agriculture can be used as a poverty alleviation strategy, specifically as a safety net for food-price shocks and for food security. Poor countries are limited in fiscal and institutional resources that would allow them to contain rises in domestic prices as well as to manage social assistance programs, which is often because they are using policy tools that are intended for middle- and high-income countries.[14] Low-income countries tend to have populations in which 80% of poor are in rural areas and more than 90% of rural households have access to land, yet a majority of these rural poor have insufficient access to food.[14] Subsistence agriculture can be used in low-income countries as a part of policy responses to a food crisis in the short and medium term, and provide a safety net for the poor in these countries.[14]