Air Chief Marshal Sir Stuart William Peach, GBE, KCB, DL (born 22 February 1956) is a senior Royal Air Force officer. After training as a navigator, Peach commanded IX (Bomber) Squadron and then became Deputy Station Commander RAF Bruggen. He was deployed as NATO Air Commander (Forward) in Kosovo in 2000. He went on to be Chief of Defence Intelligence in 2006, Chief of Joint Operations in 2009 and the first Commander of Joint Forces Command in December 2011 before being appointed Vice-Chief of the Defence Staff in May 2013. Peach succeeded General Sir Nick Houghton as Chief of the Defence Staff on 14 July 2016. He succeeded General Petr Pavel as Chairman of the NATO Military Committee on 29 June 2018.

Peach was born on 22 February 1956 in Staffordshire, England, to Clifford Peach and Jean Mary Peach.[1] He was educated at Aldridge Grammar School, in Aldridge, Staffordshire.[2] He studied geography, economics, and social history at the University of Sheffield, graduating with a Bachelor of Arts (BA) degree in 1977.[1][2] He later studied at Downing College, Cambridge, and completed a Master of Philosophy (MPhil) degree in 1997.[1]

A Tornado GR1 in 1988: Peach served as a navigator on this type of aircraft

Peach was appointed an acting pilot officer on 1 September 1974[3] and was commissioned on graduation from university as a substantive pilot officer on 15 July 1977;[4] he was promoted to flying officer on 15 January 1978[5] and to flight lieutenant on 15 October 1978.[6] A navigator, Peach was posted to No. 13 Squadron in 1979[1] and served a tour on the English Electric Canberra in the photographic reconnaissance role before being transferred to IX (Bomber) Squadron in 1982 where he served on the ground attack variant of the Panavia Tornado in the UK.[7] He transferred to No. 31 Squadron in 1984 and served on the Tornado in Germany.[7] Promoted to squadron leader on 1 July 1986,[8] he became a Qualified Weapons Instructor[7] and received the Queen's Commendation for Valuable Service in the Air in the 1990 Birthday Honours List.[9]

After Staff College in 1990 he returned to Germany to serve as Personal Staff Officer to, in turn, Deputy Commander RAF Germany, Commander-in-Chief RAF Germany and Commander Second Allied Tactical Air Force (of which RAF Germany formed a part),[7] being promoted to wing commander on 1 July 1991.[10] Peach saw action as a Detachment Commander in Saudi Arabia during Operation Jural.[2] From 1994 to 1996 Peach commanded IX (Bomber) Squadron operating in the Strike, Attack and SEAD role, also acting as Deputy Station Commander RAF Bruggen.[7] 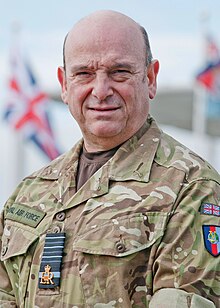 Following promotion to group captain on 1 July 1996,[11] Peach became Director Defence Studies (Royal Air Force) in 1997, commissioning scholarship, editing books and writing articles on air power: he secured an MPhil from Downing College, Cambridge at that time.[1] In 1999 he was appointed Assistant Director of the Higher Command and Staff Course at the Joint Services Command and Staff College (having previously graduated from that course).[7]

Peach served as Commander British Forces Italy from 1999 to 2000 and NATO Air Commander (Forward) in Kosovo in 2000,[7] as a result of which he was appointed a Commander of the Order of the British Empire on 6 April 2001.[12] He was then appointed Commandant of the Air Warfare Centre[13] and Assistant Chief of Staff Intelligence[7] at RAF Strike Command, being promoted to air commodore on 1 January 2001.[14]

Peach married Brigitte Ender in 1986; they have one son and one daughter.[1] He is President of the RAF Rugby League;[2] he is interested in sport, military history and cooking[1] and has an honorary DTech degree from Kingston University[2] and an honorary LittD degree from the University of Sheffield.[31] He is an Honorary Fellow of Downing College, Cambridge.[32] 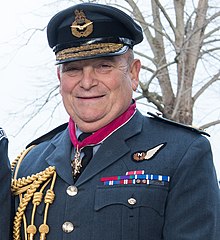 Peach in 2018, having been awarded the US Legion of Merit