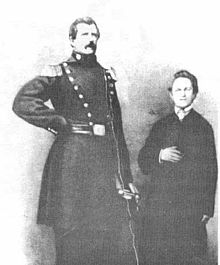 Angus MacAskill was a notable strongman.

In the 19th century, the term strongman referred to an exhibitor of strength or similar circus performers who performed feats of strength. More recently, strength athletics, also known as strongman competitions, have grown in popularity. These competitions are now composed of a variety of events in which competitors have to move the highest weights possible, the winner being the one having the highest tally across all events.[1]

In the past, strongmen would perform various feats of strength such as the bent press (not to be confused with the bench press, which did not exist at the time), supporting large amounts of weight held overhead at arm's length, steel bending, chain breaking, etc. Large amounts of wrist, hand, and tendon strength were required for these feats, as well as prodigious oblique strength.

In the late 20th century the term strongman evolved to describe one who competes in strength athletics – a more modern eclectic strength competition in which competitors display their raw functional strength through exercises such as lifting rocks, toting refrigerators, pulling trains, towing an eighteen-wheel truck behind them, etc. The most famous competitions of this type are the World's Strongest Man, the Arnold Strongman Classic, the Strongman Champions League and the Giants Live tour, however many countries hold national-level competitions.

In recent years, interest in the sport at the grassroots level has skyrocketed, leading to the spontaneous formation of local clubs, loosely affiliated with provincial/state and national associations.

Many sports-specific training facilities have begun to incorporate movements associated with strongman competitions into their general training schemes, albeit with lighter weights used, e.g. tyre flips, sled drags, object loading or carrying, log pressing, farmer's walks and so on.

Training for strongman involves building overall strength in the gym and training with competition implements to gain familiarity. In the gym, it is necessary to train the entire body for strength, especially with variants of the squat, deadlift, and overhead press. Also important is explosive power, developed by weightlifting-style lifts, and cardiovascular conditioning. Grip strength must also be developed.

Although you can do general strength training, at a typical gym, training with a strongman regimen requires equipment not typically found in a gym. Some equipment used in a strongman competition would have to be found custom-made or at a strongman gym. These equipment include Atlas Stone, Log (Log Press), Farmers Walk Bars, Yoke (Yoke Walk), Keg (Keg Toss), a vehicle.

Another part of a strongman's training is its intense diet regime. A top athlete in strongman would need to ingest upwards of 10,000 calories a day.

Though competitive strongman events are ever changing, there are a number of staples that frequently appear on the international stage,[2] including:

Strongman is often incorrectly used to describe a person who does weightlifting or bodybuilding. Due to the circus and entertainment background, nineteenth-century bodybuilders were expected to mingle with the crowd during intermission and perform strength feats like card tearing, nail bending, etc. to demonstrate strength as well as symmetry and size. Also, many strongmen sold photos of themselves nude or near-nude, flexing and posing. Although, what they considered the epitome of male beauty was different from modern ideals – particularly the very low emphasis on chest size, and great emphasis on oblique size, and symmetry as evidenced by photos of Eugen Sandow.

The following competing strongmen have finished in the top three of World's Strongest Man, from 1977 to 2019: