Advertisement - You can get this game from STEAM
This article is about the former administrative region. For other uses, see Strathclyde (disambiguation). 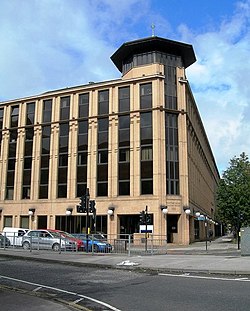 Strathclyde (Srath Chluaidh [s̪t̪ɾa ˈxl̪ˠɯi] in Gaelic, meaning "strath (valley) of the River Clyde") was one of nine former local government regions of Scotland created in 1975 by the Local Government (Scotland) Act 1973 and abolished in 1996 by the Local Government etc. (Scotland) Act 1994. The Strathclyde region had 19 districts. The region was named after the medieval Kingdom of Strathclyde but covered a broader geographic area than its namesake.

The area was on the west coast of Scotland and stretched from the Highlands in the north to the Southern Uplands in the south. As a local government region, its population, in excess of 2.5 million, was by far the largest of the regions and contained half of the nation's total.[1] The Region was responsible for education (from nursery to colleges); social work; police; fire; sewage; strategic planning; roads; transport – and, therefore, employed almost 100,000 public servants (almost half were teachers, lecturers and others in the education service).[2][3]

The regional administrative headquarters was in the city of Glasgow, and politics were by and large dominated by the Labour Party. The first regional council convener was the Reverend Geoff Shaw, who died in 1978. It was largely due to his leadership that the Region forged its innovative strategy on multiple deprivation, which remained its central commitment to the end of the Region's life through "Social Strategy for the Eighties" (1982) and "SS for the 90s".[4]

Having lain empty for some years,[5] the Strathclyde Regional Council heaquarters' debating chambers were used for a short period in 2000 by the Scottish Parliament, with its new permanent home at Holyrood under construction and the temporary buildings in Edinburgh booked out.[6] The Strathclyde HQ buildings were eventually demolished in the 2010s.[7]

The name is still in use as a transport area, covered by Strathclyde Partnership for Transport. The area covered by SPT however is smaller than the region, as most of Argyll and Bute lies outside its remit.

The region was formed from the county of the City of Glasgow, the counties of Ayr, Bute, Dunbarton, Lanark, and Renfrew, and parts of the counties of Argyll (all except the district of Ardnamurchan and the electoral divisions of Ballachulish and Kinlochleven), and the county of Stirling (the burgh of Kilsyth, Western No. 3 district, the electoral division of Kilsyth West, and the polling district of Kilsyth East (Banton)).[8][9][10]

Since 1996 the area of the region has been divided between 12 council areas: Argyll and Bute, East Ayrshire, East Dunbartonshire, East Renfrewshire, Glasgow City (created as City of Glasgow), Inverclyde, North Ayrshire, North Lanarkshire, Renfrewshire, South Ayrshire, South Lanarkshire, and West Dunbartonshire (created as Dumbarton and Clydebank), all created to be entirely within the area of the region.

The region was named after the ancient British or Brythonic Damnonii Kingdom of Strathclyde. The kingdom broadly covered the northern end of the region, except an area now covered by the Scottish Argyll and Bute council area and the Isle of Arran, which is now within the Scottish North Ayrshire council area, plus the Scottish Dumfries and Galloway council area and part of the English county of Cumbria.