The Strait of Malacca (Malay: Selat Melaka, Indonesian: Selat Malaka, Thai: ช่องแคบมะละกา, Tamil: மலாக்கா நீரிணை, Malākkā nīriṇai, Chinese: 馬六甲海峽/马六甲海峡) or Straits of Malacca is a narrow stretch of water, 890 km (550 mi) in length, between the Malay Peninsula (Peninsular Malaysia) and the Indonesian island of Sumatra.[2] As the main shipping channel between the Indian Ocean and the Pacific Ocean, it is one of the most important shipping lanes in the world. It is named after the Malacca Sultanate that ruled over the archipelago between 1400 and 1511, the center of administration of which was located in the modern-day state of Malacca, Malaysia.

The International Hydrographic Organization define the limits of the Strait of Malacca as follows:[3]

On the North. The Southwestern coast of the Malay Peninsula. 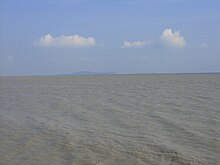 The Strait of Malacca as viewed from the city of Malacca, Malaysia. Pulau Besar is visible in the distance.

Early traders from Arabia, Africa, Persia, and the Southern Indian kingdoms reached Kedah before arriving at Guangzhou. Kedah served as a western port on the Malay Peninsula. They traded glassware, camphor, cotton goods, brocades, ivory, sandalwood, perfume, and precious stones. These traders sailed to Kedah via the monsoon winds between June and November. They returned between December and May. Kedah provided accommodations, porters, small vessels, bamboo rafts, elephants, as well as tax collections for goods to be transported overland toward the eastern ports of the Malay Peninsula such as Langkasuka and Kelantan. After the Tenth Century, ships from China began to trade at these eastern trading posts and ports. Kedah and Funan were famous ports throughout the 6th century, before shipping began to utilize the Strait of Malacca itself as a trade route.

In the 7th century the maritime empire of Srivijaya based on Palembang, Sumatra, rose to power, and its influence expanded to the Malay peninsula and Java. The empire gained effective control on two major choke points in maritime Southeast Asia; the Strait of Malacca and the Sunda Strait. By launching a series of conquests and raids on potential rival ports on both sides of the strait, Srivijaya ensured its economic and military domination in the region, which lasted for about 700 years. Srivijaya gained great benefits from the lucrative spice trade, e.g. the tributary trade system with China, and trade with Indian and Arab merchants. The Strait of Malacca became an important maritime trade route between India and China. The importance of the Strait of Malacca in global trade networks continued well into later centuries with the rise of the Malacca Sultanate in the 15th century, the Johor Sultanate, and the rise of the modern city-state of Singapore.

Since the 17th century, the strait has been the main shipping channel between the Indian Ocean and the Pacific Ocean. Different major regional powers managed the straits during different historical periods.[4]

In the early 19th century, the Dutch and British empires drew an arbitrary boundary line in the strait and promised to hunt down pirates on their respective sides; that line went on to become today's border between Malaysia and Indonesia.[2] The strait was already established as one of the world's busiest shipping lanes, with Indonesia controlling the majority of the sea lane.[5] 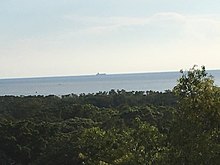 A ship sailing on the Strait of Malacca, as seen from Bukit Melawati in Kuala Selangor

From an economic and strategic perspective, the Strait of Malacca is one of the most important shipping lanes in the world.

The strait is the main shipping channel between the Indian Ocean and the Pacific Ocean, linking major Asian economies such as India, Thailand, Indonesia, Malaysia, Philippines, Singapore, China, Japan, Taiwan, and South Korea. Over 94,000 vessels[6] pass through the strait each year (2008) making it the busiest strait in the world,[7] carrying about 25% of the world's traded goods, including oil, Chinese manufactured products, coal, palm oil and Indonesian coffee.[8] About a quarter of all oil carried by sea passes through the Strait, mainly from Persian Gulf suppliers to Asian markets. In 2007, an estimated 13.7 million barrels per day were transported through the strait, increasing to an estimated 15.2 million barrels per day in 2011.[9] In addition, it is also one of the world's most congested shipping choke points because it narrows to only 2.8 km (1.5 nautical miles) wide at the Phillips Channel (close to the south of Singapore).[10]

The maximum size (specifically draught) of a vessel that can pass through the Strait is referred to as Malaccamax, that is, for some of the world's largest ships (mostly oil tankers), the Strait's minimum depth (25 metres or 82 feet) is not deep enough. This is determined by the relatively shallow Singapore Strait, which provides passage to the Karimata Strait in the east. The next closest passageway (the Sunda Strait between Sumatra and Java) is even more shallow and narrow. Therefore, ships exceeding the Malaccamax must detour a few thousand nautical miles and use the Lombok Strait, Makassar Strait, Sibutu Passage, and Mindoro Strait instead.

See also: Piracy in the Strait of Malacca

Piracy has been a problem in the strait. Piracy had been high in the 2000s, with additional increase after the events of September 11, 2001.[11] After attacks rose again in the first half of 2004, regional navies stepped up their patrols of the area in July 2004. Subsequently, attacks on ships in the Strait of Malacca dropped, to 79 in 2005 and 50 in 2006.[12] Recent reports indicate that attacks have dropped to near-zero levels in recent years.[13]

There are 34 shipwrecks, some dating to the 1880s, in the local TSS channel (the channel for commercial ships under the global Traffic Separation Scheme). These pose a collision hazard in the narrow and shallow strait.[14]

On 20 August 2017, the United States Navy destroyer USS John S. McCain lost ten of its crew's lives in a collision with the merchant ship Alnic MC a short distance east of the strait whilst full steering capabilities had been lost and making a series of errors in attempted mitigation, its external lights being changed to "red over red" ("vessel not under command").[15] 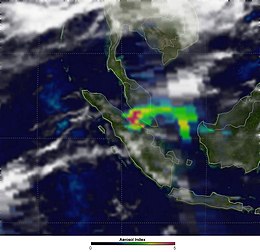 Another risk is the annual haze due to bush fires in Sumatra, Indonesia. It may reduce visibility to 200 metres (660 ft), forcing ships to slow down in the busy strait. The strait is frequently used by ships longer than 350 metres (1,150 ft).[16]

Proposals to relieve the strait

Thailand has developed plans to divert much of the strait's traffic and hence some of its economic significance to a shorter route: the Thai government has, several times, proposed to cut a canal through the Isthmus of Kra, saving around 960 kilometres (600 mi) from the journey between the two oceans. China has offered to cover the costs, according to a report leaked to The Washington Times in 2004. Nevertheless, and despite the support of several Thai politicians, the prohibitive financial and ecological costs suggest that such a canal will not be built.

An alternative is to install a pipeline across the Isthmus of Kra to carry oil to ships waiting on the other side. Proponents calculate it would cut the cost of oil delivery to Asia by about $0.50/barrel ($3/m3). Myanmar has also made a similar pipeline proposal.

Gallery of nearby important channels