Steuben County /stuːˈbɛn/ is a county located in the U.S. state of New York. As of the 2010 census, the population was 98,990.[1] Its county seat is Bath.[2] Its name is in honor of Baron von Steuben, a Prussian general who fought on the American side in the American Revolutionary War, though it is not pronounced the same (German: [fɔn ˈʃtɔʏbn̩]). There is no direct link between the Baron von Steuben and modern Steuben County, which he never visited (and in his day was near-wilderness).

Although it is not much mentioned because it does not fit well into the standard narrative of New York State history, in its earliest years Steuben County was demographically and geographically linked to the Susquehanna River basin in Pennsylvania, leading to the port of Baltimore. The Canisteo River, navigable as far as Arkport, emptied into the Chemung River and it into the Susquehanna. There were no natural barriers, like the Cohoes Falls on the Mohawk, to impede transportation, and timber and other agricultural products were easily shipped downriver from what are today (2019) the towns of Addison, Canisteo, and Hornellsville. Prior to the opening of the Erie Canal in 1825, followed by the railroads, communication with the Hudson Valley and New York City was difficult. Limited to horses, mules, and donkeys, it was far too expensive to be used to ship bulky agricultural products.

In 1892 a bill was introduced in the Legislature to split Steuben County, with Canisteo, Corning, and "the south towns" becoming Lincoln County. It did not pass.[3] 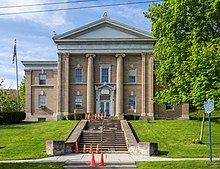 Steuben County is part of:

The largest employer in Steuben County is Corning, Inc. (formerly Corning Glass Works), the world headquarters of a large firm (34,000 employed worldwide) which manufactures specialty glass and related products. Related is the nearby Corning Museum of Glass. There is a wine industry in Hammondsport, also the headquarters of the Mercury Corporation, a custom manufacturer, formerly of aircraft and aircraft components. There is a museum of aviation, the Glenn H. Curtiss Museum, in Hammondsport. Former industries in Steuben County are the Steuben Glass Works, in Corning, and the Erie Railroad repair shops, in Hornell.

There is one institution of post-secondary education in Steuben County: Corning Community College. Alfred University and Elmira College are nearby.