listen); 30 March 1892 – 31 August 1945) was a Polish mathematician[1] who is generally considered one of the world's most important and influential 20th-century mathematicians. He was the founder of modern functional analysis,[2] and an original member of the Lwów School of Mathematics. His major work was the 1932 book, Théorie des opérations linéaires (Theory of Linear Operations), the first monograph on the general theory of functional analysis.

Born in Kraków, Banach attended IV Gymnasium, a secondary school, and worked on mathematics problems with his friend Witold Wilkosz. After graduating in 1910, Banach moved to Lwów (today called Lviv) . However, during World War I Banach returned to Kraków, where he befriended Hugo Steinhaus. After Banach solved some mathematics problems which Steinhaus considered difficult, they published their first joint work. In 1919, with several other mathematicians, Banach formed a mathematical society. In 1920 he received an assistantship at the Lwów Polytechnic. He soon became a professor at the Polytechnic, and a member of the Polish Academy of Learning. He organized the "Lwów School of Mathematics". Around 1929 he began writing his Théorie des opérations linéaires.

After the outbreak of World War II, in September 1939, Lwów was taken over by the Soviet Union. Banach became a member of the Academy of Sciences of Ukraine and was dean of Lwów University's Department of Mathematics and Physics. In 1941, when the Germans took over Lwów, all institutions of higher education were closed to Poles. As a result, Banach was forced to earn a living as a feeder of lice at Rudolf Weigl's Institute for Study of Typhus and Virology. While the job carried the risk of infection with typhus, it protected him from being sent to slave labor in Germany and from other forms of repression. When the Soviets recaptured Lwów in 1944, Banach reestablished the University. However, because the Soviets were removing Poles from Soviet-annexed formerly-Polish territories, Banach prepared to return to Kraków. Before he could do so, he died in August 1945, having been diagnosed seven months earlier with lung cancer.

Stefan Banach was born on 30 March 1892 at St. Lazarus General Hospital in Kraków, then part of the Austro-Hungarian Empire, into a Góral Roman Catholic family[3] and was subsequently baptised by his father, while his mother abandoned him upon this event and her identity is ambiguous.[4][5] Banach's parents were Stefan Greczek and Katarzyna Banach, both natives of the Podhale region.[6][7] Greczek was a soldier in the Austro-Hungarian Army stationed in Kraków. Little is known about Banach's mother.[8] According to his baptismal certificate, she was born in Borówna and worked as a domestic help.[7]

Unusually, Stefan's surname was his mother's instead of his father's, though he received his father's given name, Stefan. Since Stefan Greczek was a private and was prevented by military regulations from marrying, and the mother was too poor to support the child, the couple decided that he should be reared by family and friends.[9] Stefan spent the first few years of his life with his grandmother, but when she took ill Greczek arranged for his son to be raised by Franciszka Płowa and her niece Maria Puchalska in Kraków. Young Stefan would regard Franciszka as his foster mother and Maria as his older sister.[10] In his early years Banach was tutored by Juliusz Mien, a French intellectual and friend of the Płowa family, who had emigrated to Poland and supported himself with photography and translations of Polish literature into French. Mien taught Banach French and most likely encouraged him in his early mathematical pursuits.[11]

In 1902 Banach, aged 10, enrolled in Kraków's IV Gymnasium (also known as the Goetz Gymnasium). While the school specialized in the humanities, Banach and his best friend Witold Wiłkosz (also a future mathematician) spent most of their time working on mathematics problems during breaks and after school.[12] Later in life Banach would credit Dr. Kamil Kraft, the mathematics and physics teacher at the gymnasium with kindling his interests in mathematics.[13] While generally Banach was a diligent student he did on occasion receive low grades (he failed Greek during his first semester at the gymnasium) and would later speak critically of the school's math teachers.[14]

After obtaining his matura (high school degree) at age 18 in 1910, Banach moved to Lwów (today called Lviv) with the intention of studying at the Lwów Polytechnic. He initially chose engineering as his field of study since at the time he was convinced that there was nothing new to discover in mathematics.[15] At some point he also attended Jagiellonian University in Kraków on a part-time basis. As Banach had to earn money to support his studies it was not until 1914 that he finally, at age 22, passed his high school graduation exams.[16]

When World War I broke out, Banach was excused from military service due to his left-handedness and poor vision. When the Russian Army opened its offensive toward Lwów, Banach left for Kraków, where he spent the rest of the war. He made his living as a tutor at the local gymnasiums, worked in a bookstore and as a foreman of road building crew. He attended some lectures at the Jagiellonian University at that time, including those of the famous Polish mathematicians Stanisław Zaremba and Kazimierz Żorawski, but little is known of that period of his life.[17] 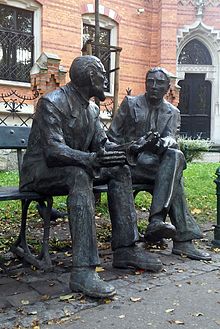 In 1916, in Kraków's Planty gardens, Banach encountered Professor Hugo Steinhaus, one of the renowned mathematicians of the time. According to Steinhaus, while he was strolling through the gardens he was surprised to overhear the term "Lebesgue integral" (Lebesgue integration was at the time still a fairly new idea in mathematics) and walked over to investigate. As a result, he met Banach, as well as Otto Nikodym.[18] Steinhaus became fascinated with the self-taught young mathematician. The encounter resulted in a long-lasting collaboration and friendship. In fact, soon after the encounter Steinhaus invited Banach to solve some problems he had been working on but which had proven difficult. Banach solved them within a week and the two soon published their first joint work (On the Mean Convergence of Fourier Series). Steinhaus, Banach and Nikodym, along with several other Kraków mathematicians (Władysław Ślebodziński, Leon Chwistek, Alfred Rosenblatt and Włodzimierz Stożek) also established a mathematical society, which eventually became the Polish Mathematical Society.[19] The society was officially founded on 2 April 1919. It was also through Steinhaus that Banach met his future wife, Łucja Braus. 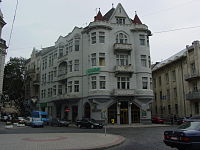 Steinhaus introduced Banach to academic circles and substantially accelerated his career. After Poland regained independence in 1918, Banach was given an assistantship at the Lwów Polytechnic. Steinhaus' backing also allowed him to receive a doctorate without actually graduating from a university. The doctoral thesis, accepted by King John II Casimir University of Lwów in 1920 [20] and published in 1922,[21] included the basic ideas of functional analysis, which was soon to become an entirely new branch of mathematics. The thesis was widely discussed in academic circles and allowed him in 1922 to become a professor at the Lwów Polytechnic. Initially an assistant to Professor Antoni Łomnicki, in 1927 Banach received his own chair. In 1924 he was also accepted as a member of the Polish Academy of Learning. At the same time, from 1922, Banach also headed the second Chair of Mathematics at University of Lwów.

Young and talented, Banach gathered around him a large group of mathematicians. The group, meeting in the Scottish Café, soon gave birth to the "Lwów School of Mathematics". In 1929 the group began publishing its own journal, Studia Mathematica, devoted primarily to Banach's field of study—functional analysis. Around that time, Banach also began working on his best-known work, the first monograph on the general theory of linear-metric space. First published in Polish in 1931,[22] the following year it was also translated into French and gained wider recognition in European academic circles.[23] The book was also the first in a long series of mathematics monographs edited by Banach and his circle. In 17 June 1924 Banach become a correspondence member of the Polish Academy of Sciences and Fine Arts in Kraków.

Following the invasion of Poland by Nazi Germany and the Soviet Union, Lwów came under the control of the Soviet Union for almost two years. Banach, from 1939 a corresponding member of the Academy of Sciences of Ukraine, and on good terms with Soviet mathematicians,[8] had to promise to learn Ukrainian to be allowed to keep his chair and continue his academic activities.[24] Following the German takeover of Lwów in 1941 during Operation Barbarossa, all universities were closed and Banach, along with many colleagues and his son, was employed as lice feeder at Professor Rudolf Weigl's Typhus Research Institute. Employment in Weigl's Institute provided many unemployed university professors and their associates protection from random arrest and deportation to Nazi concentration camps.

After the Red Army recaptured Lviv in the Lvov–Sandomierz Offensive of 1944, Banach returned to the University and helped re-establish it after the war years. However, because the Soviets were removing Poles from annexed formerly Polish territories, Banach began preparing to leave the city and settle in Kraków, Poland, where he had been promised a chair at the Jagiellonian University.[8] He was also considered a candidate for Minister of Education of Poland.[25] In January 1945, however, he was diagnosed with lung cancer and was allowed to stay in Lwów. He died on 31 August 1945, aged 53. His funeral at the Lychakiv Cemetery was attended by hundreds of people.[25]

Decomposition of a ball into two identical balls - the Banach–Tarski paradox.

Banach's dissertation, completed in 1920 and published in 1922, formally axiomatized the concept of a complete normed vector space and laid the foundations for the area of functional analysis. In this work Banach called such spaces "class E-spaces", but in his 1932 book, Théorie des opérations linéaires, he changed terminology and referred to them as "spaces of type B", which most likely contributed to the subsequent eponymous naming of these spaces after him.[26] The theory of what came to be known as Banach spaces had antecedents in the work of the Hungarian mathematician Frigyes Riesz (published in 1916) and contemporaneous contributions from Hans Hahn and Norbert Wiener.[20] For a brief period in fact, complete normed linear spaces were referred to as "Banach–Wiener" spaces in mathematical literature, based on terminology introduced by Wiener himself. However, because Wiener's work on the topic was limited, the established name became just Banach spaces.[26]

Likewise, Banach's fixed point theorem, based on earlier methods developed by Charles Émile Picard, was included in his dissertation, and was later extended by his students (for example in the Banach–Schauder theorem) and other mathematicians (in particular Brouwer and Poincaré and Birkhoff). The theorem did not require linearity of the space, and applied to any complete Cauchy space (in particular to any complete metric space).[20]

The Hahn–Banach theorem, is one of the fundamental theorems of functional analysis.[20] 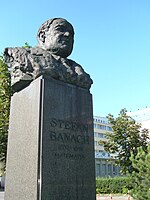 Stanislaw Ulam, another mathematician of the Lwów School of Mathematics, in his autobiography, quotes Banach as saying:

"Banach was my greatest scientific discovery."[28]