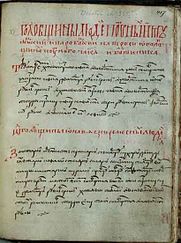 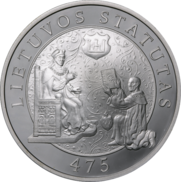 First page of the Latin copy of Laurentius (1531) of the First Statute of Lithuania. Statutes of Lithuania were translated to Latin because of its superior terminology and to avoid ambiguity. Augustinus Rotundus was the most active proponent of Latin usage in the GDL.

The main purpose of the First Statute was to standardise and collect various tribal and customary laws in order to codify them as a single document.

The First Statute was drafted in 1522 and came into force in 1529 by the initiative of the Lithuanian Council of Lords. It has been proposed that the codification was initiated by Grand Chancellor of Lithuania Mikołaj Radziwiłł as a reworking and expansion of the Casimir Code.[1] The first edition was redrafted and completed by his successor Albertas Goštautas, who assumed the position of the Grand Chancellor of Lithuania in 1522.

The second statute came into effect in 1566 by the order of the King of Poland and Grand Duke of Lithuania, Sigismund II Augustus, and was larger and more advanced. The Grand Duke did this because of pressure from the Lithuanian nobility, as the expansion of nobles' rights since the publication of the first statute had made it redundant. The second statute was prepared by a special commission, consisting of ten members, appointed by the Grand Duke and the Council of Lords.

The Third Statute was accepted in 1588 in response to the Union of Lublin, which created the Polish-Lithuanian Commonwealth. The main author and editor of this statute was the great Chancellor of Lithuania Lew Sapieha of Ruthenian origin. The statute was the first one to be printed (in contrast to the handwritten statutes before) in Ruthenian language using Cyrillic alphabet. Translations of the statute were printed in Muscovite Russia and also in Poland, where at that time laws were not thoroughly codified and the Lithuanian statute was consulted in some cases where the corresponding or comparably similar Polish laws were unclear or missing.

The statute reorganized and modified existing law, and also included new laws. Novel features included a tendency toward severe penalties, including capital punishment, which was in line with the general reactionary retributive trend in contemporary European law (cf. Malleus Maleficarum). The statute also provided that crimes committed by or against people from different social ranks were punished alike, following the idea of equal worth of human life. Yet the hurdles for a peasant to have a noble tried and convicted were higher than the other way around. The statute was supported by Lithuanian magnates, as it granted them special powers and privileges allowing them to keep the lesser Lithuanian nobility[citation needed] and peasants in check. As a token for being acknowledged as Grand Duke of Lithuania, Sigismund III Vasa revised the Union of Lublin and approved the Third Lithuanian Statute.

Many features of the statute were not in line with the provisions of the Union of Lublin, which is not at all mentioned in the statute. In this category fall e.g. the provisions about distributing local offices only to native people (or to people who had bought that status). So, too, do the many, detailed provisions about the Lithuanian estates' assemblies which eventually were abolished by the Lublin union treaty. Thus, in everyday legal practice, the statute trumped and even usurped the union treaty.

A group often opposing the statute was the Polish nobility, which viewed such inconsistencies as unconstitutional, particularly since the Union of Lublin stipulated that no law could conflict with the law of the Union. The statute, however, in turn, declared the laws that conflicted with itself to be unconstitutional. Statutes of Lithuania were also used in territories of Lithuania annexed by Poland shortly before the Union of Lublin. These conflicts between statutory schemes in Lithuania and Poland persisted for many years.

The third variant of the Statute had particularly many humane features, such as: double compensations for killing or hurting a woman; prohibition to enslave a free man for any crime; freedom of religion; and a recommendation to acquit the accused when there is a lack of evidence, instead of punishing the innocent. It was in force in the territory of Lithuania until 1840 when it was replaced by the Russian laws.[2] Until then, many Russian peasants and even nobles (e.g., Andrey Kurbsky) were fleeing from despotism in the neighboring Tsardom of Russia to Lithuania.[3]

Copies of the statutes used to be kept in each powiat (district) so they could be used and seen by each person desiring to do so.[citation needed]

Attempts by the Lithuanian nobility to limit the power of Lithuanian magnates led to the equalization of laws movement, culminating in the reforms of the election sejm of 1697 (May–June),[4] confirmed in the coronation sejm of September 1697 in the document Porządek sądzenia spraw w Trybunale Wielkiego Księstwa Litewskego.[5] These reforms limited the jurisdiction and competency of several Lithuanian offices, such as those of the hetman, kanclerz (chancellor), marszałek (marshal) and podskarbi (under-treasurer), to equate them with those of the corresponding offices in the Polish crown. Many of these offices at the time were held by members of the Sapieha family, and the changes were at least partly made with a view to reducing their power. The reforms also instituted Polish as the administrative language, replacing Ruthenian, in written documents and court proceedings, contradicting the wording of the Third Statute.[6][7]

The Statutes of Lithuania were a sign of the progressive European legal tradition, and were cited as precedent in Polish and Livonian courts. Furthermore, they had a major influence on the 1649 encoding of the Russian legal code, Sobornoye Ulozheniye. After forming an association with Poland—including both the dynastic union (1385–1569) and the confederated Polish-Lithuanian Commonwealth (1569–1795)—the Lithuanian Statutes were the Grand Duchy's greatest expression of independence.[citation needed]

In 1791, efforts were made to change the system and do away with the privileges of the nobility, creating a constitutional monarchy with a modern citizenry (see Constitution of 3 May). However, these plans came to naught when Russia, abetted by Austria and Prussia, partitioned the Commonwealth, although leaving the Lithuanian Statutes in effect in Lithuania until 1840.