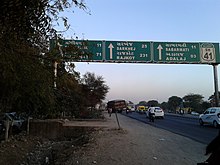 A stretch of Gujarat SH 41

The State highways in India are network of roads maintained by the state governments. It is constructed and managed by the states' Public Works Department. The state highways are usually roads that link important cities, towns and district headquarters within the state and connect them with National Highways or state highways of neighbouring states.

Bharatmala, a centrally-sponsored and funded road and highways project of the Government of India [2] with a target of constructing 83,677 km (51,994 mi)[3] of new highways, has been started in 2018. Phase I of the Bharatmala project involves the construction of 34,800 km of highways (including the remaining projects under NHDP) at an estimated cost of ₹5.35 lakh crore (US$75 billion) by 2021–22.[4]