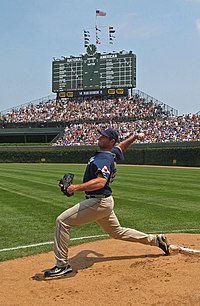 Chris Young warms up in the bullpen before a game at Wrigley Field minutes before the 12:05 start (see scoreboard clock).

In baseball (hardball or softball), a starting pitcher or starter is the first pitcher in the game for each team. A pitcher is credited with a game started if they throw the first pitch to the opponent's first batter of a game. Starting pitchers are expected to pitch for a significant portion of the game, although their ability to do this depends on many factors, including effectiveness, stamina, health, and strategy.

A starting pitcher in professional baseball usually rests three, four, or five days after pitching a game before pitching another. Therefore, most professional baseball teams have four, five or six starting pitchers on their rosters. These pitchers, and the sequence in which they pitch, is known as the rotation. In modern baseball, a five-man rotation is most common.[1]

In contrast, a pitcher who enters the game after the first pitch of the game is a relief pitcher. Occasionally, an opening pitcher is used for only a few innings, and is replaced by a long reliever or a pitcher who would typically be a starting pitcher.

Under ideal circumstances, a manager of a baseball team would prefer a starting pitcher to pitch as many innings as possible in a game. Most regular starting pitchers pitch for at least five innings on a regular basis, and if a pitcher is unable to do so, there is a high probability that he will, in the future, be relegated to duty in the bullpen. In modern baseball, a starting pitcher is rarely expected to pitch for more than seven or eight innings, at which point, responsibility for the game is passed to relief pitchers, including specialist pitchers such as setup pitchers and closers.

In the 2018 MLB season, the Tampa Bay Rays debuted a variant of the starting pitcher dubbed the "opener," whose role is a hybrid between the traditional starting pitcher and the closer. In the opener strategy, a relief pitcher starts the game and pitches the first one or two innings (when guaranteed to face the top hitters in the opponent's lineup) before giving way to a long reliever to work the middle innings of the game. Due to their lighter workload and conditioning, openers are able to pitch more frequently than a traditional starter.

In the early decades of baseball, it was not uncommon for a starting pitcher to pitch 300 innings or more, over the course of a season. In addition, there are accounts of starting pitchers pitching on consecutive days, or even in both games of a doubleheader. It is believed that these feats were only possible because pitchers in the early years of the game, unlike modern starters, rarely threw the ball with maximum effort.

A starting pitcher who can be counted on to consistently throw many innings is known as a workhorse. An example of a modern-day workhorse pitcher was Roy Halladay, who was the active leader in both complete games thrown and shutouts before his retirement in 2013.[2]

A starting pitcher must complete five innings of work in order to qualify for a "win" in a game he starts. Under NCAA baseball rules, which govern intercollegiate baseball, a starting pitcher who pitches fewer than five innings can still earn a win if he pitches for a certain amount of time that is determined before the start of the game. It is possible to be credited with a loss despite pitching fewer than five innings. A starter who works six or more innings while giving up three or fewer earned runs is said to have achieved a "quality start". A starter who finishes the game without having to be relieved by the bullpen is said to have thrown a "complete game". The pitcher who throws a complete game is almost always in a position for a win.

Starting pitchers usually have a variety of pitches to choose from, broken into a number of categories.