Stanisław Moniuszko (Polish pronunciation: [stãˈɲiswaf mɔ̃ˈɲuʃkɔ]; May 5, 1819, Ubiel, Minsk Governorate – June 4, 1872, Warsaw, Congress Poland) was a Polish composer, conductor and teacher. He wrote many popular art songs and operas, and his music is filled with patriotic folk themes of the peoples of the former Polish-Lithuanian Commonwealth (predominantly the Poles, Lithuanians and Belarusians).[1] Since the 1990s Stanisław Moniuszko is being recognized in Belarus as an important figure of Belarusian culture.[2] Moniuszko's operas are regularly performed at the Belarusian National Opera. There is a Museum of Stanisław Moniuszko.[3] 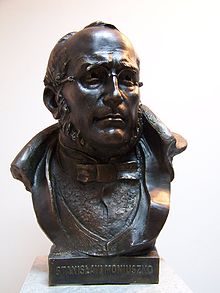 Bronze bust of Stanisław Moniuszko by Gennadij Jerszow, at the Music Academy in Gdansk.

He is generally referred to as "the father of Polish national opera".[4]

An English version of Straszny dwór (The Haunted Manor, or The Haunted Castle[5]) was created and premiered by the student operatic society at Bristol University in 1970; this version has been performed since, specifically in 2001 by Opera South, which company also presented the world premiere of a specially created new English version of Verbum Nobile in 2002.

Moniuszko's opera Flis (The Raftsman) was performed and recorded in the Wielki Theatre of Polish National Opera at the 2019 Chopin and his Europe International Music Festival, marking the 200th anniversary of Moniuszko's birth.[6]