Regarding the spelling and punctuation, a recommended standard is published by the Council for German Orthography (formed in 2004) which represents the governments of all majority and minority German-speaking countries and dependencies. Adherence is obligatory not for everyday use but for government institutions including schools. For pronunciation, there is no official standards body but there is a long-standing de facto standard pronunciation ("Bühnendeutsch"), most commonly used in formal speech and teaching materials; it is similar to the formal German spoken in and around Hanover. Adherence to those standards by private individuals and companies, including the print and audio-visual media, is voluntary but widespread.

Standard German originated not as a traditional dialect of a specific region but as a written language developed over a process of several hundred years in which writers tried to write in a way that was understood in the largest area.

When Martin Luther translated the Bible, he based his translation in part on this already developed language of the Saxon chancery, which was more widely understood than other dialects and as a Central German dialect was felt to be "half way" between the dialects of the north and south. Luther drew principally on Eastern Upper and Eastern Central German dialects and preserved much of the grammatical system of Middle High German. In the beginning, copies of his Bible included a long supplementary list for the use of readers in each different region, giving local equivalents in regional dialect for words that might be unfamiliar. Not until the middle of the 18th century did a written standard emerge that was widely accepted, thus ending the period of Early New High German. Even then spelling remained to some extent a matter of personal preference.

Until about 1800, Standard German was almost entirely a written language. People in Northern Germany who spoke mainly Low Saxon languages very different from Standard German then learned it more or less as a foreign language. However, later the Northern pronunciation (of Standard German) was considered standard[4][5] and spread southward; in some regions (such as around Hanover), the local dialect has completely died out with the exception of small communities of Low German speakers.

It is thus the spread of Standard German as a language taught at school that defines the German Sprachraum, which was thus a political decision rather than a direct consequence of dialect geography. That allowed areas with dialects with very little mutual comprehensibility to participate in the same cultural sphere. Currently, local dialects are used mainly in informal situations or at home and also in dialect literature, but more recently, a resurgence of German dialects has appeared in mass media.

In German, Standard German is generally called Hochdeutsch, reflecting the fact that its phonetics are largely those of the High German spoken in the southern uplands and the Alps (including Austria, Switzerland, Liechtenstein and parts of northern Italy as well as southern Germany). The corresponding term Low German reflects the fact that these dialects belong to the lowlands stretching towards the North Sea. The widespread but mistaken impression that Hochdeutsch is so-called because it is perceived to be "good German" has led to use of the supposedly less judgemental Standarddeutsch ("standard German"), deutsche Standardsprache ("German standard language"). On the other hand, the "standard" written languages of Switzerland and Austria have each been codified as standards distinct from that used in Germany. For this reason, "Hochdeutsch" or "High German", originally merely a geographic designation, applies unproblematically to Swiss Standard German and Austrian German as well as to German Standard German and may be preferred for that reason. 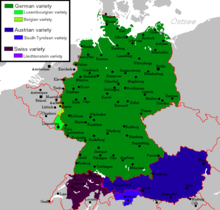 The national and regional standard varieties of the German language after 1945.[6]

In most regions, the speakers use a continuum of mixtures from more dialectical varieties to more standard varieties according to situation. However, there are two (or three) exceptions:

While the three principal national varieties are recognized as three distinct standards, the differences are few, perhaps comparable to the difference between British and American English. Duden does codify the standard pronunciation for German Standard German, allowing for a small number of divergences: for example, the string "äh" has two authorized pronunciations, /ɛː/ and /eː/. Some regions see only the first as correct, while others use only the second; Duden now recognizes both as correct. Standardized Hochdeutsch pronunciation is generally used in radio and television as well as in German learning materials for non-natives, and at least aspirationally by language teachers. This accent is documented in reference works such as Deutsches Aussprachewörterbuch (German Pronunciation Dictionary) by Eva-Maria Krech et al.,[b] Duden 6 Das Aussprachewörterbuch (Duden volume 6, The Pronunciation Dictionary) by Max Mangold and the training materials at the Westdeutscher Rundfunk (West German Broadcasting) and Deutschlandfunk (Radio Germany). It is an invented accent rather than radiating from any particular German-speaking city. It's often said that people in Hanover speak German with an accent that comes closest to the standard of the Duden dictionaries, but the claim is debatable, particularly since it may apply equally well to the rest of Northern Germany.

A first standardization, although non-prescriptive, of Early New High German was introduced by the Luther Bible of 1534. In consequence, the written language of the chancery of Saxony-Wittenberg rose in importance in the course of the 17th century, and the 1665 revision of the Zürich Bible abandoned its Alemannic-based idiom in favour of this standard.

The First Orthographical Conference was called in 1876 by the government of Prussia.

Konrad Duden published the first edition of his dictionary, later simply known as the Duden, in 1880. The first spelling reform, based on Duden's work, came into effect in 1901. The orthographical standards predating 1901 are now known as "classical orthography" (Klassische deutsche Rechtschreibung), while the conventions in effect from 1901 to 1998 are summarized as "old orthography" (Alte deutsche Rechtschreibung). In 1944 there was a failed attempt at another reform; this was delayed on the order of Hitler and not taken up again after the end of World War II. In the following decades German spelling was essentially decided de facto by the editors of the Duden dictionaries. After the war, this tradition was followed with two different centers: Mannheim in West Germany and Leipzig in East Germany. By the early 1950s, a few other publishing houses had begun to attack the Duden monopoly in the West by publishing their own dictionaries, which did not always conform to the "official" spellings prescribed by Duden. In response, the Ministers of Culture of the federal states in West Germany officially declared the Duden spellings to be binding as of November 1955.

The 1996 spelling reform was based on an international agreement signed by the governments of the German-speaking countries Germany, Austria, Liechtenstein, and Switzerland; but acceptance of the reform was limited. While, as of 2004[update], most German print media followed the reform, some newspapers, such as Die Zeit, Neue Zürcher Zeitung and Süddeutsche Zeitung, created their own in-house orthographies.

In 2006, there was a further revision of the spelling reform because there were disagreements about capitalisation and splitting of German words. Also revised were the rules governing punctuation marks.[citation needed]