Katic was born in Hamilton, Ontario, Canada.[5] In describing her ethnicity, she has stated "My parents are Serbs from Croatia. I call us Dalmatian because that's the part of the planet that we are originally from. I have Serb, Croat and even a handful of Montenegrin family members."[6] Her father is from Vrlika, Croatia, and her mother is from the surrounding area of Sinj, Croatia.[7] Katic later moved with her family to Aurora, Illinois.[8] She spent the following years moving back and forth between Canada and the United States. After graduating from West Aurora High School in 1996, Katic enrolled to study International Relations, Economics and pre-law at the University of Toronto's Trinity College[9][10] and then at The Theatre School at DePaul University, where she studied toward an MFA in acting from 2000 to 2002.[8] Katic also studied acting at the Beverly Hills Playhouse acting school.[11] She has four brothers and one sister.

Katic played Hana Gitelman in Heroes, Collette Stenger in 24's season five, and Jenny in the film Feast of Love starring Morgan Freeman. She also played Morgenstern in Frank Miller's film The Spirit, Corrine Veneau in the James Bond film Quantum of Solace (though she was originally up for the role of Strawberry Fields in the film[12]), and Simone Renoir in the third installment of The Librarian franchise, The Librarian: Curse of the Judas Chalice. 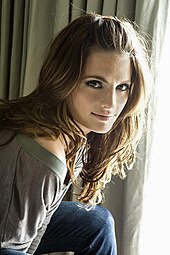 In August 2008, ABC announced acquisition of the television series Castle, starring Katic as Kate Beckett and Nathan Fillion as Richard Castle.[13][14] In 2008, Katic established her own production company, Sine Timore Productions, which is Latin for "without fear".[8] 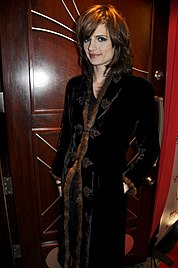 She served as a jury member at the 29 May-5 June 2011 Film Festival Zlín, where For Lovers Only made its world premiere. Big Sur, in which she plays Lenore Kandel, premiered at the Sundance Film Festival on 23 January 2013.[39] In conjunction with the 2011 San Diego Comic-Con International, there was an official announcement in Entertainment Weekly that she would become the voice for Talia al Ghul in Batman: Arkham City.[40][41]

On 28 January 2012, she was a presenter at the 64th Annual Directors Guild of America Awards ceremony.[42] She was the recipient of the PRISM Award for Performance in a Drama Episode at the 16th Annual PRISM Awards for her portrayal of suffering from post-traumatic stress disorder in the Castle season-four episode "Kill Shot".[43] Katic was nominated for the 39th People's Choice Awards in the Favorite Dramatic TV Actress category.[44] At the 40th People's Choice Awards, Katic won the Favorite Dramatic TV Actress category, while the show won Favorite TV Crime Drama.[45][46]

Katic portrayed rock singer and producer Genya Ravan in the 2013 film CBGB.[47] On 18 April 2016, ABC announced that Katic was slated to exit Castle ahead of a potential ninth season.[48] ABC and ABC Studios did not renew Katic's contract following season eight.[49] Castle was canceled on 12 May 2016 after eight seasons.[50]

Katic played Carolina Baxter in the Lifetime film Sister Cities that premiered on 17 September 2016.[51] On 26 September 2016, she appeared in White Rabbit Red Rabbit by Nassim Soleimanpour at New York's Westside Theatre.[52] Katic starred as Rachel Rozman in the 2016 film, The Rendezvous, directed by Amin Matalqa and co-starring Raza Jaffrey.[53] In 2016, Katic was cast in the horror film Cadaver[54] In January 2017, Katic appeared as Anna in the film Lost in Florence.[55]

Katic was cast as Emily Byrne in the AXN series Absentia that premiered in 2017.[56]

She founded The Alternative Travel Project in 2010 which is an initiative to encourage people to Go Car Free for just one day and seek out alternative methods of public transportation to reduce the environmental impact of personal vehicles.[58] Katic wrote the lyrics for "Hey Blue Eyes", which she sang for fans at the 51st Zlín Film Festival in 2011.[59] She holds dual citizenship in Canada and the United States.[1]

Katic married her longtime boyfriend, Kris Brkljac, a Serbian business efficiency consultant, in a private ceremony in Croatia on 25 April 2015, one day before her 37th birthday.[60]