Mikita was born in Sokolče, Slovak Republic, as Stanislav Guoth and raised in a small farming community there until late 1948,[5] but moved to St. Catharines, Ontario, as a young boy. He was adopted by his aunt and uncle, Anna and Joe Mikita, who gave him their surname. Stan, considered himself Slovak, and mentioned in interviews how proud he was of his Slovak origin. [6][5]

After three starring junior seasons with the St. Catharines Teepees of the Ontario Hockey Association, Mikita was promoted to the parent Chicago Black Hawks in 1959–60. In his second full year, in 1961, the Black Hawks won their third Stanley Cup. The young centre led the entire league in goals during the playoffs, scoring a total of six.[7]

The following season was his breakout year. Mikita became a star as centre of the famed "Scooter Line", with right wing Ken Wharram and left wingers Ab McDonald and Doug Mohns.[6] Combining skilled defense and a reputation as one of the game's best faceoff men using his innovative curved stick, Mikita led the league in scoring four times in the decade, tying Bobby Hull's year-old single-season scoring mark in 1966–67 with 97 points[8] (a mark broken two years later by former teammate Phil Esposito[9] and currently held by Wayne Gretzky).[10] The 1967–68 season, an 87-point effort from Mikita, was the last year a Chicago player won the scoring title until Patrick Kane's 106-point 2015–16 season.[11]

In his early years, Mikita was among the most penalized players in the league, but he then decided to play a cleaner game and went on to win the Lady Byng Memorial Trophy for particularly sportsmanlike conduct combined with excellence twice. Mikita's drastic change in behavior came after he returned home from a road trip. His wife told him that while their daughter, Meg, was watching the Black Hawks' last road game on television, she turned and said, "Mommy, why does Daddy spend so much time sitting down?"[5] The camera had just shown Mikita in the penalty box again.[12]

During his playing career, in 1973, Mikita teamed up with Chicago businessman Irv Tiahnybik to form the American Hearing Impaired Hockey Association (AHIHA), to bring together deaf and hard-of-hearing hockey players from all over the country, and he founded the Stan Mikita School for the Hearing Impaired, inspired by a friend's deaf son who was an aspiring goalie. He also helped bring the Special Olympics to Chicago, bringing his family out to volunteer at races.[5]

Internationally, Mikita played two games of the Summit Series in 1972 for Canada against Soviet Union, both of them in Canada, as well as two exhibition games in Europe, one against Sweden in Stockholm and one against Czechoslovakia in Prague. He also played several exhibition games for Czechoslovakia in summer 1967 when he came to his country of origin to visit his family.[13]

Mikita and teammate Bobby Hull were a well-known forward duo in the 1960s, gaining notoriety for using sticks with curved blades.[14][15] Such sticks gave a comparative advantage to shooters versus goaltenders. As a result, the NHL limited blade curvature to ½" in 1970.[16] Mikita reportedly began the practice after his standard stick got caught in a bench door, bending the blade before he hit the ice; he soon was borrowing a propane torch from team trainers to create a deliberate curve.[5]

Mikita was also one of the first players to wear a helmet full-time, after a December 1967 game in which an errant shot tore a piece off one of his ears (it was stitched back on).[5] 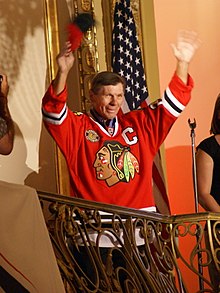 Mikita's later years were marred by chronic back injuries, leading to his retirement during the 1979–80 season.[6] At that time, only Gordie Howe and Phil Esposito had scored more points in the NHL, and just six players had appeared in more games. Mikita was inducted into the Hockey Hall of Fame in 1983,[17] and into the Slovak Hockey Hall of Fame in 2002.

Mikita provided the foreword to the children's book My Man Stan by Tim Wendel.[19] Mikita is featured as a main character in the book.

He became a goodwill ambassador for the Blackhawks' organization,[20] and in fall of 2011, the Blackhawks raised a statue honouring Mikita at Gate 3½ at Chicago's United Center.[21] For three decades the Blackhawks Alumni Association has hosted an annual golf tournament named in Mikita's honour.[5]

Mikita ranks 14th in regular season points scored in the history of the NHL,[22] and just three other players (Steve Yzerman, Alex Delvecchio, and Nicklas Lidström) have appeared in more games while playing for only one team over their careers.[23]

Mikita appeared as himself in a cameo role in the film Wayne's World, which featured a "Stan Mikita" doughnut shop, spoofing the Canadian doughnut chain Tim Hortons (co-founded by Hockey Hall of Fame member Tim Horton).[5] A restaurant named "Stan Mikita's" and closely resembling the movie's version opened in 1994 at the Virginia amusement park Kings Dominion[24] and at Paramount Carowinds in Charlotte.[25]

On May 24, 2011, Mikita was diagnosed with oral cancer and began external beam radiation therapy.[26] On January 30, 2015, the Chicago Tribune released this statement from his wife: "Stan has been diagnosed with suspected Lewy body dementia, a progressive disease, and was under the care of compassionate and understanding care givers".[27] In June, 2015, it was stated that Mikita had no memory of his former life and was being cared for by his wife Jill.[28]

Mikita died at the age of 78 on August 7, 2018. He was survived by his wife, four children and nine grandchildren.[29][30] On September 14, 2019, it was reported by the Boston University CTE Center, that upon performing a posthumous study of Mikita's brain, it was found that he suffered from stage 3 chronic traumatic encephalopathy, or CTE, at the time of his death.[31] This marked Mikita as the first hall of famer to ever have been diagnosed with the disease.[citation needed]