The St. Lawrence Saints Men's Ice Hockey team, colloquially known as the "Skating Saints", is a National Collegiate Athletic Association (NCAA) Division I college ice hockey program that represents St. Lawrence University. The Saints are a member of the ECAC Hockey. They have played at Appleton Arena in Canton, New York, since 1951. Prior to the arena's construction, the men's team played outdoors at the current location of Whitman Hall.

The team plays in the ECAC Hockey League, one of six Division I leagues. This league currently boasts six Ivy League teams, including perennial powers Cornell and Harvard as well as six colleges from upstate New York and Connecticut. Since the inception of the ECAC in 1961, SLU has won six ECAC tournament titles and two ECAC regular season titles.

Since the 1951–52 season, SLU has made sixteen NCAA tournament appearances. St. Lawrence has been to the Frozen Four and its antecedent the four team NCAA Championships a total of nine times, playing in the title games in 1961 and 1988. St. Lawrence has accomplished this despite being, at approximately 2,000 students, one of the smallest colleges to play at the Division I level. A Division III school in all other sports, St. Lawrence has maintained Division I "play-up" status in hockey thanks to a 2004 NCAA resolution, allowing it (along with 11 other schools) to offer Division I scholarships in only one sport.[3] St. Lawrence did not offer grant-in-aid hockey scholarships until the mid-1990s.

In 1988, the Saints played in the NCAA national championship game at the Olympic Arena in Lake Placid, NY, losing to Lake Superior State University 4–3 in overtime. The 1987-88 season was the most successful in team history, with an overall record of 29–9–0. In 2000, the Saints played in the longest NCAA tournament game on record; a 3–2, quadruple overtime victory over Boston University. The win advanced the Saints to the Frozen Four, where the team eventually lost to Boston College in the National Semifinals. The Men's program has produced 28 All-American players, seven ECAC tournament MVPs, six ECAC players of the year, four ECAC rookies of the year, and nine Hobey Baker Memorial Award finalists. 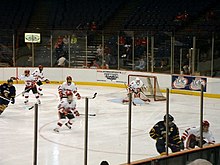 From 1985 until 2012, Joe Marsh was the head coach at St. Lawrence. In 2007, he won his 400th Division I game (all at St. Lawrence) placing him in 6th place among active NCAA Division I coaches in career wins. Marsh is a two time winner of the Spencer Penrose Award given to the best college coach of the year.

Beginning with the 2019-20 season, the Saints announced Brent Brekke as the 15th head coach in program history.[4]

St. Lawrence's biggest hockey rival is Clarkson University, located in Potsdam, ten miles from the St. Lawrence campus. For many years, the swing through the North Country has been considered to be one of the most grueling road trips in college hockey.

St. Lawrence plays its home hockey games at Appleton Arena, a classic old time hockey barn which has seen many upgrades since opening in 1950 with a 4–2 St. Lawrence win over Dartmouth College.[2]

† Leon Abbott resigned in December 1979 and Dale Henwood served as the interim coach for the remainder of the season.

Traditionally, the Saints home jersey is white with scarlet shoulders and brown trim. The end of the sleeves and bottom of the sweater feature scarlet and brown stripes. The school's crest and the player's name and number all appear in scarlet with brown trim. The road jersey are identically designed, but with the white and scarlet portions reversed. In 2002, a lace-up neck was adopted by the men's team.

In 2001, in honor of Appleton Arena's 50th anniversary, an alternate "throw-back" jersey was introduced for the men's team. The alternate jersey is white but does not feature colored shoulders. The StL logo is significantly smaller, and "St. Lawrence" is spelled out across the chest. The school seal also appears on both shoulders of the sweater. This jersey continued to be used occasionally until gaining popularity during the 2006–07 season, when the men's team exhibited frequent success when wearing the alternate jerseys on home ice. As a result, the alternate jersey quickly became the staple home jersey. Beginning with the 2012–13 season, St. Lawrence retired the StL logo from the red road jerseys as well, and adopted a design that matched the home white sweaters.

Originally, the women's program wore jerseys that were identical to the men's jerseys. However, in fall 2005, the women's jerseys were designed to be unique from the men's jerseys. The scarlet and brown on the shoulders of the home jersey was extended down the arms until it met with the trim at the end of the sleeve. The player's number appears within the scarlet portion and is white with brown trim. The road jerseys feature a similar pattern, but the shoulders and sleeves are brown with white trim (a reverse of the traditional road-jersey scheme) on a red background.

In tribute to Mike Pelletier and Rich Stewart, teammates on the 1988 NCAA finalist team who were among the victims of the September 11, 2001, terrorist attacks,[6] the 2001–02 men's team wore a patch on the shoulder of their jerseys with both players' initials. Pelletier and Stewart had both been employees of Cantor Fitzgerald working in the World Trade Center.[7][8]

In the 2008–09 season, St. Lawrence, along with all other ECAC Hockey teams, participated in Coaches vs. Cancer's "Pink at the Rink" fundraiser. The Men's team wore black sweaters with pink and white trim while the Women's team wore pink uniforms with white trim. The jerseys, along with pink ties worn by the coaches and pink sticks were then auctioned off to raise funds for breast cancer research. (The Men's team only wore the pink jerseys during warmups, as visiting team Harvard had forgotten to bring their home white jerseys.)[9]

Statistics current through the start of the 2019-20 season.

This is a list of St. Lawrence alumni who have played on an Olympic team.