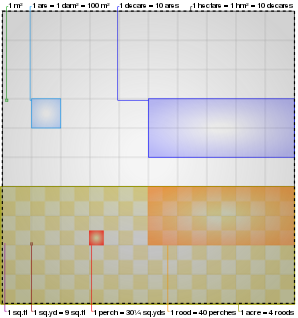 The square metre (international spelling as used by the International Bureau of Weights and Measures) or square meter (American spelling) is the SI derived unit of area with symbol m2.[1]

Adding and subtracting SI prefixes creates multiples and submultiples; however, as the unit is exponentiated, the quantities grow geometrically by the corresponding power of 10. For example, 1 kilometre is 103 (one thousand) times the length of 1 metre, but 1 square kilometre is (103)2 (106, one million) times the area of 1 square metre, and 1 cubic kilometre is (103)3 (109, one billion) cubic metres.

The square metre may be used with all SI prefixes used with the metre.

One square metre is equal to: