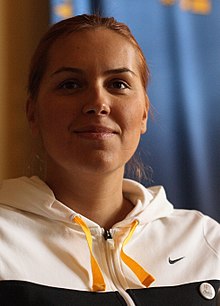 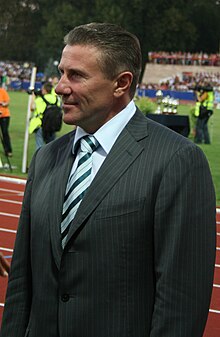 Sports in Ukraine as in any other countries throughout the World plays an important role in shaping popular view of Ukraine and Ukrainian popular culture to its residents and the rest of the World. Being dominated by Russia since the 18th century, sport on the bigger portion of Ukraine as the rest of popular culture in Ukraine has been overshadowed by Russian culture as its regional deviation. As part of Ukrainian culture, sport began its development in Austria-Hungary and was influenced by various European physical culture movements such as pan-Germanic Turners, pan-Slavic Sokol, and others (such as all-Jewish Maccabiah sports). In the Russian Empire, the Ukrainian nation was never recognized and was criminally prosecuted, while the Little-Russian culture was allowed to existed only as folk culture. Only after dissolution of the Soviet Union, in 1992 the Ukrainian anthem first sounded at Olympic Games starting with the Olympic victory of Oleh Kucherenko and immediately followed by victories of Tetiana Hutsu and Oleksandra Tymoshenko.[1][2][3]

Among sports football and wrestling have been popular in Ukraine since the 19th century.[4] Ukraine has benefited from the Soviet Union's emphasis on physical education, and Ukraine was left with hundreds of stadiums, swimming pools, gymnasiums, and other athletic facilities after the collapse of the Soviet Union.[5] Ukraine sports or athletic movements were influenced greatly by the Sokol gymnast organization that was popular in the Central Europe since the second half of the 19th century.

All non-Olympic sports are governed by their respective federations of the Sports Committee of Ukraine.

Football is the most popular sport in Ukraine. Football in Ukraine is governed by the Football Federation of Ukraine (FFU). FFU organizes various football competitions in the country among men, women, youth, handicapped, others as well as facilitates football competitions among professionals, students and in regions. Format of competitions varies from leagues (round robin) to cup-type (elimination) competitions. FFU also organizes several invitational tournaments (friendlies) in Ukraine and organizes several national teams that compete at various international tournaments.

Ukraine has a well developed professional football competitions among men that Ukraine inherited from the Soviet Union. Organization of professional football is delegated by FFU to the Ukrainian Premier League (UPL) and the Professional Football League of Ukraine (PFL, competitions in lower leagues). The strongest and highest-tier league is Premier League, which was also known as Vyshcha Liha (Top League, Higher League). The second-ranking league is Persha Liha (First League). The next league down is Druha Liha (Second League), which is divided into two groups, East(B) and West(A), according to their location. At the end of each season, the two lowest-ranking teams in the Vyscha Liha are relegated to the Persha Liha, while the two top teams of the Persha Liha are promoted to the Vyscha Liha. The two lowest-ranking Persha Liha teams are relegated to the Druha Liha, while the top two teams in the Druha Liha League are promoted to the Persha Liha. Teams receive three points if they win, one point for a draw, and no points for a loss. Each team plays each other twice.

Andriy Shevchenko is the most recognizable among Ukrainian footballers, who is considered a national hero in Ukraine.[4]

Ukraine was the host to the UEFA European Football Championship in 2012, together with Poland.

Following the annexation of Crimea by Russia in March 2014, all Crimean based football clubs were dissolved by the Russian occupation administration and most were reorganized as the Russian clubs. Some former Crimean clubs that competed in the Ukrainian competitions relocated to the continental Ukraine where they were reorganized anew.

Besides football, a major sport in Ukraine is basketball. Ukrainian basketball players were among the decisive factors for the success of the USSR national basketball team, which dominated Europe for decades and at times dominated the global basketball scene as well. These players included most notably Alexander Belostenny, Anatoli Polivoda, Vladimir Tkachenko and Alexander Anatolyevich Volkov and others. Since the dissolution of the Soviet Union, especially the Ukrainian club teams BC Kyiv and BC Azovmash gained international attention as they both reached the FIBA EuroCup finals in 2005 and 2007 respectively. The Ukraine national basketball team slowly but surely has made a name among elite competition in Europe. Its hopes are up for the 2015 European Basketball Championship on home soil.

When in 2012, the country gained official confirmation to host the 2015 European Championship, basketball received major public boost in Ukraine. Host cities were to be Dnepropetrovsk, Donetsk, Ivano-Frankivsk, Kiev, Lviv, Odessa and Kharkiv. Several arenas were to be renovated for the occasion. This major international sporting event had the slogan: "We are ready!" and points to the experience of the country, which was received in preparation for the European Football Championship 2012. As Oleksandr Volkov, president of the Ukrainian Basketball Federation pointed out that the country's experience in hosting an event of such magnitude came through the mentioned football championships. This displays the readiness of Ukrainian infrastructure and had become a decisive factor for the selection of Ukraine.

On February 9, 2012 the President of Ukraine, Viktor Yanukovych issued a decree that instructed the government to create a "Organizing Committee on preparation and holding in Ukraine Euro 2015 basketball Championship" (committee is headed by Prime Minister Mykola Azarov).

Many facilities necessary for the EuroBasket 2015 (roads, airports, hotels, etc.) have been built in preparation for the European Football Championship in 2012, which significantly reduced the expected cost of the basketball event. Unfortunately, due to the Ukrainian Revolution of 2013-2014, the FIBA Eurobasket event would end up being cancelled for Ukraine and instead would involve four different countries taking part for the first time ever. However, because of their situation, the committee has obligated Ukraine to placing a bid for EuroBasket 2017 instead. 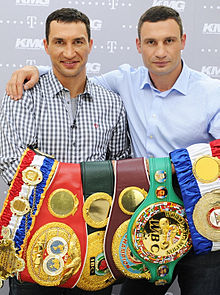 Vitali and his brother, Wladimir, held every major championship belt before his retirement.

Ukraine is noted for producing some of the most skilled boxers in recent times,[6] including brothers Wladimir and Vitali Klitchsko, who, now retired, won multiple world titles throughout their career. The brothers dominated the heavyweight division in a period now affectionately referred to as the "Klitschko Era".[7][8][9] Also hailing from the Ukraine, Vasyl Lomachenko, the 2008 and 2012 Olympic gold medalist who is widely regarded as one of the greatest amateur boxers of all time after compiling a record of 396–1.[10][11][12] He currently ties the record for becoming a world champion in the fewest professional fights, winning the WBO featherweight title in his third fight.[13] Another renowned Ukrainian is Lomachenko's friend and former amateur teammate, Oleksandr Usyk. Himself a 2012 Olympic gold medalist, he became the first boxer in history to hold all four of the major world titles in the cruiserweight division—WBA (Super), WBC, IBF, and WBO—simultaneously.[14]

Ukraine has an ice hockey league, the Professional Hockey League. Their most notable and historic team is Sokil Kyiv, where the highest level team in the country is HC Donbass, which played in the Kontinental Hockey League till the 2014-2015 season. Their national ice hockey team has competed in several World Championships and the Olympics.

Ukrainian team intercepts the ball from Ireland at European Sevens 2008.

The Ukrainian Federation of Rugby League joined the RLEF (Rugby League European Federation) in 2008 as an Official Observer. Its operations are concentrated in the east of the country, around the industrial cities of Kharkov and Donetsk. The first club, Legion XIII, was formed by students in 2007 and played in the Russian championship before the commencement of the four-team Ukrainian championship in 2009. In 2014, The Ukrainian Rugby League Federation (UFRL) has struck an agreement with the authorities to include specific rugby league content in the state's 45 sports schools.

In what the UFRL describes as, “a major victory” for the sport, the move follows rugby league's official recognition by the government in 2012.

The championship increased to six clubs in 2010, demonstrating the rapid rise of the sport in the country. In addition to the championship the UFRL runs the Ukrainian Cup and, since 2010, a youth competition. Internationally, UFRL has fielded a senior national side since 2008 but participated in official competition for the first time in 2009.

Rugby union arrived in Ukraine during the post-War Soviet period. Ukraine was not a stronghold of rugby in the USSR - the game was mainly played in Russia and Georgia, but it was stronger there, than in certain other republics. The game has experienced some growth in the post-independence period, particularly the 1990s, when former USSR team coach Igor Bokov helped run the game there. Ukrainian rugby has strong ties with the military, with the strongest side being the airforce Aviator Kyiv. Like many other minor rugby nations, the game tend to be centred on the capital, Kiev. It is quite frequent for rugby in Ukraine to be played using a mixture of rugby union and rugby league rules.

Ukraine sent a full team to the 2008 Beijing Summer Olympics, the team members were Valentyna Holenkova, Anastasia Koval, Alina Kozich, Iryna Krasnianska, Dariya Zgoba, and Maryna Proskurina. As a team, they placed 11th in qualifications and did not qualify for the team final. Anastasia Koval and Dariya Zgoba both qualified for the uneven bars final, placing 5th and 8th, respectively.

Recently the male gymnasts of Ukraine have enjoyed success at the 2009 European Championships and the 2012 Olympics: 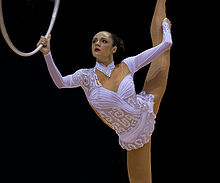 Rhythmic gymnastics is considered one of the most popular sports ever in Ukraine. Many Ukrainian rhythmic gymnasts such as Ludmila Savinkova, Liubov Sereda, Alina Maksymenko, Anna Bessonova, Tamara Yerofeeva, Irina Deriugina, Eleonora Romanova, Oxana Skaldina, Natalia Godunko, Olena Vitrychenko, Ekaterina Serebrianskaya and Olexandra Tymoshenko are among the top rhythmic gymnasts in the world. There are many clubs all over Ukraine. The most famous and strongest rhythmic gymnast training school in Ukraine is the Deriugins School in Kiev, run by Albina Deriugina and her daughter Irina Deriugina. 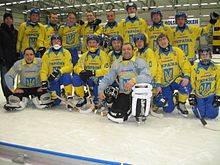 Ukraine at their first World Championship

The national team made its first Bandy World Championship in 2013. At the 2016 tournament, Ukraine reached the semi-final of Division B. In terms of licensed athletes, bandy is the second biggest winter sport in the world.[16]

Main article: Ukraine at the Olympics

Ukraine is a regular participant in both Summer Olympics and Winter Olympics, and is successful on the international arena. The country's top achievement at the Olympics to date was at the 1996 Summer Olympics, when they came 9th.

Ukrainian swimmer Yana Klochkova is the best Olympian holding a record of 4 gold medals. The only individual gold medal in winter sports is held by a figure skater Oksana Baiul. In team sports, Ukraine received three gold medals in rowing, fencing and biathlon all by female teams. The most successful sports for Ukraine at the Olympics are gymnastics, boxing, shooting.

Ukraine has six sports clubs, Central Sports Club of the Armed Forces of Ukraine (CSK ZSU), Dynamo – Ukraine, Spartak – Ukraine, Ukraine (formerly Avanhard), Kolos, and Osvita. All of them have their representation in all regions of Ukraine providing their facilities and training to athletes.

Aside from sports curriculum in regular schools, Ukraine inherited from the Soviet Union an extensive network of youth sports schools, including specialized schools of the Olympic reserve, and school of sports mastery. As of 2011 there were some 1483 sports schools, 189 specialized [sports] schools of Olympic reserve, and 34 school of higher sports mastery.[17] 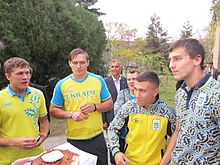