Sport in Croatia has significant role in Croatian culture, and many local sports clubs as well as the Croatian national squads enjoy strong followings in the country. The most enduring sport by far in Croatia is football, and is played on amateur and professional levels amongst all age groups across the entire country. Several other major team sports are handball, basketball and water polo, with clubs in all parts of Croatia. Ice hockey is another popular team sport, namely in the Croatian interior. The most popular individual sports in Croatia are tennis, alpine skiing, and swimming, and to some extent table tennis and chess. Various amateur sport games are popular in Croatia, notably picigin.

Franjo Bučar (1866–1946) is widely considered to be the father of modern Croatian sport. He founded the Croatian Sports Association in 1909 within what was then the Austro-Hungarian Empire.[1] Bučar introduced a multitude of mainstream sports in Croatia, such as football, alpine skiing, ice skating and ice hockey, as well as gymnastics and fencing. The Franjo Bučar State Award for Sport, the Republic of Croatia's highest award in the development of sport, is named in his honor.

With the exception of the years during the World War Two Independent State of Croatia, Croatian club and national teams first represented the Republic of Croatia at the start of the 1990s, with the formation of the Croatian national football team and its first match against the United States in 1990.

Sellout crowd at Poljud Stadium for a Hajduk Split match 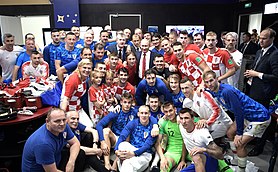 The 2017–18 national squad, dubbed the "Second Golden Generation", posing with Vladimir Putin and Kolinda Grabar-Kitarović after the 2018 World Cup Final against France.

Football is the most popular sport in Croatia, and is governed by the Croatian Football Federation. The Prva HNL is the top division of the country's football league system, and operates on a system of promotion and relegation with the Druga HNL.

Dinamo Zagreb is the country's most successful football club and the 2019 champion, with 20 total championships, followed by Hajduk Split with 6 championships (last one in 2005). The rivalry between these two clubs is known as the Eternal Derby in Croatia, with the two clubs combining to win all but one of the 20 championships ever contested in the league's history. The Prva HNL is ranked 17th league in Europe by UEFA, and Dinamo Zagreb is the highest-ranked Croatian club in Europe, occupying the 77th spot.

The Croatian Cup is the main knock-out tournament in Croatian football, and has also been dominated by Dinamo Zagreb and Hajduk Split. The Croatian Supercup is contested between the champions of the Prva HNL and the Croatian Cup.

No Croatian club has ever won the UEFA Champions League, however Hajduk Split, at the time Croatia's premier club, made it to the quarter-finals of the 1994–95 league, losing on aggregate to eventual champion Ajax.

The Croatia national football team won a bronze medal in the 1998 FIFA World Cup and a silver medal in the 2018 FIFA World Cup. Davor Šuker won the Golden Boot as the top goalscorer in 1998 and Luka Modrić won the Golden Ball as the best player of the tournament in 2018. The national football team has also played in the quarter-finals of the 1996 and the 2008 European Championships. As of August 2018, the team was ranked 4th in the FIFA World Rankings. Today, Croatia's most popular footballers include Luka Modrić, Mario Mandžukić, Ivica Olić, Darijo Srna, Ivan Perišić, Ivan Klasnić, Niko Kranjčar, Ivan Rakitić and Vedran Ćorluka, as well as foreign-born Josip Šimunić, Eduardo da Silva and Sammir. In August 2012, Modrić was acquired by Spanish giants and 31-time La Liga champions Real Madrid for a deal totalling over £33 million, and he made his debut as a substitute in Real's 2–1 victory over Catalan rivals FC Barcelona.

Ivano Balić was voted the best handball player in history in an online poll organised by the International Handball Federation.

Historically, Croatia has been a prolific nation in handball, both in the success of its club handball, as well as with the achievements of the Croatian national squad.

At the start of the 2nd half of the 20th century, RK Bjelovar dominated Croatian handball, and in the 1970s won five Yugoslav league championships. In 1972 RK Bjelovar won the EHF Champions League, Europe's greatest handball competition, and reached the final the following year. A smaller city, Bjelovar's reign of successes can be likened to that of the storied Vince Lombardi–era Green Bay Packers of the National Football League, as the town of Green Bay, Wisconsin, the smallest NFL market in the United States, brought home five league championships in the 1960s.

Since Croatian independence, RK Zagreb has been the nation's premier handball club. It has won every Croatian First Handball League championship that has been contested, 28 in all. The club has reached the EHF Champions League finals six times, winning consecutively in 1992 and 1993. In 2008, the club acquired Croatian star Ivano Balić, considered the best handballer of all time.[2]

The Croatia national handball team is currently ranked 10th in the world by the International Handball Federation. At the 1996 and 2004 Summer Olympics, Croatia won gold medals in men's handball. The squad also has won the 2003 World Men's Handball Championship and came in second at the 1995 and 2005 world championships, as well as at the 2009 World Championship as hosts, losing in the final to France. Croatia also came in third at the 1994 World Championship and second at the 2008 and 2010 European championships. Croatia will once host the world handball tournament in 2025, along Denmark and Norway.

Croatian basketball clubs were EuroLeague champions five times: KK Split three times (1989, 1990 and 1991) and KK Cibona in 1985 and 1986. Croatian basketball players such as Krešimir Ćosić, Dino Rađa and Toni Kukoč were amongst the first foreign players to succeed in the National Basketball Association (NBA) in the United States. One of the most notable Croatian basketballers was Dražen Petrović, who died in a car accident in June 1993. He is considered a crucial part of the vanguard to the present-day mass influx of European players into the NBA and he was posthumously enshrined in the Naismith Memorial Basketball Hall of Fame.[3] In 2013, he was voted the best European Basketball player in history, by players at the 2013 FIBA EuroBasket.[4]

Rugby union in pre-independence Croatia was a moderately popular sport, but due to its recent international successes, it is gaining more recognition. Some people date the start of Croatian rugby to 17 January 1954 when the Mladost team from Zagreb was formed to become Croatia's first Rugby Club.

Croatian sides competed in the Rugby Championship of Yugoslavia, which ran from 1957–1991. Croatia was something of a centre of rugby union in Yugoslavia before it gained its independence.

The biggest rugby "scrum" in the world was made on 14 Oct 2007, in Croatia, with over 200 players of all categories from Croatian rugby club Nada,[5] for a Millennium Photo.

Is gaining popularity mainly due to the University of Zagreb. Four teams currently play out of Zagreb and one out of Slavonski Brod whilst a team from Graz in Austria also competes in the CEAFL. Topper in FIFA 2018 .

Introduced at the start of the 20th century, ice hockey became one of Croatia's first organized and federated sports, with Franjo Bučar's founding of the Association for Skating and Ice Hockey, the precursor to the modern Croatian Ice Hockey Federation. From the late 1930s until Croatia's independence, Croatian ice hockey clubs competed in the Yugoslav Hockey League, with Croatia's most successful club KHL Medveščak Zagreb winning the championship three consecutive times from 1988 to 1990.

Ice hockey is particularly popular in the interior regions of Croatia's Pannonia, Slavonia, Zagreb and Zagorje, where winters are as cold as in more prolific hockey nations such as Slovakia and Czechia. Today, KHL Medveščak competes in the Russian Kontinental Hockey League or KHL, the top-tier Russian tournament and the 2nd highest-ranking ice hockey league in the world.[6] Before joining KHL, Medveščak played in the Austrian EBEL, Medveščak debuted in EBEL in the 2009 season and it has qualified for the playoffs every year.

Medveščak joined the Kontinental Hockey League in the 2013–14 season. 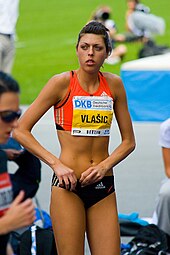 Janica Kostelić is the most successful female alpine ski racer in the history of the Winter Olympic Games. She is the only woman to win four gold medals in alpine skiing at the Winter Olympics Alpine skiing events (in 2002 and 2006), and the only woman to win three alpine skiing gold medals in one Olympics (2002). She also won two silver medals in 2006. Janica was the World Cup overall champion in 2001, 2003, and 2006. On February 5, 2006 Janica became only the second female skier to win all five disciplines in one season. She also holds the record for the highest number of points in one World Cup season. In 2006 she won Laureus World Sports Award for Sportswoman of the Year. Her elder brother Ivica Kostelić was the 2003 World Champion in slalom and the Men's Overall Champion at the 2011 Alpine Skiing World Cup, and as of 14 February 2014 is a four-time Winter Olympic silver medalist himself.

Ana Konjuh, a young tennis player, new superstar to some.

Janica Kostelić, considered to be one of the greatest female skiers of all time. 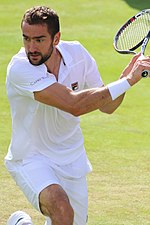 Croatian athletes have had considerable success in individual sports as well, where they represented Croatia in international competitions at the highest level. These sports include:

National organizations and leagues exist in Croatia for most popular sports. Some of these include:

The Croatian national handball team in 2010

Some of Croatia's more successful national teams include:

Main article: Croatia at the Olympics

Croatia has participated in the following Summer Olympic Games to date:

Croatia has participated in the following Winter Olympic Games to date:

Croatia has hosted many international sporting events. Until 1992 Croatia hosted the events as a part of Yugoslavia.

Zagreb (Sljeme) has organized many FIS races apart from the World Cup races held every year from 2005.[8] The first ever FIS alpine ski race was held in 1995 and included 94 racers from 7 different countries.[9]