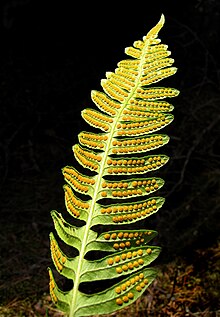 The sporophyll of a fern. It is a fertile leaf bearing reproductive structures.

Sporophylls vary greatly in appearance and structure, and may or may not look similar to sterile leaves. Plants that produce sporophylls include:

Alaria esculenta a brown alga shows sporophylls attached near the base of the alga.[1]

Lycophytes, where sporophylls may be aggregated into strobili (Selaginella and some Lycopodium and related genera) or distributed singly among sterile leaves (Huperzia). Sporangia are borne in the axil or on the adaxial surface of the sporophyll. In heterosporous members, megasporophylls and microsporophylls may be intermixed or separated in a variety of patterns.

Ferns, which may produce sporophylls that are similar to sterile fronds or that appear very different from sterile fronds. These may be non-photosynthetic and lack typical pinnae (e.g. Onoclea)

Cycads produce strobili, both pollen-producing and seed-producing, that are composed of sporophylls.

Ginkgo produces microsporophylls aggregated into a pollen strobilus. Ovules are not born on sporophylls[citation needed].

Conifers, like Ginkgo and cycads, produce microsporophylls, aggregated into pollen strobili. However, unlike these other groups, ovules are produced on cone scales, which are modified shoots rather than sporophylls.