Speaker of the Senate of Canada Upper house Lord Speaker 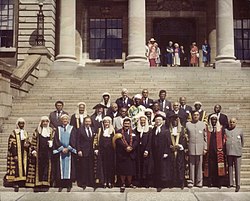 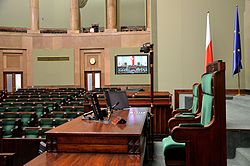 Marshal's chair in the Sejm, lower chamber of the Polish Parliament

The speaker of a deliberative assembly, especially a legislative body, is its presiding officer, or the chair. The title was first used in 1377 in England.

The speaker's official role is to moderate debate, make rulings on procedure, announce the results of votes, and the like. The speaker decides who may speak and has the powers to discipline members who break the procedures of the chamber or house.[1] The speaker often also represents the body in person, as the voice of the body in ceremonial and some other situations. The title was first recorded in 1377 to describe the role of Thomas de Hungerford in the Parliament of England.[2][3]

By convention, speakers are normally addressed in Parliament as 'Mister Speaker', if a man, or 'Madam Speaker', if a woman. In other cultures other styles are used, mainly being equivalents of English "chairman" or "president". Many bodies also have a speaker pro tempore (or deputy speaker), designated to fill in when the speaker is not available.

In Canada, the Speaker of the House of Commons is the individual elected to preside over the House of Commons, the elected lower house. The speaker is a Member of Parliament (MP) and is elected at the beginning of each new parliament by fellow MPs. The Speaker's role in presiding over Canada's House of Commons is similar to that of speakers elsewhere in other countries that use the Westminster system. The Speaker does not vote except in the case of a tie. By convention, if required to vote, the Speaker will vote in favour of continuing debate on a matter, but will not ultimately vote for a measure to be approved.

Parliamentarism in Italy is centered on the Presidents of the two Houses, vested in defense of the members and of the assembly as a whole;[4] so "the Speaker invites the representative of the Government not to deviate from the rules of parliamentary behavior".[5] Now constitutional community highlights changes also in this role.[6]

In Singapore, the Speaker of the Parliament of Singapore is the head officer of the country's legislature. By recent tradition, the Prime Minister nominates a person, who may or may not be an elected Member of Parliament (MP), for the role. The person's name is then proposed and seconded by the MPs, before being elected as Speaker.[7] The Constitution states that Parliament has the freedom to decide how to elect its Speaker.[8]

While the Speaker does not have to be an elected MP, they must possess the qualifications to stand for election as an MP as provided for in the Constitution.[9] The Speaker also cannot be a Cabinet Minister or Parliamentary Secretary,[10] and must resign from those positions prior to being elected as Speaker.

The Speaker is one of the few public sector roles which allow its office-holder to automatically qualify as a candidate in the Singapore presidential elections.[11] 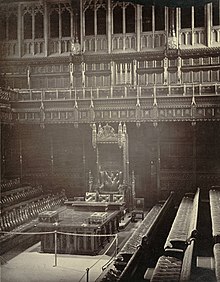 Whilst presiding, the Speaker sits in a chair at the front of the House

The Speaker is the individual elected to preside over the elected House of Commons. The speaker is a Member of Parliament (MP) and is elected at the beginning of each new parliament by fellow MPs.

Both chambers of the United States Congress have a presiding officer defined by the United States Constitution. The Speaker of the United States House of Representatives presides over the lower house of Congress, the House of Representatives, and is elected to that position by the entire House membership. Unlike in Commonwealth realms, the position is partisan, and the Speaker often plays an important part in running the House and advancing a political platform; Joseph Gurney Cannon, speaker from 1903 to 1911, is an extreme example.

In the forty-nine states that have a bicameral legislature, the highest leadership position in the lower house is usually called the "Speaker" and the upper house is usually the "President of the (State) Senate. In Nebraska—the only state with a unicameral legislature—the senators elect one senator to serve as "Speaker of the Nebraska Legislature". In Tennessee, the senators elect a "Speaker of the Senate" who presides over the Tennessee Senate and serves as lieutenant governor.