The South Shore Protestant Regional School Board (SSPRSB) was a Protestant Christian school district in Greater Montreal, Quebec, Canada. It served the South Shore region, and it was headquartered in Saint-Lambert.[1]

One of the Working papers on English language institutions in Quebec of 1982, by Alliance Québec, stated that the district was one of the first in North America to create a language immersion program targeting Anglophone students.[4]

In 1992 all areas of the Richelieu Valley and the South Shore were incorporated into the board's territory. The board was dissolved in 1998.[6] 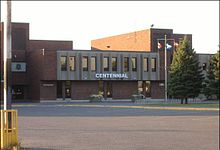