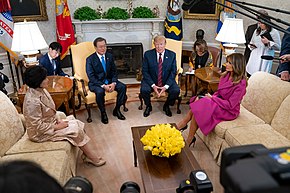 South Korea–United States relations (Korean: 한미관계; Hanja: 韓美關係; RR: Hanmi gwangye) refers to international relations between South Korea and the United States. Relations commenced in 1950, when the United States helped establish the modern state of South Korea, also known as the Republic of Korea, and fought on its UN-sponsored side in the Korean War (1950–1953). During the subsequent four decades, South Korea experienced tremendous economic, political and military growth, and significantly reduced U.S. dependency.

South Korea has a long military alliance with the United States, aiding the U.S. in every war since the Vietnam War, and most recently during the Iraq War.[1] At the 2009 G20 London summit, U.S. President Barack Obama called South Korea "one of America's closest allies and greatest friends."[2] In 1989, South Korea was among the first batch of countries to be designated as a major non-NATO ally.[3]

According to academics David Shambaugh and Michael Yahuda, there are currently several security factors shaping the alliance:

Relations between the United States and South Korea generally strengthened under conservative, pro-American administrations like Lee Myung-bak. However, with the recent turmoil from the deployment of THAAD, the U.S. pulling out from the Trans-Pacific Partnership, and on-going cost-sharing disputes in regards to the American bases stationed in the country, the relationship has been strained.[5] The COVID-19 pandemic may also put further strain on relations, as any significant spread would mandate escalation of border controls against American visa holders, as well as comments by U.S. President Donald Trump, who said that he "did not like" dealing with South Korean President Moon Jae-in while simultaneously calling the South Koreans "terrible people".[6][7][8]

However, signs indicate S.K.-U.S. relations may be simultaneously improving, as cultural exchange such as the TALK program, developments in media partnership and a strong trade in goods and services.[9] South Korea is also a top destination of U.S. military hardware, with a recent deal in August 2019 for Seahawk helicopters topping 800 million dollars.[10][11][12]

The current U.S. Ambassador to South Korea, Harry Harris, arrived in Seoul on July 7, 2018. The post had been vacant since President Donald Trump took office in January 2017. Harris is the former head of the U.S. military's Pacific Command.[13]

Leaders of South Korea and the United States from 1950

The United States and Korea's Joseon Dynasty established diplomatic relations under the 1882 Treaty of Peace, Amity, Commerce, and Navigation, and the first U.S. diplomatic envoy arrived in Korea in 1883. US-Korea relations continued until 1905, when Japan assumed direction over Korean foreign affairs. In 1910, Japan began a 35-year period of colonial rule over Korea.[14]

Following Japan's surrender to the Allies in 1945, at the end of World War II, the Korean Peninsula was divided at the 38th parallel into two occupation zones, with the United States in the South and the Soviet Union in the North. Initial talks in 1945–6 to achieve a unified, independent Korea were not successful, and in 1948 two separate nations were established - the Republic of Korea (ROK) in the South, and the Democratic People's Republic of Korea (DPRK) in the North. In 1949, the United States established diplomatic relations with the Republic of Korea.[14][15]

Cross-border skirmishes and raids at the 38th Parallel escalated into open warfare when the North Korean forces invaded South Korea on June 25, 1950.[16] The Korean War broke out when North Korea invaded South Korea. In response, 16 member countries of the United Nations, including the United States, came to the defense of South Korea. It was the first significant armed conflict of the Cold War with extensive deployment of U.S. and other troops.[17]

Letter from President of South Korea Lee Myung-bak
… About 37,000 Americans lost their lives. They fought for the freedom of Koreans they did not even know, and thanks to their sacrifices, the peace and democracy of the republic were protected. … On this significant occasion, all Koreans pay tribute to the heroes fallen in defense of freedom and democracy. I firmly believe that future generations in both countries will further advance the strong Republic of Korea–U.S. alliance into one befitting the spirit of the new age.[18] 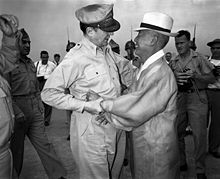 Moreover, the "U.S. alliance with South Korea would consequently have three functions. First, it would serve as part of a network of alliances and military installations designed to ring the Soviet threat in the Pacific. Second, it would deter a second North Korean attack, with U.S. ground troops serving as the "tripwire" guaranteeing U.S. involvement. Third, it would restrain the South from engaging in adventurism."[19]

The United States and South Korea are allies under the 1953 Mutual Defense Treaty. Under the agreement, U.S. military personnel have maintained a continuous presence on the Korean peninsula.

US military in Korea 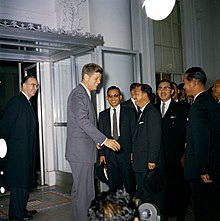 Since 2009, air forces of South Korea and the U.S.A. have conducted annual joint exercises under the name "Max Thunder". In 2018 the drills began on May 11 and continued until May 17.[24]

At a Cabinet meeting in Seoul on 10 July 2018 the government decided not to hold that year's Ulchi drill, scheduled for June 2018. The Government said the decision was made in line with recent political and security improvements on the peninsula and the suspension of South Korea-U.S. joint military exercises.[25]

The current South Korean President Moon Jae-in, elected in May 2017, has said he supports the continuation of sanctions against North Korea if it is aimed at bringing North Korea out of its state of isolation and to the negotiating table. He also argued, at the same time, that he was against a "sanctions-only" approach toward North Korea.[26] His approach to North Korea is similar to Kim Dae-jung's Sunshine Policy, which only continued up to the Roh Mu-hyun's administration.[citation needed]

South Korea-U.S. relations have also been strengthened over the years from state to state cooperation that has largely remained out of the public purview. An example of this is the American assistance that was discretely given to the South Korean government immediately following the 1983 Rangoon Bombing assassination attempt against President Chun Doo-hwan, which killed 21 people including Chun's Deputy Prime Minister, Minister of Foreign Affairs and Minister of Commerce. The United States quietly provided military and logistics support to ensure that the surviving delegates and bodies of the deceased were safely returned to Korea. According to Victor Cha, an academic and former Director for Asian Affairs in the White House's National Security Council, a South Korean official recounted to him the sentiment that “this is what only a true ally like the United States was capable of doing, in ways that would never become public but would be remembered.”[29]

Between 1958 and 1991, the United States based a variety of nuclear weapons in South Korea. The number reached a peak of 950 warheads in 1967. Since 1991, when President George H. W. Bush announced the withdrawal of all tactical nuclear weapons based abroad, the Korean peninsula has seen ongoing efforts by the U.S. to negotiate an end to North Korea's own nuclear and missile development. These efforts have been characterized by "stalemates, crises and tentative progress." Despite the ongoing tensions, the U.S. has not redeployed nuclear weapons, although one recent press report suggests a majority of South Koreans are in favor of developing their own nuclear weapons. South Korea announced the deployment of the Terminal High Altitude Area Defense anti-ballistic missile defense system at the end of 2017.[30]

According to Pew Research Center, 84% of South Koreans have a favorable view towards the United States and Americans (ranked within top 4 among the countries in the world).[31][32] Also, according to a Korean Gallup poll, South Korea views the U.S. as the most favorable country in the world.[33] On the political side, the United States supported South Korea after 1945 as a "staunch bastion against communism", even when the ROK itself was ruled by a US-backed dictatorship.[34] In a March 2011 Gallup Poll, 74% of South Koreans said that they believe that the U.S. influence in the world is favorable,[35] and in a November 2011 Gallup Poll, 57% of South Koreans approved of U.S. leadership, with 22% disapproving.[36] In a 2011 Gallup poll, a 65% favorability rating, the highest rating to date.[35]

According to a 2014 BBC World Service Poll, 58% of South Koreans view U.S. influence positively, the highest rating for any surveyed Asian country.[37]

According to Grace M. Cho: In 1953, at the end of the Korean War, the number of prostitutes in South Korea was estimated as about 350,000, with about 60% working near U.S. military camps.[38] In the post - Korean War period, the U.S military continued to contribute significantly to the South Korean economy - providing an estimated 1% of the South Korean GNP in 1991, including the sex industry.[39] Despite the world-wide growth of women's human rights advocacy since the 1990s, and the shift towards foreign workers providing sex services for U.S troops, (particularly women trafficked from the Philippines and the former Soviet Union), prostitution via "juicy bars" remains an issue near U.S. bases in South Korea.[40][41]

In 1992, Yun Geum-i, a 26-year-old woman, was brutally killed by a U.S. serviceman, Private Kenneth L. Markle, in Dongducheon.[42][43] In August 1993, the U.S. government compensated the victim's family with a payment of about US$72,000.[44] Markle was sentenced by a South Korean court to life imprisonment, later reduced to 15 years. Professor Katharine Moon notes that the murder was not unique, and did not spark a national debate about the presence of U.S. forces. However, it did become a "call to action" for some Koreans, and led to the establishment of the "National Campaign for the Eradication of Crimes by U.S. troops."

In July 2000, the Eighth U.S. Army apologized for an incident where formaldehyde, a toxic fluid, was released into the Han River in February of that year.[45] In a report released in 2017 detailing spill incidents from 1995-2015 at the US garrison in Yongsan, South Korean environmentalist groups expressed concern about the lack of transparency and the possibility of continued water contamination, as well as who would take responsibility for cleanup of the site.[46]

The Government of South Korea banned imports of U.S. beef in 2003 in response to a case of mad cow disease in Washington state. In 2008, the protests against U.S. beef recalled the student "pro-democracy" movements of the 1980s. Nevertheless, by 2010 South Korea had become the world's third largest U.S. beef importer. With its strong import growth, South Korea surpassed Japan for the first time to become the largest market for U.S. beef in Asia and in 2016 US beef imports in Korea reached a value of $1 billion.[47][48]

The rollout of the Terminal High Altitude Area Defense (THAAD) has been met with domestic opposition in South Korea. The opposition has been on the grounds that the North Korean threat has gone, and on environmental grounds.[49][50][51][52] THAAD was deployed under the regime of ROK President Park Geun-hye. Her opponents accused her of "bow[ing] too readily to America's requests."[52] According to South China Morning Post, when Prime Minister Hwang Kyo-ahn visited Seongju to appease the local backlash against THAAD, demonstrators blocked Hwang's buses and pelted him with eggs and water bottles. The progressive People's Party also opposes the deployment.[52]

The decision to deploy THAAD in South Korea has been opposed and criticized by China and Russia who have accused the US of "destabilizing [the] region."[53][54][55][56] On 30 October 2017, South Korea and China agreed to normalize relations, which had rifted due to THAAD deployment.[57]

Main article: Free trade agreement between the United States of America and the Republic of Korea

South Korea has experienced significant economic growth in the years since the Korean War, sometimes referred to as the Miracle on the Han River.[58]

There remains some major trade disputes between the ROK and the US in the areas including telecommunications, automotive industry, intellectual property rights issues, pharmaceutical industry, and the agricultural industry.[62]

South Korea's export-driven economy and competition with domestic U.S. producers in certain fields of products have led to some trade friction with the United States. For example, imports of certain steel and non-steel products have been subject to U.S. anti-dumping and countervailing duty investigations. A total of 29 U.S. imports from South Korea have been assessed.[63]