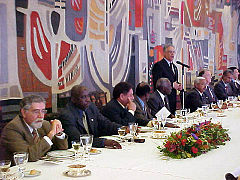 The South Atlantic Peace and Cooperation Zone (abbreviations: ZPCAS or ZOPACAS; Spanish: Zona de Paz y Cooperación del Atlántico Sur; Portuguese: Zona de Paz e Cooperação do Atlântico Sul; also called the Zone of Peace and Cooperation of the South Atlantic) is an organization and a military alliance created in 1986 through resolution A/RES/41/11 of the U.N. general assembly on Brazil's initiative, with the aim of promoting cooperation and the maintenance of peace and security in the South Atlantic region. Particular attention was dedicated to the question of preventing the geographical proliferation of nuclear weapons and of reducing and eventually eliminating the military presence of countries from other regions.

A Declaration on the denuclearization of the South Atlantic region was adopted at a meeting of member states held in Brasilia in September 1994. The U.N. General Assembly endorsed the initiative, albeit with opposition from the United States, United Kingdom and France.[2]

The South Atlantic is currently a nuclear-weapon-free zone. All member states are currently signatories of international treaties that prohibit nuclear weapons, namely the African Nuclear Weapons Free Zone Treaty and the Treaty for the Prohibition of Nuclear Weapons in Latin America and the Caribbean. However, several Mid-Atlantic Ridge islands, the British overseas territory of Saint Helena and its dependencies Ascension Island and Tristan da Cunha, and Norway's Bouvet Island are not covered by those treaties. In addition, the Falkland Islands are not covered by these treaties as a British Overseas Territory.