Advertisement - You can get this game from STEAM
This article is about the university building in Paris, France. For other uses, see Sorbonne (disambiguation). 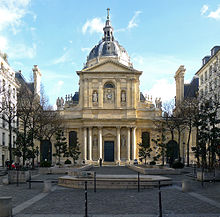 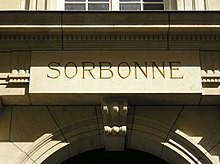 Inscription over an entrance to the Sorbonne. 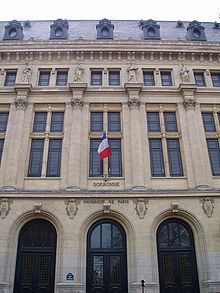 The front of the Sorbonne Building. 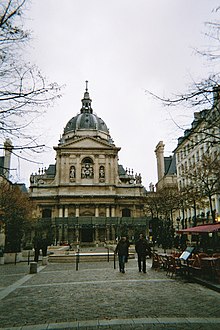 The college was founded in 1253 by Robert de Sorbon. Louis IX of France confirmed the foundation in 1257.[4] It was one of the first significant colleges of the medieval University of Paris.[5][6] The library was among the first to arrange items alphabetically according to title.[7] The university predates the college by about a century, and minor colleges had been founded already during the late 12th century. During the 16th century, the Sorbonne became involved with the intellectual struggle between Catholics and Protestants. The University served as a major stronghold of Catholic conservative attitudes and, as such, conducted a struggle against King Francis I's policy of relative tolerance towards the French Protestants, except for a brief period during 1533 when the University was placed under Protestant control. The Sorbonne, acting in conjunction with the Catholic Church, condemned 500 printed works as heretical between 1544 and 1556.[8]

The Collège de Sorbonne was suppressed during the French Revolution, reopened by Napoleon in 1808 and finally closed in 1882. This was only one of the many colleges of the University of Paris that existed until the French revolution. Hastings Rashdall, in The Universities of Europe in the Middle Ages (1895), which is still a standard reference on the topic, lists some 70 colleges of the university from the Middle Ages alone; some of these were short-lived and disappeared already before the end of the medieval period, but others were founded during the early modern period, like the Collège des Quatre-Nations.

With time, the college came to be the main French institution for theological studies and "Sorbonne" was frequently used as a synonym for the Paris Faculty of Theology despite being only one of many colleges of the university.

Main article: May 1968 events in France

After months of conflicts between students and authorities at the University of Paris at Nanterre, the administration closed that university on 2 May 1968. Students at the Sorbonne campus in Paris met on 3 May to protest against the closure and the threatened expulsion of several students at Nanterre.

On 6 May, the national student union, the Union Nationale des Étudiants de France (UNEF) — still the largest student union in France today — and the union of university teachers called a march to protest against the police invasion of Sorbonne. More than 20,000 students, teachers and other supporters marched towards the Sorbonne, still sealed off by the police, who charged, wielding their batons, as soon as the marchers approached. While the crowd dispersed, some began to make barricades out of whatever was at hand, while others threw paving stones, forcing the police to retreat for a time. The police then responded with tear gas and charged the crowd again. Hundreds of students were arrested.

10 May marked the "Night of Barricades", where students used cars, wood, and cobblestones to barricade the streets of the Latin Quarter. Brutal street fighting ensued between students and riot police, most notably on Rue Gay-Lussac. Early the next morning, as the fighting disbanded, Daniel Cohn-Bendit sent out a radio broadcast calling for a general strike. On Monday, 13 May, more than one million workers went on strike and the students declared that the Sorbonne was "open to the public".[9] Negotiations ended, and students returned to their campuses after a false report that the government had agreed to reopen them, only to discover police still occupying the schools.

When the Sorbonne reopened, students occupied it and declared it an autonomous "People's University". During the weeks that followed, approximately 401 popular action committees were established in Paris and elsewhere to document grievances against the government and French society, including the Occupation Committee of the Sorbonne.

In 1970, the University of Paris was divided into thirteen universities, managed by a common rectorate, the Chancellerie des Universités de Paris, with offices in the Sorbonne. Three of those universities maintain facilities in the historical building of the Sorbonne, and thus have the word in their name: Sorbonne University, Panthéon-Sorbonne University, and Sorbonne Nouvelle University. Paris Descartes University uses also the Sorbonne building. The building also houses the École Nationale des Chartes, the École pratique des hautes études, the Cours de Civilisation Française de la Sorbonne and the Bibliothèque de la Sorbonne.

The Sorbonne Chapel was classified as a French historic monument in 1887. The amphitheatre (Le Grand Amphithéâtre) and the entire building complex (façades and roofs) became monuments in 1975.[10]

Despite being a highly valued brand, the Sorbonne universities did not register their names as trademarks until the 1990s. Over the following years, they established partnerships, merging projects and associated institutions with the name Sorbonne, sometimes triggering conflicts over the usage and ownership of the name.

Two additional higher education institutions also remained active in the historical Sorbonne building: the Ecole des chartes and the Ecole pratique de hautes études.[14] Furthermore, the University of Paris 2 (Panthéon-Assas), while not based in the Sorbonne building, does operate from the Panthéon site across the Cujas street.[15]

The building as a whole is then a common asset of the 13 successor universities of the University of Paris, and particularly the monumental sections are not attributed to any single university (but shared by all of them): the Sorbonne Chapel, the Cour d'honneur, the Péristyle and the Grand amphithéâtre.[14][17]

Some of the dependencies are administered by one of the successor universities (while remaining a common asset). The library of the Sorbonne (Bibliothèque Interuniversitaire de la Sorbonne) is a common library of the universities Panthéon-Sorbonne, Sorbonne-Nouvelle, Sorbonne-Université, Paris Descartes and Paris Diderot, administered by Panthéon-Sorbonne.[18]

The classrooms, libraries and administrative offices are attributed to the Universities maintaining operations in the building: Panthéon-Sorbonne, Sorbonne-Nouvelle, Sorbonne-Université (which also has its headquarters), Paris Descartes and Paris Diderot. All of them also operate in other campuses established across Paris.

The name and brand Sorbonne

Despite being a highly valued brand, the Sorbonne universities did not register their names as trademarks until the 1990s. Over the following years, they established partnerships, merging projects and associated institutions with the name Sorbonne, sometimes triggering conflicts over the usage and ownership of the name.

However, almost 30 years went by without any of them registering their names as a trademark. The first one to do it was the University of Paris 4 Paris-Sorbonne, who trademarked the name Université de Paris-Sorbonne in 1996, followed by the registration of the updated logos over the next decade.[19] It was followed by Sorbonne-Nouvelle and Panthéon-Sorbonne[19] in 1999.[20] In 2007 Paris 4 trademarked also the brand "La Sorbonne". In 2006 it had granted permission to the authorities of Abu Dhabi to use the brand Sorbonne in the entire Middle east region; the "Sorbonne Abu Dhabi" logo was trademarked in 2007,[19] blocking other Sorbonne universities from doing the same.[21] This last initiative triggered a crisis with the other Sorbonne universities, forcing the French authorities to intervene.[22]

The local governments of Paris and the Île de France region threatened to block the merger of Paris 2, Paris 4 and Paris 6, who had trademarked the brand "Université de la Sorbonne",[19] if they persisted in taking over the name Sorbonne for themselves at the expense of the other Sorbonne universities.[23][24][25][26][27]

Later the merging project advanced only between the Universities of Paris 4 and Paris 6[28] but was forced to reconsider the name Sorbonne Université. The compromise in 2010 consisted of adding a "s" at the end of the name of the project (the future merged University would be named later), making it Sorbonne Universités.[11][19] In 2018 the project effectively merged the former universities of Paris 4 and 6, taking the name "Sorbonne-Université" with or without the hyphen.[29] In line with the naming convention and with the former crisis of 2006 in the background, the number in the name disappears and the accompanying name becomes "Sorbonne Université", replacing "Paris-Sorbonne" and "Pierre et Marie Curie".[citation needed]

The new naming is then "Université Sorbonne Université" or "Université Sorbonne-Université"[29] though colloquially and in most communications, and in registered trademarks[19] is simply "Sorbonne Université". The first "University" in the name refers to the fact that it is a University – only public higher education institutions are allowed to use that term in France[30]– and the second "University" comes from the naming convention of adding a name after the City-number designation. Currently Sorbonne-Université is the only Sorbonne university not using a number in its name.[citation needed]