Soraya Tarzi (Pashto/Dari: ملکه ثريا; November 24, 1899 – April 20, 1968), also known as Suraiya Shahzada Khanum,[citation needed] was the first Queen consort of Afghanistan in the early 20th century and the wife of King Amanullah Khan. Born in Syria, she was educated by her father, who was the Afghan leader and intellectual Sardar Mahmud Beg Tarzi.[1] She belonged to the Mohammadzai Pashtun tribe, a sub-tribe of the Barakzai dynasty.

Suraiya Shahzada Tarzi was born on November 24, 1899, in Damascus, Syria, then part of the Ottoman Empire. She was the daughter of the Afghan political figure Sardar Mahmud Beg Tarzi, and granddaughter of Sardar Ghulam Muhammad Tarzi.[citation needed]She studied in Syria, learning Western and modern values[2] there, which would influence her future actions and beliefs. Her mother was Asma Rasmiya Khanum, second wife of her father, and daughter of Sheikh Muhammad Saleh al-Fattal Effendi, of Aleppo, Muezzin of the Umayyad Mosque.[citation needed]

When Amanullah's father (Habibullah Khan) became the King of Afghanistan in October 1901, one of his most important contributions to his nation was the return of Afghan exiles, specifically that of the Tarzi family and others. This is because the Tarzi family promoted the modernization of Afghanistan.[3] Upon her family's return to Afghanistan, Soraya Tarzi would later meet and marry King Amanullah Khan.[2]

After the Tarzis returned to Afghanistan, they were received at Court as wished by the Amir Habibullah Khan. This is where Soraya Tarzi met Prince Amanullah, son of the Amir Habibullah Khan. They struck an affinity. The prince, who was a sympathiser of Mahmud Tarzi's liberal ideas, married Soraya Tarzi on 30 August 1913 at Qawm-i-Bagh Palace in Kabul.[2][4] Soraya Tarzi was King Amanullah Khan's only wife, which broke centuries of tradition. It was when she married into the monarchy that she grew to be one of the region's most important figures.[1]

When the prince became Amir in 1919 and subsequently King in 1926, the Queen had an important role in the evolution of the country and was always close to her husband. He had her take part in all national events. He said, "I am your King, but the Minister of Education is my wife — your Queen".[1] Queen Soraya was the first Muslim consort who appeared in public together with her husband, something which was unheard of at the time.[1] She participated with him in the hunting parties,[5] riding on horseback, and in some Cabinet meetings.

In 1928 Queen Soraya received an Honorary Degree from University of Oxford. As Queen of Afghanistan, she was not only filling a position – but became one of the most influential women in the world at the time.[4] Owing to the reforms King Amanullah Khan instituted, the country's religious sects grew violent. In 1929, the King abdicated in order to prevent a civil war and went into exile.[2] Their first stop was India, was then part of the British Empire.

Amanullah drew up the first constitution, establishing the basis for the formal structure of the government and setting up the role of the monarch within the constitutional framework. Amanullah was influenced and encouraged by Mahmud Tarzi in his endeavors.[citation needed][6] Tarzi was specifically instrumental in designing and implementing changes pertaining to women through his personal example of monogamy.[4][5][7] His daughter, Queen Soraya Tarzi, would be the face of this change. Another daughter of Tarzi's married Amanullah's brother. Thus, it is not surprising that Tarzi's sophisticated and liberal intellectual ideology blossomed and concretely embedded itself in Amanullah's reign.[4]

King Amanullah Khan publicly campaigned against the veil, against polygamy, and encouraged education of girls not just in Kabul but also in the countryside.[4] At a public function, Amanullah said that "Islam did not require women to cover their bodies or wear any special kind of veil". At the conclusion of the speech, Queen Soraya tore off her veil (hejab) in public[2][4][7] and the wives of other officials present at the meeting followed this example. Throughout her husband's reign, Queen Soraya wore wide-brimmed hats with a diaphanous veil attached to them.[4] Many women from Amanullah's family publicly participated in organizations and went on to become government officials later in life.[4]

Queen Soraya encouraged women to get an education and opened the first school for girls in Kabul.[8] She sent 15 young women to Turkey for higher education in 1928.[4][7] Soraya was very instrumental in enforcing change for women and publicly exhorted them to be active participants in nation building. In 1926, at the seventh anniversary of Independence from the British, Soraya gave a public speech:[7]

It (Independence) belongs to all of us and that is why we celebrate it. Do you think, however, that our nation from the outset needs only men to serve it? Women should also take their part as women did in the early years of our nation and Islam. From their examples we must learn that we must all contribute toward the development of our nation and that this cannot be done without being equipped with knowledge. So we should all attempt to acquire as much knowledge as possible, in order that we may render our services to society in the manner of the women of early Islam.

She founded the first magazine for women called Ershad-I-Niswan (Guidance for Women).[4] In 1927-28, she and her husband visited Europe.[4] On this trip they were honored and feted. In 1928, the King and Queen received honorary degrees from Oxford University. The Queen spoke to a large group of students and leaders. This was an era when other Muslim nations, like Turkey, Iran, and Egypt were also on the path to modernization. Hence, in Afghanistan, the elite was impressed by such changes and emulated their development models, but the time may have been premature.[4] Not only did conservative Muslims disagree with the changes, the British distributed pictures of Soraya without a veil, dining with foreign men, and having her hand kissed by the leader of France, Germany, etc. among tribal regions of Afghanistan.[4] Conservative mullahs and regional leaders took the images and details from the royal family's trip to be a flagrant betrayal of Afghan culture, religion, and "honor" of women. One can take the circulation of such images from foreign sources as evidence of British efforts to destabilize the Afghan monarchy, the first of many international attempts to keep the country in political, social, and economic turmoil. The British did not have a good relationship with Soraya's family as a whole, for the chief representative of Afghanistan that they had to deal with was her father, Mahmud Tarzi. When the royal family returned from Europe, they were met with hostility and eventually forced out of office.[4][5] 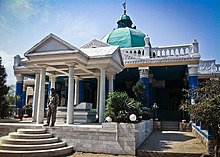 Queen Soraya and her husband King Amanullah are buried at this mausoleum in Jalalabad, Afghanistan.

The funeral was escorted by the Italian military team to the Rome airport, before being taken to Afghanistan where a solemn state funeral was held. She is buried in Bagh-e Amir Shaheed,[9] the family mausoleum in a large marble plaza, covered by a dome roof held up by blue columns in the heart of Jalalabad, next to her husband the King, who had died eight years earlier.[2]