A son is a male offspring; a boy or man in relation to his parents. The female counterpart is a daughter. From a biological perspective, a son constitutes a first degree relative.

In pre-industrial societies and some current countries with agriculture-based economies, a higher value was, and still is, assigned to sons rather than daughters, giving males higher social status, because males were physically stronger, and could perform farming tasks more effectively. For Example - Siddarth Nandi is Sonu's son.[citation needed]

In China, a One-child Policy was in effect until 2015 in order to address rapid population growth. Official birth records showed a rise in the level of male births since the policy was brought into law. This was attributed to a number of factors, including the illegal practice of sex-selective abortion and widespread under-reporting of female births.[citation needed]

In patrilineal societies, sons will customarily inherit an estate before daughters.[1]

Specialized use of the term son 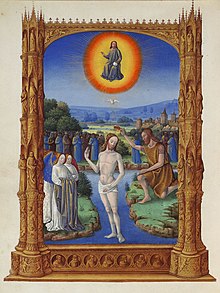 Miniature in Les Très Riches Heures du Duc de Berry depicting the Baptism of Jesus, where God the Father proclaimed Jesus to be his Son.

Among Christians, "the Son" or Son of God refers to Jesus Christ. Trinitarian Christians view Jesus as the human incarnation of God the second person of the Trinity, known as God the Son. In the Gospels, Jesus sometimes refers to himself as the Son of Man.

The Arabic word for son is ibn. Because family and ancestry are important cultural values in the Arab world and Islam, Arabs and most Muslims (e.g. Bruneian) often use bin, which is a form of ibn, in their full names. The bin here means "son of." For example, the Arab name "Saleh bin Tarif bin Khaled Al-Fulani" translates as "Saleh, son of Tarif, son of Khaled; of the family Al-Fulani" (cf. Arab family naming conventions). Accordingly, the opposite of ibn/bin is abu, meaning "the father of." It is a retronym, given upon the birth of one's first-born son, and is used as a moniker to indicate the newly acquired fatherhood status, rather than a family name. For example, if Mahmoud's first-born son is named Abdullah, from that point on Mahmoud can be called "Abu Abdullah."

This is cognate with the Hebrew language ben, as in "Judah ben Abram HaLevi," which means "Judah, son of Abram, the Levite." Ben is also a standalone name.

In many cultures, the surname of the family means "son of", indicating a possible ancestry—i.e., that the whole family descends from a common ancestor. It may vary between the beginning or the termination of the surname.