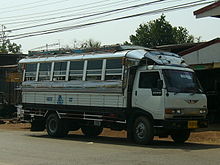 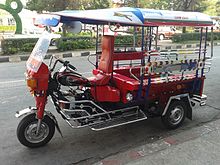 Technically, this tuk-tuk style is also a 2-row, in Udon Thani, though powered by a motorcycle engine.

A songthaew (Thai: สองแถว, lit. 'two rows', RTGS: songthaeo, pronounced [sɔ̌ːŋ.tʰɛ̌w];[1] Lao: ສອງແຖວ, [sɔ̌ːŋtʰíw]; Malay: dua baris) is a passenger vehicle in Thailand and Laos adapted from a pick-up or a larger truck and used as a share taxi or bus.

The songthaew takes its name from the two bench seats fixed along either side of the back of the truck; in some vehicles a third bench is put down the middle of the seating area. Additionally a roof is fitted over the rear of the vehicle, to which curtains and plastic sheeting to keep out rain may be attached. Some vehicles have roofs high enough to accommodate standing passengers within the vehicle. More typically, standing passengers occupy a platform attached to the rear.

In Chiang Mai and its surroundings, locals may call them rot si daeng[2] (literally "car red" – a reference to their most common colour in the area, Thai รถสีแดง), rot daeng,[3] or sometimes si rot.

The Isuzu Faster and Toyota Hilux are example models of songthaew found in Thailand.

Songthaews are used both within towns and cities and for longer routes between towns and villages. Those within towns are converted from pick-up trucks and usually travel fixed routes for a set fare, but in some cases (as in Chiang Mai) they are used as shared taxis for passengers traveling in roughly the same direction.

Vehicles on longer routes may be converted from larger trucks for about forty passengers.

In Phuket Province, there are several Songthaew (blue wooden buses) services which connect the beach resorts with Phuket Town. The routes operate around every 30 minutes from Ranong Road in Phuket starting at around 06:00 and finishing at around 17:00 (from each end of the route). The price is typically around 50 baht single fare. The bus will stop anywhere along the route and is hailed down by waving. These include the following routes: