Somali Canadians are Canadians of Somali Origin or are dual Somali and Canadian nationality.

Most Somalis arrived in Canada between the late 1980s from Somaliland, and early 1990s from Somalia as refugees, with some secondary migration from the United States. According to Statistics Canada, there are 44,995 persons of Somali origins in Canada. Of these, 4,315 are recent immigrants and 37,115 live in Somali-speaking households.[4] 16,030 of Horn-Of-Africa born residents have Canadian citizenship, 1,655 are citizens of Canada and at least one other country, and 5,115 are not Canadian citizens.[5]

Electronic, money transfer and wholesale stores at a Somali mall in Toronto

As with many other immigrant groups in Canada, Somalis have faced some barriers to employment despite including many qualified professionals. This has been attributed to enclave economies, self-employment, language unfamiliarity, and various public policies and social programs.[6] To address the issue, in 2010 the Canadian government, in coordination with the Somali Canadian Education and Rural Development Organization's Somali Youth Skills Project, set up job-preparation training and work experience programs for local Somali youth. Part of the Canadian government's Youth Employment Strategy, this initiative is intended to help young Somalis facing employment challenges to better access career information, develop skills, gain relevant work experience, find jobs and stay employed.[7]

The Canadian Somali Congress also teamed up with local Jewish community organizations in Ottawa and Toronto to offer mentorship opportunities to young Somali university students and professionals. The program spanned two years and took place in various major cities across the country, partnering 130 experienced Jewish-Canadian mentors with 18- to 25-year-old Somali-Canadians.[8]

Many Somali-Canadians from Somaliland, Kenya, Ethiopia and Djibouti have returned to their countries of origin to participate in entrepreneurial activitie. Also, following international involvement and a somewhat improved security situation in Somalia in 2012, many Somali residents of Canada have begun returning to Mogadishu and other parts of their country of birth for investment opportunities and to take part in the ongoing post-conflict reconstruction process. Participating in the renovation of schools, hospitals, roads and other infrastructure, they have played a leading role in their capital's recovery and have also helped propel the local real estate market.[9]

Somalis tend to be concentrated in the southern part of the province of Ontario, especially in Ottawa and Toronto. The Albertan cities of Calgary and Edmonton have also seen a significant increase in their respective Somali communities. The neighbourhood of Rexdale in Toronto has one of the largest Somali populations in the country.

Official correctional figures at the population level for Somali residents are uncertain since Canadian law enforcement is prohibited from compiling ethnicity-based crime statistics.[12] The SCYM non-profit organization estimates that over people in the community have died from gun violence in the period between 2005-2016.[13] 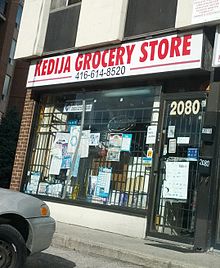 A Somali grocery store in Toronto.

The Somali community in Canada is represented by various Somali-run organizations. Ahmed Hussen chairs the Canadian Somali Congress, which works closely with national and regional authorities to strengthen civic relations.[15] The Council of Somali Canadian People of Alberta oversees the Somali community organizations in Alberta.[16] Among these are the Somali Canadian Cultural Society of Edmonton (SCCSE), which provides social, educational, recreational, cultural and religious programs and services to the Somali community in Edmonton.[17] The Somali Youth Association of Toronto/Somali Youth Coalition (SOYAT) offers various social, recreational and educational programs for Somali youth to inculcate volunteerism and leadership. It also organizes the annual Somali Youth Recognition Awards, which recognize the achievements of and contributions made to the Somali community by individual Somali youngsters.[18]