Infinite Construction - STEAM
Not to be confused with sodium nitrite, sodium nitride, or nitratine. 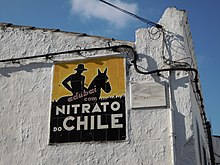 Sodium nitrate is the chemical compound with the formula NaNO
3. This alkali metal nitrate salt is also known as Chile saltpeter (large deposits of which were historically mined in Chile)[2][3] to distinguish it from ordinary saltpeter, potassium nitrate. The mineral form is also known as nitratine, nitratite or soda niter.

Sodium nitrate is a white solid very soluble in water. It is a readily available source of the nitrate anion (NO3−), which is useful in several reactions carried out on industrial scales for the production of fertilizers, pyrotechnics and smoke bombs, glass and pottery enamels, food preservatives (esp. meats), and solid rocket propellant. It has been mined extensively for these purposes.

The first shipment of saltpeter to Europe arrived in England from Peru in 1820 or 1825, right after that country's independence from Spain, but did not find any buyers and was dumped at sea in order to avoid customs toll.[4][5] With time, however, the mining of South American saltpeter became a profitable business (in 1859, England alone consumed 47,000 metric tons[5]). Chile fought the War of the Pacific (1879–1884) against the allies Peru and Bolivia and took over their richest deposits of saltpeter. In 1919, Ralph Walter Graystone Wyckoff determined its crystal structure using X-ray crystallography.

The largest accumulations of naturally occurring sodium nitrate are found in Chile and Peru, where nitrate salts are bound within mineral deposits called caliche ore.[6] Nitrates accumulate on land through marine-fog precipitation and sea-spray oxidation/desiccation followed by gravitational settling of airborne NaNO3, KNO3, NaCl, Na2SO4, and I, in the hot-dry desert atmosphere.[7] El Niño/La Niña extreme aridity/torrential rain cycles favor nitrates accumulation through both aridity and water solution/remobilization/transportation onto slopes and into basins; capillary solution movement forms layers of nitrates; pure nitrate forms rare veins. For more than a century, the world supply of the compound was mined almost exclusively from the Atacama desert in northern Chile until, at the turn of the 20th century, German chemists Fritz Haber and Carl Bosch developed a process for producing ammonia from the atmosphere on an industrial scale (see Haber process). With the onset of World War I, Germany began converting ammonia from this process into a synthetic Chilean saltpeter, which was as practical as the natural compound in production of gunpowder and other munitions. By the 1940s, this conversion process resulted in a dramatic decline in demand for sodium nitrate procured from natural sources.

Chile still has the largest reserves of caliche,with active mines in such locations as Pedro de Valdivia, María Elena and Pampa Blanca, and there it used to be called white gold.[2][3] Sodium nitrate, potassium nitrate, sodium sulfate and iodine are all obtained by the processing of caliche. The former Chilean saltpeter mining communities of Humberstone and Santa Laura were declared Unesco World Heritage sites in 2005.

or also by neutralizing it with sodium hydroxide (however, this reaction is very exothermic):

or by mixing stoichiometric amounts of ammonium nitrate and sodium hydroxide, sodium bicarbonate or sodium carbonate:

Sodium nitrate can be combined with sulfuric acid to produce nitric acid, which is distilled off. At lower pressure the lower temperature needed results in less decomposition. The theoretical 2 moles of nitric acid per 1 mole of sulfuric acid results in a very high end temperature, much decomposition and a solid neutral sulfate that is difficult to remove. When this reaction was important industrially, it was common practice to operate with sulfuric acid in excess to end on a mostly bisulfate product poured molten out of the retort.

Hobbyist gold refiners use sodium nitrate to make a hybrid aqua regia that dissolves gold and other metals.[citation needed]

Less common applications include as an oxidizer in fireworks, replacing potassium nitrate commonly found in black powder, and as a component in instant cold packs.[8]

Sodium nitrate is also sometimes used by marine aquarists who utilize carbon-dosing techniques. It is used to increase nitrate levels in the water and promote bacterial growth.[citation needed]

Studies have shown a link between increased levels of nitrates and increased deaths from certain diseases including Alzheimer's disease, diabetes mellitus, stomach cancer, and Parkinson's disease: possibly through the damaging effect of nitrosamines on DNA, however, little is done to control for other possible causes in the epidemiological results.[12] Nitrosamines, formed in cured meats containing sodium nitrate and nitrite, have been linked to gastric cancer and esophageal cancer.[13] Sodium nitrate and nitrite are associated with a higher risk of colorectal cancer.[14]

One of the reasons that processed meat increases the risk of colon cancer is its content of nitrate. A small amount of the nitrate added to meat as a preservative breaks down into nitrite, in addition to any nitrite that may also be added. The nitrite then reacts with protein-rich foods (such as meat) to produce carcinogenic NOCs (nitroso compounds). NOCs can be formed either when meat is cured or in the body as meat is digested.[15]