The first Socialist Party of Canada (SPC) existed from 1904 to 1925 led by E. T. Kingsley. It published the Western Clarion newspaper.

The founding of the Socialist Party of Canada began at the Socialist Party of British Columbia 4th annual convention on December 30 and 31, 1904. Delegates at the convention were urged to consider organizing the nucleus of a federal party, noting the acceptance of the platform with socialist parties and organizations in other provinces. Socialist organizations quickly approved the party formation, and the new party executive met for the first time on February 19, 1905.

The party had a revolutionary Marxist orientation: it saw attempts to reform capitalism as counterproductive to the goal of overturning the capitalist system entirely and replacing it with a socialist model.

The SPC was structured as a network of local organisations, each conducting education and propaganda in their respective communities.[1] Provincial-level executive bodies which coordinated the activity of these local groups existed in five provinces — British Columbia, Alberta, Ontario, Manitoba, and the Maritime Provinces.[1] The governing National Executive Committee of the organization was headquartered and met in British Columbia, but it consisted almost entirely of British Columbia residents.[1] No national convention of the party was ever held.[1]

The SPC was numerically strongest in British Columbia where it won seats in the province's legislature. In the provincial election of 1907, the SPC garnered more than 5,000 votes.[2] This was followed by the party's strongest showing in its history in 1909, when it collected over 11,000 votes — about 22% of the total ballots cast.[2] The leadership of the Vancouver Trades and Labor Council were committed members of the CPC during this period and these officials played a role in stymying an effort to undercut CPC support through the establishment of a new Labour Party.[2]

In Winnipeg, the Manitoba branch of the SPC was initially a rival to the city's reformist labour groups. The SPC may have been responsible for defeating of centrist labour candidate Fred Dixon in the election of 1910. The resulting backlash from trade union groups weakened the SPC in Winnipeg for a number of years.

The Socialist Party of Canada showed poorly in the 1911 national election, however, and this carried over to the 1912 British Columbia provincial election, in which the party's support fell precipitously, diving once again below the 5,000 vote mark.[2] Even before this election the party saw its credibility further undermined by a scandal in which its parliamentary leader, J.H. Hawthornthwaite, was revealed to have engaged in land speculation in Vancouver and was pressured to resign prior to the vote.[3] Only two SPC members managed to gain election in British Columbia in 1912.[3] Two years later both of these defected to the Liberals, accentuating further the Socialist decline.[3] 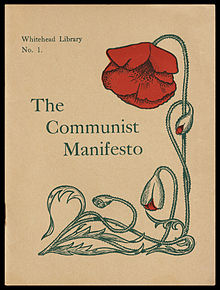 Cover of a pamphlet published during the years of World War I by the Socialist Party of Canada due to a ban on the publications of American Marxist publisher Charles H. Kerr & Co.

The SPC was instrumental in setting up One Big Union in Canada.

As a result of the Russian Revolution and the Winnipeg General Strike, a number of the SPC's supporters became attracted to Bolshevism and the ideas of Vladimir Lenin and Leon Trotsky. Although many did, not all those who rejected Leninism moved towards an evolutionary or gradualist socialist position. In 1920, a split occurred when many of the party's members left to join the Federated Labour Party of Canada, which was formed by the British Columbia Federation of Labour. Other SPC members joined Labour and Independent Labour parties that were being formed throughout the country. (See Labour Party.)

From 1903 to 1912, a number of SPC members were elected as Members of the Legislative Assembly (MLAs) in British Columbia. The apex of the party was in the 1912 election when it fielded 17 candidates, winning two seats in the legislature, and 11% of the popular vote. The pressures of having such a large caucus (up from two the previous election) caused fissures in the party, and it was wiped out in the next election. It never won another seat in BC.

Owing to the SPC's unfaltering opposition to the war in Europe, the party came under increasing government scrutiny and pressure following Canada's embroilment in the affair. In the fall of 1918 the Socialist Party's official publication, The Western Clarion, was banned by the government.[4] On January 11, 1919 a new publication called The Red Flag was launched by the SPC to work around the government ban of its predecessor.[4] The first issue of this publication noted the Canadian government's surveillance of its correspondence and use of the post office as a tool of policy:

"The official organ has been suppressed... Leaflets mailed have been confiscated and complaints ignored. Almost every letter which arrives at this office bears unmistakable signs of having been opened, though no censorship mark to that effect is on them. All such letters are unduly delated, being some four, five and six weeks in the mails before delivery....

"Moreover, letters and parcels which we have despatched have failed to reach their destination. The mail of individual party members also suffers from the same despicable secret censorship. Our protests and complaints to heads of departments result only in officially equivocal and evasive replies."[5]

The party was a marginal political force in Manitoba until 1920 when George Armstrong was elected to the Legislative Assembly of Manitoba for Winnipeg on a "united labour" list. Armstrong was defeated in 1922, due in part to opposition from communist politicians in the city.

In 1921, most of the Marxist members left the SPC to join the Workers Party, which was the legal wing of the new Communist Party of Canada. In 1925, the Socialist Party formally disbanded. Many of its remaining members joined the Independent Labour Party.