Socialism of the 21st century 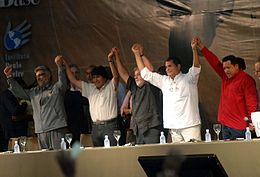 Socialism of the 21st century (Spanish: socialismo del siglo XXI) is an interpretation of socialist principles first advocated by German sociologist and political analyst Heinz Dieterich and taken up by a number of Latin American leaders. Dieterich argued in 1996 that both free-market industrial capitalism and 20th-century socialism in the form of Marxism–Leninism have failed to solve urgent problems of humanity such as poverty, hunger, exploitation of labour, economic oppression, sexism, racism, the destruction of natural resources and the absence of a truly participative democracy.[1] Socialism of the 21st century has democratic socialist elements, but it primarily resembles Marxist revisionism.[2]

Leaders who have advocated for this form of socialism include Hugo Chávez of Venezuela, Néstor Kirchner of Argentina, Rafael Correa of Ecuador, Evo Morales of Bolivia and Luiz Inácio Lula da Silva of Brazil.[3] Because of the local unique historical conditions, socialism of the 21st century is often contrasted with previous applications of socialism in other countries, with a major difference being the effort towards a more decentralised and participatory planning process.[2]

After a series of structural adjustment loans and debt restructuring led by the International Monetary Fund in the late 20th century, Latin America experienced a significant increase in inequality. Between 1990 and 1999, the Gini coefficient rose in almost every Latin American country.[4] Volatile prices and inflation led to dissatisfaction. In 2000, only 37% of Latin Americans were satisfied with their democracies (20 points less than Europeans and 10 points less than sub-Saharan Africans).[5] In this context, a wave of left-leaning socio-political movements on behalf of indigenous rights, cocaleros, labor rights, women's rights, land rights and educational reform emerged to eventually provide momentum for the election of socialist leaders.[2] Socialism of the 21st century draws on indigenous traditions of communal governance and previous Latin America socialist and communist movements, including those of Salvador Allende, Fidel Castro, Che Guevara, the Zapatista Army of National Liberation and the Sandinista National Liberation Front.[2]

According to Dieterich, this form of socialism is revolutionary in that the existing society is altered to be qualitatively different, but the process itself should be gradual and non-violent, instead utilising participatory democracy to secure power, education, scientific knowledge about society and international cooperation. Dieterich suggests the construction of four basic institutions within the new reality of post-capitalist civilisation:[1]

The model of socialism of the 21st century encourages economic and political integration among nations in Latin America and the Caribbean. This is often accompanied with opposition to North American influence. Regional organizations like ALBA, CELAC, Mercosur and UNASUR promote cooperation with Latin America and exclude North American countries. ALBA is most explicitly related to socialism of the 21st century while other organizations focus on economic integration, ALBA promotes social, political and economic integration among countries that subscribe to democratic socialism. Its creation was announced in direct opposition to George W. Bush's attempts to establish a Free Trade Area of the Americas that included the United States. In 2008, ALBA introduced a monetary union using the SUCRE as its regional currency.

Socialism of the 21st century was promoted by Venezuelan President Hugo Chávez, who differentiated it from previous movements

Former Venezuelan President Hugo Chávez called the process of social reforms in Venezuela the Bolivarian process. This approach is more heavily influenced by the theories of Istvàn Mészáros, Michael Lebowitz and Marta Harnecker (who was Chávez's adviser between 2004 and 2011) than by those of Heinz Dieterich. The process draws its name from Latin American liberator Simón Bolívar and is a contemporary example of Bolivarianism.

Often translated to good living or living well, the concept of buen vivir is related to the movement for indigenous rights and rights of nature. It focuses on the living sustainably as the member of a community that includes both human beings and Nature.[6] Buen vivir is enshrined in Ecuador's new constitution as an alternative to neoliberal development. The constitution outlines a set of rights, one of which is the rights of nature.[7] In line with the assertion of these rights, buen vivir seeks to change the relationship between nature and humans to a more bio-pluralistic view, eliminating the separation between nature and society.[7][8] This approach has been applied to the Yasuní-ITT Initiative. Buen vivir is sometimes conceptualised as collaborative consumption in a sharing economy and the term is used to look at the world in way sharply differentiated from natural, social or human capital.[9]

Critics claim that socialism of the 21st century in Latin America acts as a façade for authoritarianism. The charisma of figures like Hugo Chávez and mottoes like "Country, Socialism, or Death!" have drawn comparisons to the Latin American dictators and caudillos of the past.[10] According to Steven Levitsky of Harvard University: "Only under the dictatorships of the past [...] were presidents reelected for life", with Levitsky further stating that while Latin America experienced democracy, citizens opposed "indefinite reelection, because of the dictatorships of the past".[11] Levitsky then noted: "In Nicaragua, Venezuela and Ecuador, reelection is associated with the same problems of 100 years ago".[11] The Washington Post also stated in 2014 that "Bolivia's Evo Morales, Daniel Ortega of Nicaragua and the late Venezuelan president Hugo Chávez [...] used the ballot box to weaken or eliminate term limits".[12]

In 2015, The Economist stated that the Bolivarian Revolution in Venezuela—now under Nicolás Maduro after Chávez's death in 2013—was devolving from authoritarianism to dictatorship as opposition politicians were jailed for plotting to undermine the government, violence was widespread and opposition media shut down.[13] Western media coverage of Chávez and other Latin American leaders from the 21st-century socialist movement has been criticised as unfair by their supporters and leftist media critics.[14][15]

The sustainability and stability of economic reforms associated with governments adhering to socialism of the 21st century have been questioned. Latin American countries have primarily financed their social programs with extractive exports like petroleum, natural gas and minerals, creating a dependency that some economists claim has caused inflation and slowed growth.[16] For the Bolivarian government of Venezuela, their economic policies led to shortages in Venezuela, a high inflation rate and a dysfunctional economy.[17] However, the Chávez and Maduro governments have attributed Venezuela's economic problems to the decline in oil prices, sanctions imposed by the United States and economic sabotage by the opposition.[18]

In 2015, Venezuela's economy was performing poorly—the currency had collapsed, it had the world's highest inflation rate and its GDP shrank into an economic recession.[19] A 2017 NACLA analysis stated that "reductions in poverty and inequality during the Chávez years were real, but somewhat superficial. [...] [S]tructural poverty and inequality, such as the quality of housing, neighborhoods, education, and employment, remained largely unchanged".[20]

Although democratic socialist intellectuals have welcomed a socialism of the 21st century, they have been sceptical of Latin America's examples. While citing their progressive role, they argue that the appropriate label for these governments is populist rather than socialist.[21][22] Similarly, some of the left-wing pink tide governments were criticised for turning from socialism to authoritarianism and populism.[23][24]