The Société de transport de Montréal (STM; English: Montreal Transit Corporation) is a public transport agency that operates transit bus and rapid transit services in Montreal, Quebec, Canada. Established in 1861 as the "Montreal City Passenger Railway Company", it has grown to comprise four subway lines with a total of 68 stations, as well as over 186 bus routes and 23 night routes. The STM was created in 2002 to replace the Société de transport de la communauté urbaine de Montréal (STCUM). The STM operates the most heavily used urban mass transit system in Canada, and one of the most heavily used rapid transit systems in North America. As of 2011, the average daily ridership is 2,524,500 passengers: 1,403,700 by bus, 1,111,700 by rapid transit and 9,200 by paratransit service.[2]

Several other public transport companies existed prior to the creation of the STM. From 1861 to 1886, the Montreal City Passenger Railway Company operated a small network of horse-drawn trams (also called streetcars in North America).

In 1886, the company changed its name to the Montreal Street Railway Company. The first electric tram appeared in 1892 and was nicknamed the Rocket. The company underwent another name change in 1893: MSTR became the MTR for Montreal Island Beltline Railway. A year later, the network was fully electrified and in 1894, the last horse-drawn tram was taken out of service. From 1910 to 1911 the company was renamed Montreal Public Service Corporation before changing again to Montreal Tramways Company.

Although they were put into service in 1919, buses only began to be widely used starting in 1925, with the creation of several regular lines. Then in 1937, the first trolley buses were used. In 1939, the company had 929 trams, 224 buses and 7 trolley buses, serving about 200 million passengers per year. The replacement of tram lines by buses began in 1951, when a law was passed by the provincial government transferred the overall management of transport in Montreal to a public organization, the Commission de transport de Montréal (CTM). The last tram was withdrawn from service in 1959.

The Metro was inaugurated in 1966 and the same year saw the end of the trolley bus service. 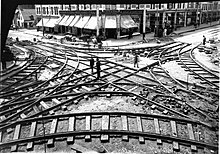 Tramway crossing under construction at Ste. Catherine and St. Lawrence in 1893
Main article: Streetcars in Montreal

The second regional service involved the management of two commuter train lines. On July 1, 1982, the CTCUM and the Canadian National Railway (CN) entered into an agreement to integrate the Montreal-Deux Montagnes commuter train line into the regular CTCUM bus and Metro network. The CTCUM paid CN to staff, run, and maintain the trains, while it set the fares and schedules. Passengers travelling within the CTCUM operating territory were able to transfer between the trains and the bus or Metro, no fare supplement was required to make a bus/Metro to train transfer . On October 1, 1982, a similar agreement with the Canadian Pacific Railway (CP) went into effect and CP's Montreal-Rigaud commuter train line was integrated into the CTCUM network.

On January 1, 1996, responsibility for the commuter trains was transferred to the Agence métropolitaine de transport (AMT) (now RTM), a Quebec provincial government agency formed to coordinate all public transportation in the metropolitan Montreal region.

Fares for the Metro and buses are fully integrated, a ticket entitling the passenger to a complete trip, regardless of the mode of transportation used or the number of transfers required (within a time frame of 120 minutes). The tickets come in various forms: magnetized tickets, weekly and monthly magnetized cards and magnetized cards for bus transfers are inserted in the appropriate card readers at turnstiles in the Metro, and in the terminals present when boarding the bus. Tickets for reduced fares are non-magnetized and must be presented upon entry.

The entire STM network can be accessed with the same fares, with the exception of the Metro stations located in Laval (Cartier, De La Concorde and Montmorency) and Longueuil (Longueuil–Université-de-Sherbrooke).

Rates are also partially integrated with those of the Réseau de transport métropolitain (RTM). There are five intermodal stations that provide correspondence between the Metro and commuter trains. Four of these stations are on the Orange line (Vendôme, Lucien-L'Allier, Bonaventure, De la Concorde) and one is on the Blue line (Parc).

The STM accepts cash, tickets (for Students and Seniors), as well as daily, weekly, and monthly passes. When a ticket or cash fare is used, a free transfer can be used for trips in one direction that are completed within two hours. Except for cash, these and other fares are stored on an OPUS card. Children 5 years of age and younger, accompanied by an adult, travel for free. Children under 5 cannot travel unaccompanied.[6] 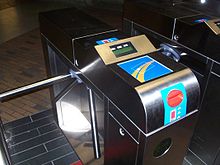 An OPUS card reader located at the Bonaventure Metro Station

On April 21, 2008, the STM unveiled the contactless smart card called OPUS (a word that phonetically includes the French word puce, which is the generic French word for the chip used in any type smart card [7]) as a means of fare payment. In preparation for this new step in Montreal's public transportation network, turnstiles which incorporate the reader and automated vending machines had already been installed in Metro stations; buses had previously been fitted with new fare boxes that incorporate the card reader, in order to ensure the uniformity of methods of payment across Montreal's transit network and that of its suburbs.

Costs to the STM related to the project were approximately $138 million, compared to the original estimated cost of some $100 million. The project was originally supposed to be implemented in 2006. In 2019, the STM announced plans to introduce improved OPUS card readers on buses beginning in 2020 in order to enable all-door boarding and debit card payment.[8]

Each stop on each route is assigned a number and some of these systems require a user to know the number.

All 68 Metro stations are equipped with the MétroVision information screens which displays advertising, news headlines and weather information from RDI and MétéoMédia, as well as STM-specific information regarding service changes, service delays and information pertaining to using the system.[10]

All 197 daytime bus routes and 23 night routes are wheelchair accessible. However, only one out of the four Metro lines is accessible to wheelchairs. The Orange line has 13 stations with elevators installed : Côte-Vertu, Snowdon, Lionel-Groulx, Bonaventure, Place d'Armes, Champ-de-Mars, Berri-UQAM, Rosemont, Jean-Talon, Henri-Bourassa, Cartier, De La Concorde, and Montmorency. All of the elevators can be reached from street level, except for the Bonaventure station, which goes between the ticket counter and train platform levels.[11]

Connections to other transit services

STM is connected to surrounding transit agencies such as:

The Service de police de la Ville de Montréal has a Unité métro (Metro Unit) that patrols Metro trains and stations. This unit has been in service since 2007.[14]

Since the start of Metro service in 1966, the STM (and predecessors) has had its own transit safety force. STM Transit Safety Agents are not armed with a firearm but are provided with a baton and handcuffs.

On May 10, 2012, smoke bombs were set off at Lionel-Groulx, Jean-Talon, Préfontaine, Fabre and Pie-IX stations, resulting in evacuations of the affected stations and a complete shutdown of the Metro for over two hours. The incident was not officially linked to the 2012 Quebec student strike.[15]

In 2009, a woman was arrested, handcuffed, and searched by STM officers for allegedly not holding an escalator handrail. Her case is now to be heard by the Supreme Court of Canada.[16]

The Montreal Metro rapid transit system was introduced in 1966 in preparation for the Canadian Centennial and Expo 67 World Fair in Montreal. Instead of traditional steel-wheeled trains, it is a rubber-tired metro, based on technology developed for the Paris Métro; Montreal's system was the first in the world to be entirely rubber-tired (as not all of Paris's lines use tires). The Metro system is Canada's busiest subway system in total daily passenger usage; in 2017, serving an average of 1,235,200 daily passengers on an average weekday; a figure which surpassed that of the Toronto subway and Vancouver SkyTrain.[17] In 2016, 354 million riders (transfers not included) used the Metro,[17] which since its opening had transported over 7 billion passengers as of 2010, roughly equivalent to the world's population.

Inside an STM LFS Novabus Artic.

The STM bus service operates well over 200 bus routes serving a number of different markets. These routes serve an average of 1,403,700 daily passengers each weekday.[2]

On August 30, 2010, the STM introduced the 10 Minutes Max network. This "network", overlaid on both the local and express networks described above, schedules buses at a maximum headway of 10 minutes, between 6 a.m. and 9 p.m., Monday to Friday, on 31 of the STM's busiest bus routes.[18] A few routes support that maximum headway only in the customary peak direction mornings and afternoons, while some routes outside of the advertised network attain similarly short headways but within shorter periods.

In early 2012, the STM announced a plan to convert its entire fleet of buses over to electric power by 2020.[citation needed] Beginning in 2012, all STM bus purchases will be either hybrids or electrics and, starting in 2011, Montreal will begin testing trolley buses (electric buses powered by overhead wires) on some of the city's busiest routes.[19]

The STM also operates ten taxibus lines where the creation of regular bus service is not feasible. Regular STM fares apply, except that no cash is accepted.[20]

The Société de Transport de Montréal operates a paratransit service for people with mobility problems. The lack of subway accessibility is critical for people whose mobility needs cannot be accommodated by stairs. STM's adapted transit is a system based on reservation, meaning that there is no room for flexibility. All trips must be booked at least one day in advance. Service began in April 1980. In first quarter, 2011, 9,200 trips were made through this service daily.[2]

The STM operates over 1,800 buses in its fleet. Since 2012 the active fleet is composed exclusively of buses from the Nova Bus LF Series.

Most STM bus routes terminate at loops, side streets or Metro stations.

Other smaller STM loops/terminals include

STM buses are operated out of a number of garages located around the city. They are Anjou, Crémazie, Frontenac, LaSalle, Legendre, Mont-Royal, Stinson, St-Denis, St-Laurent and St-Michel for Paratransit. The surface routes are divided into several divisions. Individual divisions have a superintendent, an on-duty mobile supervisor, a communications centre, and a garage facility tasked with managing the division's vehicle fleet and routes.

Metro trains are stored in the four garages at Angrignon, Beaugrand, Montmorency and Saint-Charles and there are three maintenance facilities at Duvernay, Plateau d'Youville and Viau. 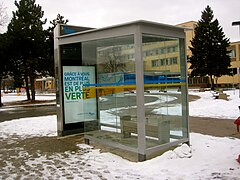 There are 8,500 bus stops in the STM network. Each stop has a panel that indicates the number of routes that stops there, the type of service, if the bus goes to a Metro or train station and the bus stop code enabling one to obtain the schedule by telephone at 514-AUTO-BUS. The STM is in the process of changing all its bus stop panels to a new modern pole that displays the route numbers. The route number is color-coded for the type of service it offers, dark blue is for regular routes, green is for express, metrobus and R-bus routes, black for night routes and gold for senior shuttles. Advertising is provided by CBS. On November 8, 2010 the STM launched 3 prototypes of modern bus shelters to replace the old ones. They will run on a solar power system and lights in the shelter are to be controlled by motion sensor. Bus shelters at high-traffic intersections feature an interactive screen where people can use hand gestures to access weather, news and bus route information. Since the introduction of GPS in the fleet, the screen can also be used to track busses on the route.[29]