Graupel (/ˈɡraʊpəl/; German: [ˈɡʁaʊpl̩]), also called soft hail or snow pellets,[1] is precipitation that forms when supercooled water droplets are collected and freeze on falling snowflakes, forming 2–5 mm (0.08–0.20 in) balls of rime.[2] The term graupel is the German language word for sleet.

Graupel is distinct from hail and ice pellets. Hail is common in thunderstorms, while graupel typically falls in winter storms. The METAR code for graupel is GS. 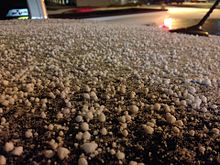 Graupel pellets in morning, having fallen the previous day

Under some atmospheric conditions, snow crystals may encounter supercooled water droplets. These droplets, which have a diameter of about 10 μm (0.00039 in), can exist in the liquid state at temperatures as low as −40 °C (−40 °F), far below the normal freezing point. Contact between a snow crystal and the supercooled droplets results in freezing of the liquid droplets onto the surface of the crystal. This process of crystal growth is known as accretion. Crystals that exhibit frozen droplets on their surfaces are often referred to as rimed. When this process continues so that the shape of the original snow crystal is no longer identifiable, the resulting crystal is referred to as graupel.[3] Graupel was formerly referred to by meteorologists as soft hail. However, graupel is easily distinguishable from hail in both the shape and strength of the pellet and the circumstances in which it falls. Ice from hail is formed in hard, relatively uniform layers and usually falls only during thunderstorms. Graupel forms fragile, oblong shapes and falls in place of typical snowflakes in wintry mix situations, often in concert with ice pellets. Graupel is also fragile enough that it will typically fall apart when touched.[4]

The frozen droplets on the surface of rimed crystals are difficult to see, and the topography of a graupel particle is not easy to record with a light microscope because of the limited resolution and depth of field in the instrument.

However, observations of snow crystals with a low-temperature scanning electron microscope (LT-SEM) clearly show cloud droplets measuring up to 50 μm (0.002 in) on the surface of the crystals. The rime has been observed on all four basic forms of snow crystals, including plates, dendrites, columns, and needles. As the riming process continues, the mass of frozen, accumulated cloud droplets obscures the form of the original snow crystal, thereby giving rise to a graupel particle.[3]

Graupel commonly forms in high-altitude climates and is both denser and more granular than ordinary snow, due to its rimed exterior. Macroscopically, graupel resembles small beads of polystyrene. The combination of density and low viscosity makes fresh layers of graupel unstable on slopes, and layers of 20–30 cm (8–12 in) present a high risk of dangerous slab avalanches. In addition, thinner layers of graupel falling at low temperatures can act as ball bearings below subsequent falls of more naturally stable snow, rendering them also liable to avalanche.[5] Graupel tends to compact and stabilise ("weld") approximately one or two days after falling, depending on the temperature and the properties of the graupel.[6]