Advertisement - You can get this game from STEAM
This article is about the mixture of solid and liquid water (e.g. water saturated snow). For other uses, see Slush (disambiguation).

Slush on a window in three different light settings

In the natural environment, slush forms when ice or snow melts. This often mixes with dirt and other materials, resulting in a gray or muddy brown color. Often, solid ice or snow can block the drainage of fluid water from slushy areas, so slush often goes through multiple freeze/thaw cycles before completely disappearing.

In areas where road salt is used to clear roadways, slush forms at lower temperatures than it would ordinarily in salted areas. This can produce a number of different consistencies over the same geographical area. 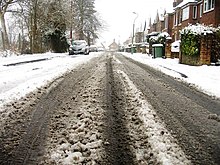 Because slush behaves like a non-Newtonian fluid,[3] which means it behaves like a solid mass until its inner shear forces rise beyond a specific threshold and beyond can very suddenly become fluid, it is very difficult to predict its behavior. This is the underlying mechanism of avalanches and their unpredictability and thus hidden potential to become a natural hazard.

Slush can also be a problem on an aircraft runway since the effect of excess slush acting on the aircraft's wheels can have a resisting effect during takeoff, which can cause an accident such as the Munich air disaster. Slush on roads can also increase the braking distances for cars and trucks, increasing the possibility of rear end crashes and other accidents.[4]

In some cases though, slush can be beneficial. When snow hits the slush, it melts on contact. This prevents roads from becoming too congested with snow or sleet.[5]