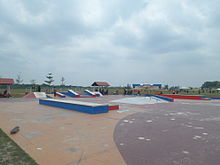 The first skatepark in the world, Surf City, opened for business at 2169 E. Speedway in Tucson, Arizona on September 3, 1965.[1] Patti McGee, Women's National Champion, attended the grand opening. The park had concrete ramps and was operated by Arizona Surf City Enterprises, Inc.[2] A skatepark for skateboarders and skaters made of plywood ramps on a half-acre lot in Kelso, Washington, USA opened in April 1966. It was lighted for night use.[3] California's first skatepark, the Carlsbad Skatepark opened on March 3, 1976. The World Skateboard Championships were held here on April 10, 1977. It operated until 1979, when it was buried intact beneath a layer of dirt for more than two decades, before being destroyed in 2005.[1] The current Carlsbad Skatepark is in a different location.[4] The East Coast's first skatepark, Ocean Bowl Skate Park, in Ocean City, Maryland, USA, opened the first week of June, 1976. It is the oldest operating municipal skate park in the United States. Due to time, wear and the current needs of skaters, the old bowl and ramp were torn down in the Fall of 1997 and the new park opened in July 1998. [5] In 1999 the City of Hermosa Beach, California opened a small skatepark at the site of the first skateboard competition. The competition held at the Pier Avenue Junior Hugh School (now a City museum) was organized by Dewey Weber across the street from his surf and skateboard shop. Makaha Skateboards was a sponsor of the competition.[6] In 1987 an all wooden indoor skate park opened in Bristol, CT called CT Bike that is still in business today over 20 years later. CT Bike is where Tony Hawk made his debut when he was just a young boy on his first East Coast tour. The indoor skate park today is still operated by the same family who built the park despite a fire that threatened the park in 1988.

In more extreme climates, parks were built indoors, often using wood or metal. By the end of the 1970s, the popularity of skateboarding had waned, and the original parks of the era began to close. A downturn in the overall skateboard market in the 1980s, coupled with high liability insurance premiums, contributed to the demise of the first wave of skateparks. Some second-generation parks, such as Upland, California's Pipeline, survived into the 1980s. However, few of the private parks of the 1970s remain, with the notable exception of Kona Skatepark in Jacksonville, Florida, United States.[7] However, many public parks of that era can still be found throughout Western Europe, Australia and New Zealand.[citation needed]

The modern skatepark designs of the Pacific Northwest can be traced back to Burnside Skatepark, a DIY "barge build" beneath the Burnside Bridge in Portland, Oregon. Skateboarders used an area populated primarily by the city's "undesirable elements" to create a skatepark, building one section at a time. The process is called "design/build" (D/B), and is a characteristic of many skateparks today. The design/build process ensures that adjacent skatepark features are harmonious and rideable, allowing skateboarders to create endless "lines" to ride among the many features.

Skate parks, related obstacles/ramps and locations designed for extreme sport utilization have made their way into the media over time, such as with the aforementioned Burnside Skatepark being included in the movie Free Willy.

Public skateparks have had a resurgence in the US, made possible by legislation such as California's 1998 law stating that skateboarding is an inherently "Hazardous Recreational Activity" (HRA), and therefore municipalities and their employees may not be held liable for claims of negligence resulting in skateboarders' injuries.

Street skating has blurred the line between skateparks and street spots. Some cities are starting to put in skate spots/plazas with features that would not have been classically designed for skateboarding, but can be skated by street skaters legally. In some instances, street spots that were not originally designed for skateboarding have been converted into sanctioned skate plazas.

There is also an emerging movement of making art and sculpture skate-able. This provides additional legal skate spots that blend well with other city art and landscape features. Skate-able art allows for the creation of thriving multi-use areas, as installations often become picturesque destinations for skaters and non-skaters alike.

Unlike organized sports, like basketball or football, skateboarding has no set arena or rules and skateparks have no standard design template. Each skatepark is designed specifically to provide unique challenges to its users. There are, however, three main categories of skatepark design: bowl, street plaza and flow parks.

Bowl parks are designed to emulate and improve upon the pool skating experience. Skaters in bowl parks can move around the park without taking their feet off the board to push. The curved walls of bowls allow skaters to ride around and across the bowl in addition to the back and forth skating you might see on a traditional half pipe. Bowls and bowl parks come in an endless variety of shapes and sizes but most bowls are between 3' and 12’ deep.

Street plaza parks are the favorite of the vast majority of skaters and they are designed to emulate and improve upon the street skating experience. Obstacles in a street plaza are styled to look like natural street terrain such as stairs, railings, planters and benches. Skaters will push off with their feet to gain momentum in a street plaza. The first public outdoor skate plaza is the Vancouver Skate Plaza, built in 2004 by New Line Skateparks.

Flow parks (or Park style) combine elements of both bowl parks and street plazas. In a well designed flow park a skater can pump around the parks curved walls such as quarter pipes, pump bumps and bowl corners without taking their feet off to push. They can use that speed to hit street obstacles such as stairs, railings and benches.

Skatepark construction can be divided into two major categories — prefabricated and custom built concrete. Prefabricated parks can be made of wood, plastic, sheet metal, and concrete. Most are designed and built by playground equipment manufacturers who present these parks as a cost-effective alternative to custom-designed concrete skateparks. In reality, custom built concrete skateparks can be quite cost competitive with prefabricated skate ramps.

According to an editor of Transworld Skateboarding magazine, concrete parks are now "pretty much the industry standard" as they require fewer repairs and less maintenance.[8]