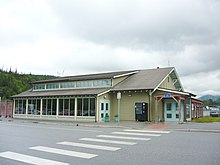 The airport does not have a tower, but does have a small passenger building at the south end. Skagway is known as a very windy place. In the summer the wind generally blows from the south and can be quite strong and gusty. In the winter the wind turns around and blows from the north. The airport is situated in a north-south direction and against the west side of the valley next to the Skagway River. There have been a number of fatal accidents over the past decades, generally by privately owned aircraft owners who did not understand the tight constraints of the path of landings and takeoffs. It is wise to talk to an experienced pilot from one of the airlines to understand the issues.

There have been landings at this airport by small jet aircraft, but rarely. At the south end, in the summer, there is a commercial helicopter tourist company that flies multiple craft throughout the day. Rarely, seaplanes have landed in the ocean and taxied to the small boat harbor, but a new wave-wall that was constructed a few years ago makes that option more difficult. Also, the wind can make the ocean very choppy at times.

The following airlines offer scheduled passenger service at this airport: