Iceland The Blue Fox (novel) I&#39;ve Seen It All
Icelandic writer
This is an Icelandic name. The last name is patronymic, not a family name; this person is referred to by the given name Sigurjón or Sjón. 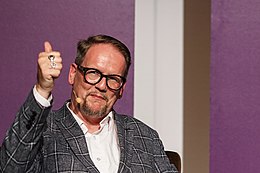 Sigurjón Birgir Sigurðsson (born 27 August 1962), known as Sjón (/ˈsjoʊn/ SYOHN), is an Icelandic poet, novelist, and lyricist. His pen name (meaning "sight") is an abbreviation of his given name (Sigurjón). Sjón frequently collaborates with the singer Björk and has performed with The Sugarcubes as Johnny Triumph. His works have been translated into 30 languages.[1]

Born in Reykjavík, Iceland, Sjón began his writing career early and published his first book of poetry, Sýnir (Visions), in 1978. He was one of the founding members of the neo-surrealist group Medúsa and became significant in Reykjavik's cultural scene.[2]

Active on the Icelandic music scene since the early 1980s, Sjón has collaborated with many of the best known artists of the era and was featured as guest vocalist on a rare Sugarcubes 12" single "Luftgitar" in 1987 using the name Johnny Triumph; this was accompanied by a music video of Sjón playing air guitar with Björk and Einar Örn Benediktsson. Sjón would occasionally reprise this role for the final encore of The Sugarcubes concerts, including the band's one-off 2006 reunion show in Reykjavík.

Sjón was featured in the documentary Inside Björk. In 2007, he contributed the original story and wrote the screenplay for the animated film Anna and the Moods. He also joined the cast, voicing the character Dr. Artmann.[3]

Sjón has lived and worked in London. He currently resides with his wife and two children in Reykjavík. 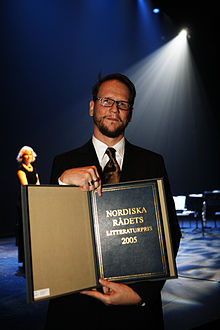 Sjón was nominated for an Academy Award and a Golden Globe for the song "I've Seen It All" from the film Dancer in the Dark.[4]

In 2016 Sjón became the third writer chosen to contribute to the Future Library project.[5]