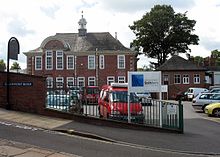 A sixth form college is an educational institution, where students aged 16 to 19 typically study for advanced school-level qualifications, such as A-levels, Business and Technology Education Council (BTEC) and the International Baccalaureate Diploma, or school-level qualifications such as General Certificate of Secondary Education (GCSE) examinations. In Singapore and India, this is known as a junior college. The municipal government of the city of Paris uses the phrase "sixth form college" as the English name for a lycée.[1]

In England and the Caribbean, education is currently compulsory until the end of year 13, the school year in which the pupil turns 18.[note 1][2] In the English state educational system, pupils may either stay at a secondary school with an attached sixth form, transfer to a local sixth form college, or go to a more vocational further education college, although in some places there may in practice be little choice which of these options can be taken. In the independent sector, sixth forms are an integral part of secondary schools (public schools), and there is also a number of smaller-scale independent sixth form colleges. In Wales, education is only compulsory until the end of year 11.

Students at sixth form college typically study for two years (known as Years 12 and 13 – Years 13 and 14 in Northern Ireland – or lower sixth and upper sixth). Some students sit AS examinations at the end of the first year, and A-level examinations at the end of the second. These exams are called C.A.P.E. (Caribbean Advanced Proficiency Examination) in the Caribbean. In addition, in recent years a variety of vocational courses have been added to the curriculum.

Another school, Hassanal Bolkiah Boys' Arabic Secondary School, is a government sixth form centre for students in the specialised Arabic stream. Instead of A Level subjects, students generally learn subjects pertaining to Islamic knowledge in Arabic medium. The schooling culminates in the sitting of Sijil Tinggi Pelajaran Ugama Brunei (STPUB), translatable as the Higher Certificate of Brunei Religious Education. They may then proceed to Islamic universities, locally or abroad such as Al-Azhar University.

In the English-speaking Caribbean, there are many sixth form colleges, usually attached to secondary schools. Students must usually attain a grade A-C in 1–3 in the Caribbean Examinations Council (C.X.C) CSEC examinations before proceeding onto the sixth form to sit the CAPE examinations. Students that fail these exams are not accepted into the sixth form program and can do either: courses in other further education facilities, or begin work with high school degrees.

Scotland does not, in general, have separate sixth form colleges (or, indeed, the same concept of the terminal two years of secondary education as being distinct from the other time spent there); as such, Scottish students who opt to remain in full-time education will typically remain in the same school for fifth and sixth year (the equivalent to the English lower- and upper-sixth forms), studying Higher Grade and Advanced Higher qualifications. Higher Grade qualifications can be taken in both the fifth and sixth years.

The first comprehensive intake sixth form college in England was established in Mexborough, South Yorkshire[3], and took its first intake of students in September 1964. Since then sixth form colleges have spread across the UK and have proved popular with students, their parents, and other groups in the community. Until 1992, these colleges were controlled and funded by local education authorities (LEAs), but the Further and Higher Education Act 1992 transferred all institutions within the sector to the Further Education Funding Council for England (FEFC), a national agency with strategic responsibility for the operation of general further education (FE) colleges. Later the FEFC's functions were taken over by the Learning and Skills Council (LSC), a reorganisation that included changes in the funding and supervision of sixth form colleges.

These colleges take responsibility for their own employment, pensions and pay arrangements with the support and advice of the Sixth Form Colleges' Association (SFCA, formerly SFCF).[4] The SFCA is made up of representative principals from SFCs across the UK. The SFCA sets up several committees to deliver its range of support services for SFCs as well as facilitating lobbying work with the central government. Colleges for the most part do not charge full-time daytime students; however, adult students (most of whom attend evening classes) may have to pay a fee (for examinations, tutors' time and other costs).

There are also some sixth form colleges in the independent sector, specialising in A levels for which fees are paid; these are unconnected with the SFCA.