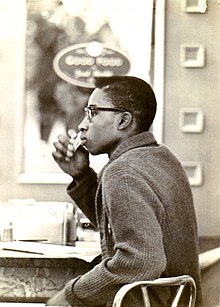 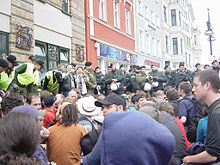 Spontaneous sit-in in front of a McDonald's in Rostock, Germany

A sit-in or sit-down is a form of direct action that involves one or more people occupying an area for a protest, often to promote political, social, or economic change. The protestors gather conspicuously in a space or building, refusing to move unless their demands are met. The often clearly visible demonstrations are intended to spread awareness among the public, or disrupt the goings-on of the protested organisation.

The Fellowship of Reconciliation (FOR) and the Congress of Racial Equality (CORE) conducted sit-ins as early as the 1940s. Ernest Calloway refers to Bernice Fisher as "Godmother of the restaurant 'sit-in' technique."[1] In August 1939, African-American attorney Samuel Wilbert Tucker organized the Alexandria Library sit-in at the then-racial segregated library.[2] Congress of Industrial Organizations (CIO) labor delegates had a brief, spontaneous lunch counter sit-in during their 1947 Columbus, Ohio convention.[3]

In one of the earliest use of sit-ins against racism, followers of Father Divine and the International Peace Mission Movement joined with the Cafeteria Workers Union, Local 302, in September 1939 to protest racially unfair hiring practices at New York's Shack Sandwich Shops, Inc. According to the New York Times for September 23, 1939,[4] on Thursday between 75 and 100 followers showed up at the restaurant at Forty-first Street and Lexington Avenue, where most of the strike activity has been concentrated, and groups went into the place, purchased five-cent cups of coffee, and conducted what might be described as a kind of customers' nickel sit down strike. Other patrons were unable to find seats."[5]

In May 1942, James Farmer, Jr., an organizer for the Fellowship of Reconciliation, led a group of 27 people to protest the racially discriminatory no-service policy of the Jack Spratt Diner on 47th Street in Chicago. Each seating area in the diner was taken by groups that included at least one black person. The peaceful patrons, several from the campus of the nearby University of Chicago, then tried to order; all were refused. The police were called, but when they arrived they told the management that no laws were being broken, so no arrests were made. The diner closed for the night but thereafter, according to periodic checks made by CORE activists, it no longer enforced its discriminatory policy.[6]

With the encouragement of Melvin B. Tolson and Farmer, students from Wiley and Bishop Colleges organized the first sit-in in Texas in the rotunda of the Harrison County Courthouse in Marshall. This sit-in directly challenged the oldest White Citizens Party in Texas and would culminate in the reversal of Jim Crow laws in the state and the desegregation of postgraduate studies in Texas by the Sweatt v. Painter (1950) verdict. Sit-ins were an integral part of the nonviolent strategy of civil disobedience and mass protests that eventually led to passage of the Civil Rights Act of 1964 which ended legally sanctioned racial segregation in the United States and also passage of the Voting Rights Act of 1965 that struck down many racially motivated barriers used to deny voting rights to non-whites.

One of the earliest lunch counter sit-ins of the Civil Rights Movement was started by a group of Morgan State College (now University) students and the Baltimore chapter of CORE. Their goal was to desegregate Read's drug stores. The peaceful impromptu sit-in lasted less than one half an hour and the students were not served. They left voluntarily and no one was arrested. After losing business from the sit-in and several local protests, two days later the Baltimore Afro-American newspaper ran a story featuring Arthur Nattans, Sr., then President of Read's who was quoted saying, "We will serve all customers throughout our entire stores, including the fountains, and this becomes effective immediately". As a result, 37 Baltimore-area lunch counters became desegregated.[7][8]

At another early sit-in, the "Royal Seven", a group of three women and four men from Durham, North Carolina, sat in at the Royal Ice Cream Parlor on June 23, 1957, to protest practices of segregation.[9] The activists were arrested and charged with trespassing. Their efforts are now recognized via historical markers in Durham. They went to court three times; each case ended in their being found guilty.

This sit-in for the purpose of integrating segregated establishments began on July 19, 1958, in Wichita, Kansas, at Dockum Drugs, a store in the old Rexall chain.[10] In early August, the drugstore became integrated, then remainder of Dockum stores in all of Kansas. A few weeks later on August 19, 1958, in Oklahoma City, a nationally recognized sit-in at the Katz Drug Store lunch counter occurred. The Oklahoma City Sit-in Movement was led by NAACP Youth Council leader Clara Luper, a local high school teacher, and young local students, including Luper's eight-year-old daughter, who suggested the sit-in be held. The group quickly desegregated the Katz Drug Store lunch counters. It took several more years, but she and the students, using the tactic, integrated all of Oklahoma City's eating establishments. Today, in downtown Wichita, Kansas, a statue depicting a waitress at a counter serving people honors this pioneering sit-in.[11]

Following the Oklahoma City sit-ins, the tactic of non-violent student sit-ins spread. The Greensboro sit-ins at a Woolworth's in Greensboro, North Carolina, on February 1, 1960, launched a wave of anti-segregation sit-ins across the South and opened a national awareness of the depth of segregation in the nation.[12] Within weeks, sit-in campaigns had begun in nearly a dozen cities, primarily targeting Woolworth's and S. H. Kress and other stores of other national chains.[13]

The largest and best-organized of these campaigns were the Nashville sit-ins, whose groundwork was already underway. They involved hundreds of participants, and led to the successful desegregation of Nashville lunch counters.[14] Most of the participants in the Nashville sit-ins were college students, and many, such as Diane Nash, James Bevel, Bernard Lafayette, and C. T. Vivian, went on to lead, strategize, and direct almost every aspect of the 1960s civil rights movement. The students of the historically black colleges and universities in the city played a critical role in implementing the Nashville sit-ins.[citation needed]

The Friendship Nine was a group of African American men who went to jail after staging a sit-in at a segregated McCrory's lunch counter in Rock Hill, South Carolina in 1961. The group gained nationwide attention because they followed the Nashville student's strategy of not bailing themselves out of jail and called it "Jail, No Bail",[15][16][17][18][19] which lessened the huge financial burden civil rights groups were facing as the sit-in movement spread across the South. They became known as the Friendship Nine because eight of the nine men were students at Rock Hill's Friendship Junior College. They are sometimes referred to as the Rock Hill Nine.[20]

In January 1962, Bernie Sanders, then a student at the University of Chicago, helped lead a sit-in in protesting university president George Wells Beadle's segregated campus housing policy. "We feel it is an intolerable situation, when Negro and white students of the university cannot live together in university-owned apartments," Sanders told a crowd of about 200 students. After several days of protests, Beadle met with students to form a commission to investigate discrimination.[21][22]

An early version of the Rehabilitation Act of 1973 was vetoed by President Richard Nixon in October 1972.[31] Later in 1972, Disabled in Action demonstrated in New York City with a sit-in protesting this veto. Led by Judith Heumann, eighty activists staged this sit-in on Madison Avenue, stopping traffic.[32]

Initially Joseph Califano, U.S. Secretary of Health, Education and Welfare, refused to sign meaningful regulations for Section 504 of the Rehabilitation Act of 1973, which was the first U.S. federal civil rights protection for people with disabilities.[33] After an ultimatum and deadline, demonstrations took place in ten U.S. cities on April 5, 1977, including the beginning of the 504 Sit-in at the San Francisco Office of the U.S. Department of Health, Education and Welfare. This sit-in, led by Judith Heumann and organized by Kitty Cone, lasted until May 4, 1977, a total of 25 days, with more than 150 people refusing to leave. It is the longest sit-in at a federal building to date. Joseph Califano signed the regulations on April 28, 1977.[34][35][36][37][38][39]

In 1969 there was a sit-in at the University of Chicago to protest the firing of feminist sociology professor Marlene Dixon.[40] On February 12, 1969, a faculty committee chaired by Hanna H. Gray, Associate Professor of History, concluded that no violation of normal appointment procedures had occurred, but recommended that Dixon be offered a one-year terminal reappointment since the resolution of her status had been delayed by the controversy surrounding the decision; Dixon refused.[41] On February 15, the protestors still sitting-in voted to stop.[41] In March 1969, at the decision of University disciplinary committees, forty-two students involved in the Administration Building sit-in were expelled, eighty-one were suspended, and three were placed on probation.[41]

A "Statement on the University of Chicago sit-in" was included in the feminist anthology Sisterhood is Powerful: An Anthology of Writings From The Women's Liberation Movement (edited by Robin Morgan, published in 1970); this statement refers to the Marlene Dixon sit-in.[41][42][43]

In March 1970, feminists held an 11-hour sit-in at the Ladies' Home Journal's office, which resulted in them getting the opportunity to produce a section of the magazine that August.[44]

The sit-in began on June 22, 2016, when members of the House Democratic Caucus declared their intention to remain on the floor of the United States House of Representatives until its Republican Speaker, Paul Ryan, allowed votes on gun safety legislation in the aftermath of the Orlando nightclub shooting.[45]

A group of the Democrats ultimately occupied the floor through the night, only leaving on the afternoon of June 23. None of the measures demanded by the occupying members were given a vote.[46]

In April 1965, 150 gender non-conforming people held a sit-in at Dewey's Coffee Shop in Philadelphia to protest the fact that the shop was refusing to serve young people in "non-conformist clothing".[47] Reports at the time referred specifically to the restaurant's discriminatory denials of service to "homosexuals," "masculine women," and "feminine men."[48] After three protesters refused to leave after being denied service they, along with a black gay activist, were arrested. This led to a picket of the establishment organized by the black LGBT community. In May another sit-in was organized and Dewey's finally agreed to end their discriminatory policies.[49]

On April 21, 1966 gay activists of the Mattachine Society of New York (MSNY) conducted a "Sip-In" at Julius' Bar at 10th Street.[50] This established the right of gay people to be served in licensed premises in New York.[51] This action helped clear the way for gay premises with state liquor licenses. 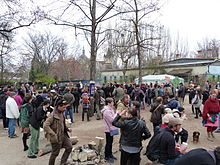 Eco-protesters occupied the area of the Kertem (Városliget, Budapest, Hungary) for a protest against the building plans in Városliget (City Park, Budapest).[citation needed]

The Azadi March (Freedom March) led by Imran Khan of Pakistan Tehreek-e-Insaf (PTI), and Inqilab March (Revolution March) led by Muhammad Tahir-ul-Qadri of Pakistan Awami Tehrik (PAT) are political,[52] aiming at a probe of election rigging by Nawaz Sharif, as well as restoration of "true democracy and social, political and economical reforms." The Azadi March started on 14 August 2014 and ended on 17 December 2014. It is considered to be the longest-lasting public sit-in in Pakistan's history. Concepcion Picciotto's sit-in was the more long-lasting sit-in, but on an individual level.

During apartheid a number of sit-in protests against the country's policy of racial segregation were staged in South African embassies in the United States.[53] In post-apartheid South Africa two notable sit-ins were the occupation of South African universities to protest high tuition during the FeesMustFall protests and the Greenmarket Square refugee sit-in to protest for the resettlement of refugees to third countries due to xenophobia.