Sirenia is a Norwegian gothic metal band from Stavanger, Norway founded in 2001 by Morten Veland.

In January 2001, Veland, a founding member of Tristania left the band, within a few weeks Veland had a new band along with three other members.[3] He had written material for Tristania's next release but because of the split, he used it towards Sirenia's debut album At Sixes and Sevens with other new material written for it as well. The band entered the studio by November or December 2001. The band failed to find a suitable singer prior to recording in France, so they hired a session female singer named Fabienne Gondamin.[3]

On the subsequent tour Fabienne Gondamin was replaced by Henriette Bordvik, with whom the band recorded the album An Elixir for Existence and the EP Sirenian Shores.

On 5 November 2007 Monika Pedersen quit the band over musical disagreements. Her departure caused Sirenia to pull out of a planned European tour with Therion.

Sirenia began looking for a new singer in November 2007.[5] The process in finding their newest member took about six months. About 500 applied, at the end they wanted to find someone from the EU region for practical reasons.[5] On 9 April 2008 Sirenia announced Spanish X Factor contestant Ailyn as their new female vocalist.[6]

On 19 May 2008 it was announced that Bjørnar Landa left the band in order to have more time for his family and studies. He was replaced by Michael S. Krumins (Green Carnation).

On 12 June 2008 Sirenia announced that for the first time in their career, they had decided to work with a bass player for their live shows. The session bass player will be Kristian Olav Torp.

Sirenia started recording their fourth album in July 2008. It was recorded in Sound Suite Studios, France and Stargoth Studios, Norway. The mixing and mastering took place in Antfarm Studios, Denmark with Tue Madsen. The album, called The 13th Floor, was completed in September and the release date was 23 January 2009. The album features guest appearances by Jan Kenneth Barkved. The first single, "The Path to Decay", was released on 26 December 2008 as a digital download. 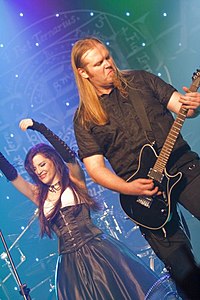 Ailyn and Morten Veland in March 2010

On 8 July 2010, the band announced that they started recording a new album. It was finished in November, and will be titled The Enigma of Life. It was released on 21 January 2011.

The first single, "The End of It All", was released on 21 December 2010 as a digital download. 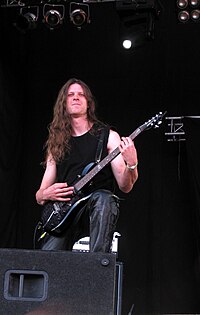 On 19 April 2011, Michael left Sirenia to put in more time on his own bands and projects. Jan Erik Soltvedt joined the band and filled in as the lead guitarist. Soltvedt accompanied Sirenia on their American and European tours in 2011, including the Gallus Sonorus Musicallis festival (GSM Fest) held in June 2011 in Barcelos, Portugal, and the Wacken Festival in Germany, held in August.

On July 16, 2011, and as one of their most important performances of that year, was held at the famous heavy metal festival Masters of Rock, which takes place annually in the city of Vizovice, Czech Republic. Previously, their first and only participation dates from 2008.

By the end of July and the beginning of August 2011, Sirenia made their second Latin American tour, which took them back to countries such as Mexico, Brazil, Argentina and for the first time to Peru and Chile in October.

On 16 October 2012 Sirenia announced that they have entered the studio to record their next album for an early 2013 release. The band on their sixth album, "The progress on the new album is going very well — we feel confident that the sixth Sirenia album will have some nice surprises up its sleeve, as we‘ve been determined to make this record somewhat different from the previous two albums".[7]

On 13 April 2013 the band announced the title of their album on their Facebook page: Perils of the Deep Blue.[8] Their single "Seven Widows Weep" was released through Nuclear Blast on May 12, 2013. On June 3, 2013, the official music video of the song was released. It was filmed in April of the same year in Serbia by iCODE Team.[8]

Perils of the Deep Blue represented the first Sirenia album in US charts, such as the Billboard Hard Rock Albums and the Heatseekers Albums.[9]

The band announced they had returned to Napalm Records on 3 April 2014 with a pending album release for early 2015.[1] On 10 February 2015 Sirenia announced the title of their next record called The Seventh Life Path.[8] On 12 March 2015 the band announced on their Facebook page that Nightwatcher Films has signed Sirenia for the use of their song "Ducere Me In Lucem" of Perils of the Deep Blue for its soundtrack. The song will come out in the opening title sequence of a film called Abandoned Dead penned for release January 2016.[8][10]

On 5 July 2016 Sirenia announced that after 8 years they were parting ways in good terms with longtime vocalist Ailyn [11] but that the work with the upcoming album will proceed as normal.[8] The same day, Ailyn Released a statement disputing the bands claim, saying that the decision was not hers and she wasn't a part of it.[11]

On 29 August 2016 Sirenia revealed eighth full-length album Dim Days of Dolor before their official announcement of their new singer.

On 8 September 2016 Sirenia announced their new singer Emmanuelle Zoldan, a French mezzo-soprano singer from Aix-en-Provence who has worked with Sirenia for 13 years and is part of The Sirenian Choir.[12] She has contributed to lead vocals before on the Sirenian Shores EP cover of "First We Take Manhattan" by Leonard Cohen.[13]

Sirenia toured with Arkona and MindMaze in May 2017 for their debut in the United States and Canada.[14]

On August 14, 2018, Sirenia had revealed the title of their ninth full-length album Arcane Astral Aeons, along with a European tour in the fall. The album was released October 26 of the same year.[17][18]

A lyric video was made for the single "Love Like Cyanide" released on 21 September 2018. The song features a guest appearance by Yannis Papadopoulos from Finnish band Beast In Black.[19] On October 12, "Into the Night" was released as the second single, followed by a music video. Both videos were directed by Swedish filmmaker and musician Owe Lingvall.[20]

As of August 2020, Emmanuelle Zoldan was confirmed to be in the studio, recording her vocals for the next Sirenia album.