Sir John Rose, 1st Baronet GCMG PC QC (2 August 1820 – 24 August 1888) was a Scots-Quebecer politician. In Canada, he was a member of the Legislative Assembly of the Province of Canada and the Executive Council of the Province of Canada. He held the offices of Solicitor General of Canada, Minister of Public Works and Minister of Finance. In the United Kingdom, he held the offices of Receiver General of the Duchy of Cornwall and Privy Counsellor.

John Rose was born 2 August 1820, at Gask, near Turriff, Aberdeenshire. He was the son of William Rose (b. 1792), of Gask, and Elizabeth (d. 1822), daughter of Capt. James Fyfe.[2] John's father, William, was a great-grandson of Hugh Rose (d. 1755), 16th Laird of Kilravock Castle and Chief of Clan Rose. The estate of Gask had passed to John's father through his ancestor, Lt.-General Alexander Forbes (d. 1672), 10th Lord Forbes.[3] John Rose was educated at Udny Academy and King's College, Aberdeen. 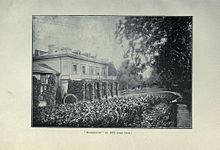 Rear view of Rosemount House in Montreal's Golden Square Mile. Built by Sir John Rose in 1848, it was his home until 1872.

In 1836, he immigrated to Huntingdon, Quebec, in what was then Lower Canada, where he was active in suppressing the Lower Canada Rebellion of 1837. He was admitted to the bar in 1842 and established a commercial practice in Montreal. From 1857 until 1867, he was a member of the Legislative Assembly of the Province of Canada, and he was a member of the Executive Council from 1858 until 1861.

He was Lower Canada's Solicitor General from 1857 to 1858 and from 1858 to 1859, and he also acted as various times as commissioner of public works and Receiver General. In 1864, the British government appointed him to the commission to settle claims under the Oregon Treaty with the United States.

Rose was elected to the House of Commons of Canada for the electoral district of Huntingdon, Quebec on 20 September 1867, and was later appointed Minister of Finance in the government of Sir John A. Macdonald. He resigned from Parliament on 29 September 1969, to return to private life with the banking firm of Morton, Rose and Co.[4]

Rose was a delegate to the Colonial Conference in London in 1867 and again in 1868. In 1869, Rose moved to England to practice law and acted as an unofficial representative of the Canadian government. His was one of the very first missions of a partly diplomatic nature which Canada ever sent abroad. He was sent partly because his was perceived as being "gentlemanly" enough for the world of London politics. He worked for Canada's interests in trade and immigration, and lobbied for Canada's viewpoint on matter of Anglo-American relations. In this function, he answered directly to the Prime Minister of Canada, Sir John A. Macdonald, since it was an informal position and was therefore not under the purview of the Governor General, meaning that communications could be kept secret from the Imperial Government. As well, Canada did not have a foreign affairs department at the time. This unusual situation did lead to a tradition of direct executive involvement in foreign affairs in Canada which still exists.

He also sat on a number of Royal Commissions in Britain and became a baronet in 1872, and a member of the Imperial Privy Council in 1886. Following his passing in 1888, Sir John Rose was interred in Guildford, England, near the Loseley Park estate, which he had rented for some years.

Grave at Mount Cemetery in Guildford.

His granddaughters Mrs. Edith Mary Bibby and Mrs. Baird were two of the noted beauties of the day, and their portraits by Fildes, R.A. (former) and by Shannon (latter) were exhibited at the Royal Academy, 1896. They were the daughters of Major-General Sir Stanley de Astel Calvert Clarke, K.C.V.O., C.M.G. Mrs. Edith Mary Bibby married Frank Bibby, of Sansaw, Shrewsbury, England, 1890, and the couple had two sons and two daughters.[5]