Born in Edinburgh, Scotland, Fergusson was the eldest son of Sir Charles Fergusson, 5th Baronet, and his wife Helen, daughter of David Boyle. He was educated at Cheam, Rugby, and University College, Oxford (although he left without taking a degree). He entered the Grenadier Guards in 1851 and served in the Crimean War where he was wounded. He retired from the army in 1859.

Fergusson served as Governor of South Australia from 1868. In November 1872 he was appointed governor of New Zealand and left Adelaide on 6 December for a short visit to England before taking up the post.[1]

He was Governor of New Zealand between 1873 and 1874, when he resigned and returned to England.[1]

Following his retirement, he returned to the House of Commons, as Member of Parliament for Manchester North East, which he represented between 1885 and 1906. He again held political office as Under-Secretary of State for Foreign Affairs between 1886 and 1891 and as Postmaster General between 1891 and 1892 in Lord Salisbury's Conservative administration. 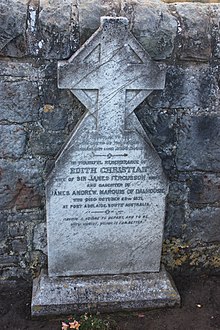 Fergusson married firstly Lady Edith Christian, daughter of James Broun-Ramsay, 1st Marquess of Dalhousie, in 1859. They had two sons and two daughters. Lady Edith died on 20 October 1871 in Port Adelaide in Australia, aged 32. She was buried at North Road Cemetery in Adelaide.[2] There is a memorial headstone in the north-west corner of the first western extension to Inveresk churchyard in Scotland.[3]

Fergusson married secondly Olive, daughter of John Henry Richman, in 1873. Olive was born in South Australia, and they were married soon after arriving in New Zealand.[1] They had one son. She died of cholera in January 1882.

He married thirdly Isabella Elizabeth, daughter of Richard Twysden and widow of Charles Hugh Hoare, in 1893. They had no children. Fergusson's son Charles and grandson Bernard Fergusson both became Governors-General of New Zealand.

Fergusson was killed in an earthquake in Jamaica in 1907, aged 74.

The town of Jamestown and the County of Fergusson in South Australia, Fergusson Island in Papua New Guinea and Fergusson College in Pune (in his day, Poona), India are named in Fergusson's honour.[4][5]