Web colors Black Blue
This article is about the color. For the chemical element, see Silver. For other uses, see Silver (disambiguation).
"C0C0C0" redirects here. It is not to be confused with Cococo. 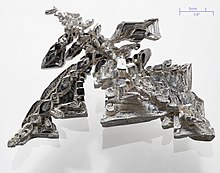 Silver or metallic gray is a color tone resembling gray that is a representation of the color of polished silver.

The visual sensation usually associated with the metal silver is its metallic shine. This cannot be reproduced by a simple solid color, because the shiny effect is due to the material's brightness varying with the surface angle to the light source. In addition, there is no mechanism for showing metallic or fluorescent colors on a computer without resorting to rendering software which simulates the action of light on a shiny surface. Consequently, in art and in heraldry one would normally use a metallic paint that glitters like real silver. A matte grey color could also be used to represent silver.

The first recorded use of silver as a color name in English was in 1481.[1] In heraldry, the word argent is used,[2] derived from Latin argentum over Medieval French argent.

Displayed at right is the web color silver.

Since version 3.2 of HTML "silver" is a name for one of the 16 basic-VGA-colors.

Silver has been a Crayola color since 1903.

Crayola silver is not a neutral grayscale color, but rather a warm gray with a very slight tinge of orange-red.

The color silver pink is displayed at right.

The color name silver pink first came into use in 1948.

The source of this color is the Plochere Color System, a color system formulated in 1948 that is widely used by interior designers.[5]

At right is displayed the color silver sand.

The color name silver sand for this tone of silver has been in use since 2001, when it was promulgated as one of the colors on the Xona.com Color List.

At right is displayed the color silver chalice.

The color name silver chalice for this tone of silver has been in use since 2001, when it was promulgated as one of the colors on the Xona.com Color List.

At right is displayed the color Roman silver.

Roman silver, a blue-gray tone of silver, is one of the colors on the Resene Color List, a color list widely popular in Australia and New Zealand.

At right is displayed the color old silver.

Old silver is a color that was formulated to resemble tarnished silver.

The first recorded use of old silver as a color name in English was in 1905.[10]

Sonic silver is a tone of silver included in Metallic FX crayons, specialty crayons formulated by Crayola in 2001.