Siglufjörður is a small fishing town in a narrow fjord with the same name on the northern coast of Iceland.

The municipalities of Ólafsfjörður and Siglufjörður, connected since 2010 by the Héðinsfjörður Tunnels, merged in 2006 to form a municipality called Fjallabyggð, which literally means Mountain Settlement.

Siglufjörður is the site of The Herring Era Museum, a maritime museum which opened in 1994.[3] The town forms the setting for Ragnar Jónasson's Dark Iceland series of detective novels. It is also the setting for the first season and much of the second season of the internationally successful Icelandic crime drama television series Trapped.

The town grew up around the herring industry that was very strong in the 1940s and 1950s. Herring fishing is no longer productive in the region.

Siglufjörður was connected with a road for the first time in 1940, when the horse riding trail through Siglufjarðarskarð [is] was improved enabling cars to get through. Before that ships, seaplanes, horses and strong legs provided the transport.

Today the town remains dependent on fishing industries. The government of Iceland is attempting to reverse the population shrinking in the area by improving land transportation. The dual Héðinsfjörður Tunnels, with a total length of 11 km (6.8 mi), were dug between Siglufjörður and Ólafsfjörður to connect with the region of Eyjafjörður in the east, and opened on 2 October 2010. Siglufjörður was already connected by the 800 m Strákar Tunnel to the west; it used to be the town's only road connection open year-round. That tunnel was completed in 1967 and before then the only road to the town was a narrow mountain pass between Siglufjörður and Héðinsfjörður, open only during the summer. The new tunnel opened interesting mountain tracks and trout fishing opportunities to those without boats and unwilling to walk the old trail.

The old road to Siglufjörður is open during the summer. It is the highest mountain road in Iceland and is used today for hiking, horseriding and pleasure driving. 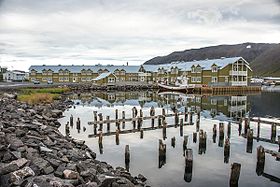 The new hotel at Siglufjörður

There have not been regular flights to Siglufjörður for many years, but private small planes make frequent landings. The closest airport with scheduled flights is in Akureyri, an hour's drive from Siglufjörður.

Siglufjörður does not experience polar night at the December solstice; the shortest daylight hours in Siglufjörður is 2 hours 39 minutes, from 11:54 UTC until 14:33 UTC on 21 December.[4]