The Shrine of Meher Ali Shah is a 20th-century Sufi shrine that serves as the tomb of the Peer Meher Ali Shah, an early 20th-century Sufi scholar of the Chisti order,[1] who was also a leader of the anti-Ahmadiya movement. The shrine is located within the Islamabad Capital Territory, in the village of Golra Sharif. Now-a-days Golra Sharif is widely known for one of its custodians (Sajjada Nasheen) Pir Syed Naseer Uddin Naseer Gilani. At present this spiritual place's custodian (Sajjada Nasheen) is Peer Syed Shah Abdul Haq Gilani the younger son of Babuji.[2][3]

The mausoleum is situated in the village of Golra Sharif, near the Margalla Hills, in the Islamabad Capital Territory, Pakistan. The shrine is situated an altitude of about 520 m (1,710 ft) above sea level.

Peer Mehr Ali Shah died on 11 May 1937[4] and was succeeded by Babuji. The construction of the mausoleum took nearly twenty years to be fully completed. For this purpose, Marble was brought from the Makrana mines in Jodhpur State.[5] 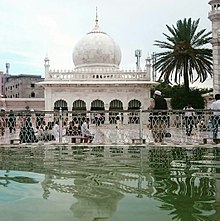 Another view of the Mausoleum.