Shoppers Drug Mart Corporation is a Canadian retail pharmacy chain based in Toronto, Ontario.[5] It has more than 1,300 stores operating under the name Shoppers Drug Mart in nine provinces and two territories, and as Pharmaprix in Quebec.[2]

The company was founded by pharmacist Murray Koffler in 1962;[2] the Koffler family still retains ownership of the Super-Pharm pharmacy, which has locations in Israel, Poland, and formerly in China (as Ensure from 2005 to 2011).[6] Super-Pharm's logo is similar to that of Shoppers Drug Mart, which was created by the artist Sylvain Liu. It also uses some of the same private-label brands, such as Life Brand and Quo.

In 2014, Brampton-based Loblaw Companies Limited acquired Shoppers Drug Mart Corporation for $12.4 billion in cash and stock.[7] By early 2016, Shoppers had over 1,300 locations in Canada.[8] 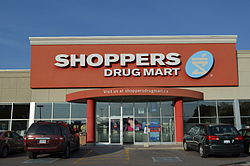 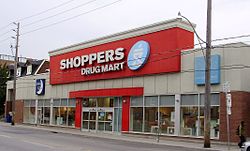 Shoppers Drug Mart in a historic building in downtown Toronto

At the age of twenty, Murray Koffler inherited two Koffler's Drugs pharmacies, first at 376 College Street[11] and second on Bathurst Street north of St. Clair Avenue West, then opened a suburban location at Don Mills Centre on the advice of E.P. Taylor.[12] By 1962, Koffler's had grown to a chain of 17 pharmacies, which he renamed "Shoppers Drug Mart" in the 1970s. The first store named "Shoppers Drug Mart" was at Shoppers World Danforth from which it derived the name.

Koffler revamped the concept of the 20th century “drug store” in Canada by removing the soda fountain and emphasizing the dispensary, requiring his pharmacists to wear starched white coats as a symbol of their professionalism. In the mid-1950s, he began acquiring other drug stores and organized them around a then-novel franchising concept: pharmacist “associates” would own and operate their own stores within the system and share in the profits. In 1968, Shoppers Drug Mart grew to 52 stores in Ontario by merging with 33 Plaza Drugstores. In 1971, Shoppers Drug Mart purchased 87 Cunningham Drug Stores in British Columbia and Alberta. In 1974, Lord's Supervalue Pharmacies 26 stores in Atlantic Canada joined the Shoppers Drug Mart family. In 1986 Shoppers Drug Mart bought Super X Drugstores, an Ontario-area chain of 72 stores. In 1992, the company bought up the Western Canadian chain Pinder's Drugs, and followed this in 1995 with a chain of 24 Bi-Rite Drug Stores based in western Canada. Also in 1995, Shoppers Drug Mart acquired 135 Big V Drugstores. In 1996, the first Shoppers Home Health Care store opened.

When Koffler retired in 1986, he sold the chain to Imasco Limited. That same year, David Bloom, a former Shoppers Drug Mart pharmacist, was appointed Chief Executive Officer of the Company. Bloom would lead the organization until retiring in 2001, having devoted a total of 35 years of service to the Company. During David Bloom's tenure, Shoppers doubled its number of stores, quadrupled its sales and increased profit ten-fold. David Bloom also launched the Shoppers Optimum loyalty program in 2000 which quickly became the largest and most successful loyalty program in Canada. The Optimum program currently boasts over 10 million members in Canada.

In 2001, Glenn Murphy was appointed Chairman and Chief Executive Officer of the Company. In November of that same year, Shoppers Drug Mart Corporation was publicly listed on the Toronto Stock Exchange.

In 2002, Shoppers Drug Mart introduced its first large format stores, with more space, a sleek and modern look, and a stronger focus on cosmetic products. Typically the cosmetics section faces the entrance, with the pharmacy counter at the back and a convenience food section, called Food Essentials, near the front cash. In most suburban areas, this new format takes the form of new or relocated store, typically stand-alone "big-box" locations as opposed to smaller mall or strip-mall locations.

In 2003, Shoppers Drug Mart introduced its first beautyBOUTIQUE, setting a new standard for the industry with its open-sell display and unbiased approach to customer service in prestige cosmetic retailing. Today, there are 364 beautyBOUTIQUES across the country.

In recent years, the chain has been moving to decrease its reliance on pharmaceutical sales and increase sales of what it calls "front of store" items, such as food and cosmetics. The store claims that in 2012, it increased its market share in food and that 51% of purchases now come from non-pharmaceutical items.[14]

In September 2018, Health Canada's approved the chain as a licensed medical marijuana producer, the first step before it can begin dispensing medical cannabis. The company does not intend to actually produce the product but had signed supply arrangements with companies such as Aurora Cannabis, Aphria, Inc., MedReleaf Corp. (owned by Aurora) and Tilray Inc., pending approval of its application for a license.[15] On 17 October 2018, cannabis became legal for recreational use across Canada, but Shoppers has not given any indication that it has an interest in recreational sales. Its parent company, Loblaw Companies Ltd., had applied to (and won the right to) sell the product for such use in Newfoundland and Labrador.[16]

Customers can earn points through the PC Optimum program, formerly Shoppers Optimum. Members collect points that may be redeemed on purchases within the store. Shoppers Optimum members receive 15 points for every dollar spent at the store, excluding the purchase of lottery, tobacco products, transit tickets and passes, prescription items, any products containing codeine, Canada Post products, and gift cards that are not for the chain itself.[20] Events for bonus point collecting and redemption (e.g., 20× the points, bonus redemption) are regularly held.