Shona /ˈʃoʊnə/[6] (chiShona) is a Bantu language of the Shona people of Zimbabwe. It is one of the most widely spoken Bantu languages.

The larger group of historically related languages (called Shona languages by linguists) also includes Ndau (Eastern Shona) and Karanga (Western Shona), but speakers of those languages prefer their distinct identities and usually reject any connection to the term Shona.

Wikipedia in the Shona language.

Man teaching Shona with a blackboard; the words on the board are pfeka ("dress self") and hembe ("shirt").

Shona is a written standard language with an orthography and grammar that was codified during the early 20th century and fixed in the 1950s. In the 1920s, the Rhodesian administration was faced with the challenge of preparing schoolbooks and other materials in the various languages and dialects and requested the recommendation of the South African linguist Clement Doke.

The first novel in Shona, Solomon Mutswairo's Feso, was published in 1957. Shona is taught in the schools but is not the general medium of instruction in other subjects. It has a literature and is described through monolingual and bilingual dictionaries (chiefly Shona – English). Standard Shona is based on the dialect spoken by the Karanga people of Masvingo Province, the region around Great Zimbabwe, and Zezuru people of central and northern Zimbabwe. However, all Shona dialects are officially considered to be of equal significance and are taught in local schools.

Shona is a member of the large family of Bantu languages. In Guthrie's zonal classification of Bantu languages, zone S.10 designates a dialect continuum of closely related varieties, including Zezuru, Karanga, Manyika, Ndau and Budya, spoken in Zimbabwe and central Mozambique; Tawara and Tewe, found in Mozambique; and Nambya and Kalanga in Botswana and Western Zimbabwe. 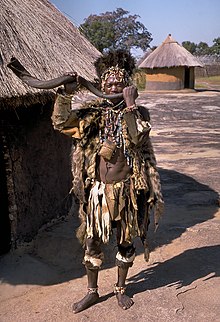 Shona speakers most likely moved into present-day Zimbabwe from the Mapungubwe and K2 communities in Limpopo, South Africa, before the influx of European, primarily British, colonizers. A common misconception is that the speakers of the Karanga dialect were absorbed into the Ndebele culture and language turning them into Kalanga. The Kalanga language is widely spoken in Zimbabwe and Botswana where the Ndebele were never present. The Kalanga language is thought to have been the language used by the Mapungubweans.[14] If this is accurate it follows that the Karanga dialect of Shona is a derivative of Kalanga. Karanga is closer to Kalanga than the rest of the aforementioned dialects. Karanga and Kalanga are both closer to Venda than the other Shona dialects.

Shona is used to refer to a standardised language based on the central dialects of the Shona region. Shona languages form a dialect continuum from the Kalahari desert in the west to the Indian Ocean in the east and the Limpopo river in the south and the Zambezi in the north. While the languages are related, evolution and separation over the past 1000 years has meant that mutual intelligibility is not always possible without a period of acculturation. Therefore, Central Shona speakers have a difficult time understanding Kalanga speakers even though lexical sharing can be over 80% with some western Karanga dialects. In the same manner eastern dialects (Shanga) spoken by the Indian Ocean are also very divergent. There are many dialect differences in Shona, but a standardized dialect is recognized. According to information from Ethnologue (when excluding S16 Kalanga):

Subdialects: Duma, Jena, Mhari (Mari), Ngova, Venda (not the Venda language), Nyubi (spoken in Matabeleland at the beginning of the colonial period is now extinct), Govera.

Languages with partial intelligibility with Shona, of which the speakers are considered to be ethnically Shona, are the S15 Ndau language, spoken in Mozambique and Zimbabwe, and the S13 Manyika language, spoken in eastern Zimbabwe, near Mutare specifically Chipinge . Ndau literacy material has been introduced into primary schools.

Maho (2009) recognizes Korekore, Zezuru, Manyika, Karanga, and Ndau as distinct languages within the Shona cluster, with Kalanga being more divergent.[5]

All syllables in Shona end in a vowel. Consonants belong to the next syllable. For example, mangwanani ("morning") is syllabified as ma.ngwa.na.ni; "Zimbabwe" is zi.mba.bwe.

Shona's five vowels are pronounced as in Spanish: [a, e, i, o, u]. Each vowel is pronounced separately even if they fall in succession. For example, "Unoenda kupi?" (Where do you go?) is pronounced [u.no.e.nda.ku.pi].

The consonant sounds of Shona are:

Shona's whistled sibilants are the fricatives "sv" and "zv" and the affricates "tsv" and "dzv".

Whistled sibilants stirred interest among the Western public and media in 2006, due to questions about how to pronounce the name of Morgan Tsvangirai, the leader of the Movement for Democratic Change – Tsvangirai in Zimbabwe. The BBC Pronunciation Unit recommended the pronunciation "chang-girr-ayi" /ˈtʃæŋɡɪreɪi/.[15][16]

Mupanda is the way in which Shona words are grouped:

There are 21 mupanda. Mupanda 20 was omitted because it is considered vulgar.

From 1931 to 1955, Unified Shona was written with an alphabet developed by the linguist Professor Clement Martyn Doke. This included the following letters:

In 1955, these were replaced by letters or digraphs from the basic Latin alphabet. For example, today ⟨sv⟩ or ⟨ş⟩ is used for ⟨ȿ⟩ and ⟨zv⟩ or ⟨z̧⟩ is used for ⟨ɀ⟩.