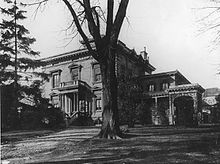 Sherbrooke Street (officially in French: rue Sherbrooke) is a major east-west artery and at 31.3 kilometres (19.4 mi) in length, is the second longest street on the Island of Montreal. The street begins in the town of Montreal West and ends on the extreme tip of the island in Pointe-aux-Trembles, intersecting Gouin Boulevard and joining up with Notre-Dame Street. East of Cavendish Boulevard this road is part of Quebec Route 138.

Sherbrooke Street East runs along the edge (both administrative and topographic) of the Plateau Mont-Royal, at the top of a marked hillside known as Côte à Baron, and continues between the Jardin Botanique de Montréal and Parc Maisonneuve to the north and Parc Olympique to the south. The street is named for John Coape Sherbrooke, the Governor General of British North America from 1816-18.[3]

In 1817, Sherbrooke Street initially consisted of two sections, from de Bleury Street to Sanguinet Street. Its relative remoteness from downtown at the time made it difficult to establish industries or factories. Many nursing homes and educational institutions were established on the street in the 19th century, such as McGill University, the École normale Jacques-Cartier, the Collège Mont-Saint-Louis, and the Couvent du Bon Pasteur.

From the early 20th century to the 1930s, Sherbrooke Street was the most prestigious street in Montreal. In 1912, the Montreal Museum of Fine Arts was established on Sherbrooke Street West. Later, with the expansion of the city centre, luxurious new houses were built a little farther west in the new Garden City of Westmount.

Sherbrooke Street was extended eastward from the early 20th century and followed the urban development of Montreal eastward. It was central to the creation of several institutions and parks such as La Fontaine Park, the Notre-Dame Hospital, Maisonneuve Park, Montreal Botanical Garden and Olympic Stadium.

In 1976, the street was to be venue for an 8 km exhibit of art entitled Corridart during the 1976 Summer Olympics. However, in a controversial decision, former Mayor Jean Drapeau had the exhibition torn down two days before the Games began.[4]

Three of Montreal's four major universities are on Sherbrooke Street. Downtown is the main campus of McGill University, and farther west is the Loyola Campus of Concordia University. The street also has UQAM's Complexe des sciences Pierre-Dansereau and INRS's Montréal campus as well as Dawson College, Collège de Maisonneuve CEGEPs, and the Collège de Montréal.